Port plays are all well and good, but pent-up demand for goods is likely to see the supply chain working overtime until American consumers finally put the credit card away. In dry bulk, coal trades are being given a boost as high gas prices incentivise a switch, while capes continue to fly past $80,000 rates. For tankers, well, their optimism knows no bounds, but sadly crude prices at seven-year highs and updated forecasts from oil producers have tempered expectations 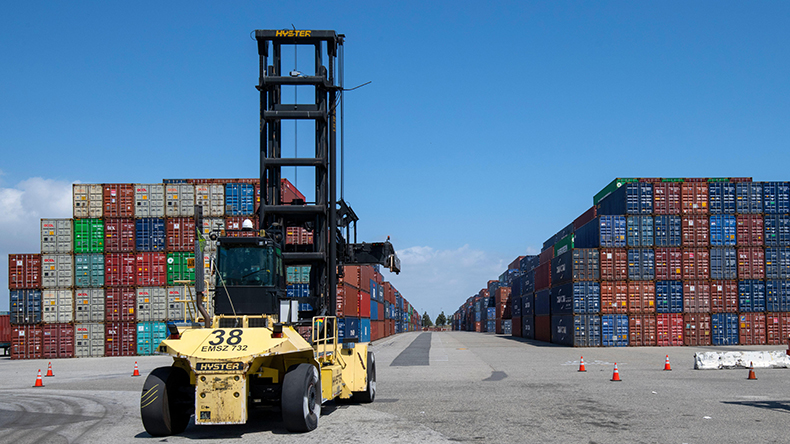 Source: Robert Schwemmer / Alamy Stock Photo Congestion at the two key US gateways, Los Angeles and Long Beach, has been rife since the start of the year.

There were few signs of any relief in the supply chain this week as the shippers continue to struggle to find capacity.

That search will be made more difficult as containerships continue to pile up at anchor in ports around the world. Over a tenth of global containership capacity is now effectively idle, not because it has nothing to carry, but because it is simply waiting for a berth.

Congestion at the two key US gateway ports, Long Beach and Los Angeles, has been rife since the beginning of the year. After easing to a degree in the second quarter, the peak season has seen records broken again.

But that now has passed over to the east coast and Gulf coasts, with terminals in Savannah and to a lesser extent Houston now also facing delays.

Onward distribution problems mean terminals can’t be held entirely responsible for the delays in the supply chain but it is notable that Hapag-Lloyd, which has largely spurned terminal investments in the past, is to now take a stake in Container Terminal Wilhelmshaven at Germany’s JadeWeserPort.

The carrier said that a reliable network required access to terminal space when required, and an ownership stake gave a level of control not available elsewhere. CTW is unlikely to be the last, either, with Hapag-Lloyd looking at adding several other terminals to its network.

Despite the issues surrounding container terminals, they remain good investments with their steady, predictable cashflows and long-term concessions. It was little surprise then that a Canadian pension fund picked up one of the jewels in the US ports crown with the acquisition of Ports America.

Canada Pension Plan Investment Board said it had agreed to acquire a stake in Ports America from funds managed by Oaktree Capital Management, making it the 100% owner of the terminal operator.

Elsewhere, however, efforts by CMA CGM to sell off the last two terminals in a package it arranged to sell to China Merchants Ports hit a road bump. Here the issues were not operational but geopolitical, with regulators in India and Vietnam failing to give the requisite regulatory approvals.

Changing terminal ownership is unlikely to resolve congestion any time soon, however, and there were warnings that the inability to move containerised goods through the supply chain could lead to a slump in volume growth in the fourth quarter.

That won’t, however, make the volumes go away. Pent-up demand for goods is likely to see the supply chain working overtime until American consumers finally put the credit card away.

Coal trades are being given a boost as high gas prices incentivise a switch to the “dirty commodity” even after taking into account the cost of carbon in Europe.

Coal shortages in China and India amid strong demand, low inventories and domestic supply issues will likely result in increased imported flows. China this week received a shipment of thermal coal from Kazakhstan, shipped on a capesize from the Russian port of Kavkaz to the Liuheng terminal in Zhejiang in eastern China.

In addition, there are reports that most of the bulkers that had been waiting for up to a year to discharge Australian coal have finally unloaded, although it is unclear whether these will be cleared by customs or stay in storage.

Meanwhile, capesize spot rates have continued to charge up, breaching the $80,000 per day mark in trading on Tuesday as tonnage tightness becomes more acute.

The average weighted time-charter closed Wednesday at $86,870 on the Baltic Exchange, the highest for the 180,000 dwt assessment which launched in 2014. The rates has gained 16% in a week with tightness reported in both the Atlantic and Pacific basins. Buyside analysts might be using the term ‘green shoots’ under highly qualified terms when they talk of seeing any recovery in moribund and loss-making tanker spot rates, but crude prices at seven-year highs and updated forecasts from oil producers place a metaphorical frost over such tender and delicate pronouncements.

As well as painting a challenging outlook for future oil demand over the next decade, the Organisation of the Petroleum Exporting Countries’ World Oil Outlook has cast doubt on refinery dislocation as a tonne-mile demand driver. Refined product flows are estimated to reach 19m bpd by 2025, before falling to the same level as 2019 in the following five years, to average 17.5m bpd. Opec highlighted how new refining capacity was seen in developing countries, with a preference for domestic supply.

The narrative of rising distance between the refinery and the end-consumer has been used by most listed product tanker owners and operators over the past year as one of the few positive indicators to lead an upward trajectory to an extended period of loss-making, unprofitable spot rates over the past 12 months.

All the while, there’s still no concrete sign of any fourth-quarter seasonal rebound in rates. Indeed, Opec’s decision this week to keep output at already agreed levels even as the global economic recovery is pushing up prices will lead to demand destruction in consuming economies like China. That in turn will retard any gain in exports, and maintain backwardation in the futures curve, two more negatives for freight rates.