Do the economics of carrying boxes on bulkers stack up?

With dry bulk freight rates, especially capesizes, soaring in the spot market, will bulker owners still be looking to help out shippers desperate to move containers?

Moving boxes on bulkers is a side-business perk under the current climate, but is it worth the effort given all the additional costs associated with extra fittings and downtime to install them, combined with training of crew and approvals by class and flag? 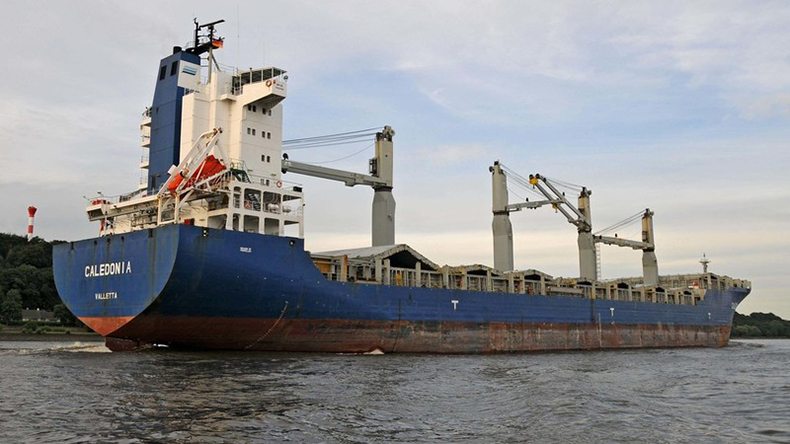 Bulk carrier Caledonia has a 1,874 teu container capacity, but this is rare vessel combination.

GIVEN the rapid rise in bulker freight rates, especially for capesizes, is the carriage of containers now looking less likely?

The novel trade, while technically possible, would require careful consideration and planning, not to mention time, given that bulk carriers were not designed to carry boxes. Logistics would also need to make sense, which is no small feat.

With spot capesize rates hitting the $74,000 per day mark, key operator Oldendorff said it has lost interest in the trade. If the daily rates dropped to $30,000 or below, it may be more inclined to see it through.

That echoes the view of a big charterer, who said that capesizes would have to be “significantly” lower from where they are today, or the difference between container rates and bulk rates to be sufficiently wide, for owners to manage the hassles involved with taking on the new risky trade.

While enquiries for boxes to be moved from China to the US were still being made for the smaller-sized bulkers up to ultramax, the volumes and bookings were limited. No fixtures have yet been reported for the bigger-sized bulk carriers.

Coronavirus impact may have been ultimate cause of last winter’s series of containers overboard incidents in the Pacific, WK Webster director argues

John Michael Radziwill, chief executive of C Transport Maritime, owner and operator of capesize and supramax tonnage, told Lloyd’s List that in the current “rewarding” market for dry bulk owners, it does not make much sense to move to the container market.

“Of course, the scenario might change going forward, as it is just a matter to compare the earnings between the two segments,” he said, adding that by making a dry bulk vessel ‘container ready’ you are ‘buying’ an option to quickly move between the two markets which can in turn be very lucrative.

“Having said that we do not believe it is something a dry bulk owner should absolutely do, just that the logic in pursuing this opportunity is sound.”

According to shipping association BIMCO, breakeven for bulker owners would be $5m, assuming offers of $5,000 per box, a voyage of 10 days and the carriage of 1,000 boxes.

That is in line with current dry bulk freight rates for a capesize carrying 200,000 tonnes of say iron ore from Western Australia to China, excluding the impact of congestion, and owners would need considerably higher offers from charterers or shippers to make it worth the while, said its chief shipping analyst Peter Sand.

The breakeven estimate assumes both short fronthauls, performed in a safe manner, and all else being equal. The calculations change if it is only a backhaul trade, taking loaded boxes and not used for repositioning of empties.

Owners will need to consider the merits on a case-by-case basis, factoring in where is the ship, do they need to reposition it and can they do it while carrying boxes, Mr Sand added.

With all the approvals that are required for the trade, now may not be the best time to do it, he said, as the first half of next year offers more chances to benefit, given that box rates are expected to stay elevated, while dry bulk may “may start to feel the force of seasonality”, he said.

Norway-based Golden Ocean said it had not dropped the idea and was still working with class and in-house commercial and operational teams, although it was looking less lucrative now with spot capesize rates going through the roof.

Some of its vessels were container-proof which meant that less work was needed to adjust them, but it still required class and other approvals, which could take up to a fortnight.

“This is a side-business and is not a driver of the market,” said the company’s chief executive Ulrik Andersen, adding that it was looking at combination trades such as iron ore and boxes.

Given container terminal size constraints and that capesizes would not fit, the boxes could be loaded and discharged in a lay-by berth, he said, limiting any impact from possible congestion and delays.

According to North Group’s director of loss prevention Colin Gillespie, carrying containers on bulk carriers is doable as long “as you do it properly and take care. But just because it is possible does not mean it’s right for every owner”.

Some enquiries have been made to the club on the matter during the past month because of the current container market, said its loss prevention executive John Southam.

At the extreme end, there are anecdotal reports of $30,000 being offered for 40 ft containers from Asia to the US east coast, while the more “normal” price of $15,000 was heard from Asia to Europe.

But, there is no single rate — shippers will pay up depending on how desperate they are, given the capacity crunch in the container sector.

The Shanghai Containerised Freight Index for Asia-USEC is at $11,250, which is the average of what shippers are paying, only for the freight element. There will be those who do a lot of cargo who will pay less, and urgent one-offs, that will be paying a lot more, plus surcharges.

Hapag-Lloyd chief executive Rolf Habben Jansen said the use of dry bulk vessels is not going to give much relief to the supply chain as they were inefficient and took up lots of port time.

They are “even worse than small feeders. I hope we don’t see too much of that, because it will do little to get rid of congestion”, he told a briefing this week.

With additional reporting by James Baker