Lloyd’s List’s weekly showing of the data and figures behind our news, analysis and markets coverage

Bulker freight rates have skyrocketed with congestion at Chinese anchorages showing little sign of easing, while new research highlights the cost burden for those bearing the brunt of the European Union’s emissions trading system 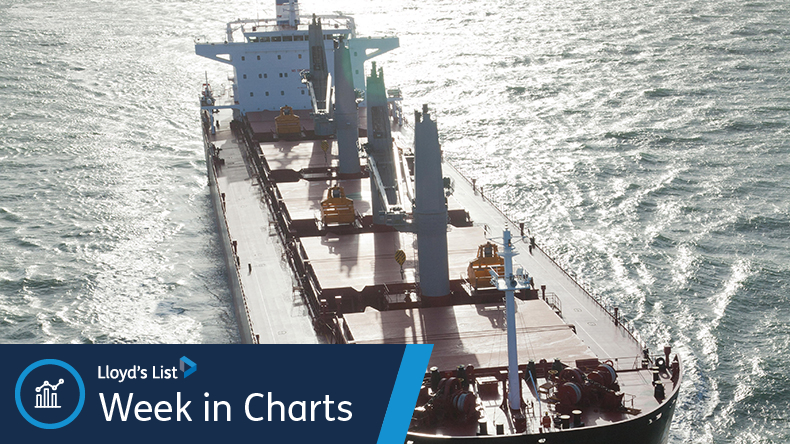 SUSTAINED congestion off the coast of China has prompted a surge in dry bulk freight rates as capacity is constrained.

Last week, Lloyd’s List Intelligence data showed 679 bulkers caught up in the logjam, representing around 5.5% of the dry bulk fleet, or 1 in 17 vessels.

In terms of capacity, capesizes were the most affected, at 20m dwt, or 108 vessels.

As a result, the average weighted capesize time charter surged to $61,683 per day at the close of Thursday (September 23) on the Baltic Exchange, the highest level for the 180,000 dwt assessment, which launched in 2014.

Counting the cost of the EU’s carbon bill

The shipping industry has still to appreciate the implications of who must pay under European Union’s emissions trading system, according to shipbroker Affinity Shipping.

Indeed, lessors in China that fund hundreds of new ships will count as beneficial owners who must buy carbon allowances under EU proposal, which begins in 2023.

The EU’s proposed emissions trading system for shipping would raise nearly $5.9bn annually at current carbon costs and comprise as much as 56% of the period charter rate for the biggest tankers sailing in the region, Affinity Shipping research shows.

Under Affinity’s calculations, a suezmax tanker that was chartered out for a year on a rate of $15,500 per day would have a carbon price of $8,660 added to the rate each day if it was trading wholly inside EU waters. That rate would halve to $4,330 daily for an international voyage.

Some containerised freight indices are showing signs that the period of rapid freight rate gains may be coming to an end.

Figures from the Shanghai Shipping Exchange showed little change in freight rates last week, with the Shanghai Containerised Freight Index up just 0.5%.
Rates on the transpacific were little changed at $6,322 per feu, while there was even a slight 0.2% fall on the Asia-Mediterranean trade.

It was the second consecutive week that the SCFI had registered no change on the transpacific and sub-2% changes on other key routes.


Drewry’s World Container Index also remained steady at $10,377.19 per feu, with rates on Shanghai to Rotterdam, Rotterdam to Shanghai, Shanghai to Los Angeles and Rotterdam to New York all remaining stable at the previous week’s level.

Leasing houses ‘on the hook’ for EU shipping carbon bill