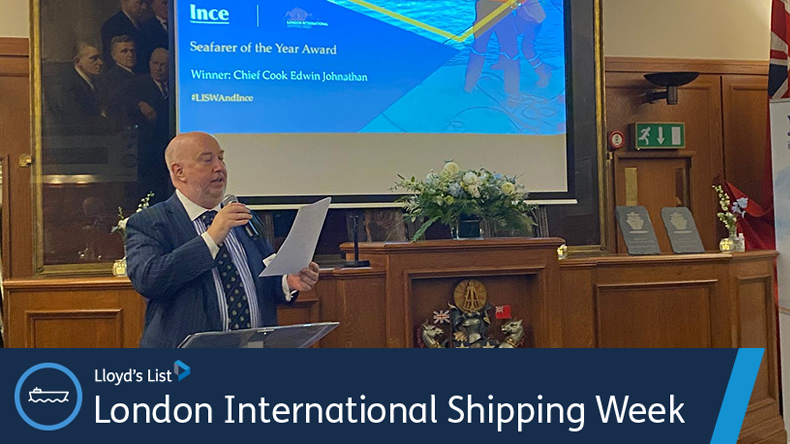 Clark: “These awards are a timely reminder that the individual seafarers were the unsung heroes of the pandemic and they have kept us all afloat through these troubled times.”

An awards ceremony was held this week to recognise extraordinary contributions from companies, master mariners and seafarers during the pandemic.

Backed by maritime law firm Ince, with Lloyd’s List on the judging panel, the inaugural awards held during London International Shipping Week sought to champion key workers at sea and raise awareness of the difficulties still being faced by seafarers internationally as a result of Covid restrictions on repatriation and crew changeovers.

In the first of our special London International Shipping Week daily editions of the Lloyd’s List Podcast we talk to Paddy Rodgers from the National Maritime Museum and Julian Clark from Ince, two of the driving forces behind a special awards ceremony celebrating the Unsung Heroes of shipping

“These awards are a timely reminder that the individual seafarers were the unsung heroes of the pandemic and they have kept us all afloat through these troubled times,” said Ince’s global senior partner Julian Clark.

“The panel of judges were overwhelmed by the stories of everyday heroism, resilience and above all the professionalism that shone through in every entry considered,” said Lloyd’s List Editor Richard Meade, who joined seafarer charities and industry executives on the judging panel to consider the winners.

“While the stories shortlisted for these awards barely scratch the surface of endeavours that deserve our collective recognition, the judges hope that by shining a light on the extraordinary efforts of these winners it will draw a wider appreciation of the vital role that seafarers and shipping play in the world.”

Below is the full list of winners in the company, master marine and seafarer categories, together with full citations from the judging panel.

The creation of the Seafarers International Relief Fund, which raised well over $1m to provide vital relief for seafarers and their families affected by the global pandemic, was a turning point in the crewing crisis. The rapid raising of funds offered a practical reaction to the urgent needs of thousands of crew, but it also created a coordinated response to the nebulous problems well beyond the influence of any individual or company alone.

SIRF quickly became a collective effort and the judges wanted to recognise the outstanding work of everyone involved, notably the coordination between seafarer charities including Mission to Seafarers, the Seafarers’ Charity, Sailors’ Society and ISWAN.

However, it was the work of Ardmore, in particular the company’s tireless chief operating officer Mark Cameron, who acted as the key catalyst to bring so many people together and make SIRF a reality.

Amid the myriad stories of innovative efforts to help seafarers, many of which will never get the recognition they deserve, the judging panel felt that SIRF represented the tenacity, compassion and sheer determination of the industry’s brightest and best to rally behind the global seafaring community.

Anyone can hold the helm when the sea is calm, said Publilius Syrus. But leadership has been tested across the industry this past year, particularly for those charged with the safety and security of ships and crew. All masters have been required to sustain morale in the most trying of circumstance, but many have been called to act above and beyond the call of duty and the entries for this award stand as a testament to the bravery, integrity and sheer grit of those leading teams at sea.

When Capt Normunds Rukins fought valiantly to save the life of his Electrical Engineer who had contracted Covid and deteriorated rapidly, he knew the risk of giving mouth to mouth in a bid to resuscitate him, but he did it anyway.

By all accounts Capt Rukins is a modest fellow who, if asked, will dismiss his actions simply a case of doing his duty. His crew, shoreside colleagues and the judging panel disagreed. Capt Rukins demonstrated excellent leadership in managing an already difficult situation and knowingly risked his own life to save others, all the while displaying the measured fortitude and judgement required to lead a team through a sustained period of extreme hardship.

The panel unanimously felt that his display of bravery, integrity and exemplary leadership deserved the award.

In judging this category the panel were deeply impressed with the many stories of exemplary leadership, but Capt Seul Gu’s stood out as worthy of a special mention. When looking for a winner the judges were keen to find examples of the morale-raising exploits that have kept crews going during extended periods and with Capt Suel, they found it in spades. Her efforts, by all accounts, went well beyond the call of duty in raising team morale and for that reason the judges felt that these awards should offer her a special commendation.

The kitchen is the beating heart of any vessel and the best cooks offer much more than simple sustenance. Like so many other seafarers Chief Cook Edwin Johnathan found himself working on board for well over 400 days, but throughout he kept the crew healthy and energised on many levels. The swift adaptation to Covid protocols in the kitchen required professionalism and consistency in adhering to detail. The fact that Edwin carried out all this under immense pressure, over such an extended period, while simultaneously looking out for his crew was a story worth celebrating, according to the judging panel.

While the judges were left in no doubt that similar stories could be told across hundreds, if not thousands of ships worldwide, the judges felt that Edwin’s story showcased the everyday resilience and professionalism displayed by seafarers globally, and to that end it was a story worthy of our attention.

Denmark to vaccinate seafarers in its ports