Methanol is gaining traction as a near-term route to shipping’s carbon reduction, despite green methanol production only accounting for a fraction of overall production. Methanol supporters argue that greater transparency is needed to fully account for lifecycle emissions of fuel choices and spur demand

Maersk has secured sufficient supplies of e-methanol to fuel its first dual-fuel feeder by 2023, but the race to scale up affordable supply chains for the carbon-neutral fuel is now on. Policy, collaboration and a more transparent carbon accounting across the lifecycle of fuel production is required Source: Maersk The world’s first methanol feeder will be 172 metres long and it is expected to join the Maersk fleet in mid-2023.

SIX months after it first committed to having a dual-fuel feeder ship running on carbon-neutral methanol by 2023 Maersk has finally secured a partnership capable of producing the 10,000 tonnes annual supply it needs to hit that target.

A new facility will be established in Denmark with Reintegrate — a subsidiary of the Danish renewable energy company European Energy — with the energy needed for the power-to-methanol production provided via a solar farm in Kassø, southern Denmark.

The Lloyd’s List Podcast: The race for green methanol is on

Methanol is the focus for this week’s podcast. Specifically, green methanol and how the industry can scale up the limited production of the truly carbon-neutral supply and move to a more transparent accounting of fuel choices via a ‘well-to-wake’ assessment of lifecycle emissions. Featuring in the discussions this week are: Berit Hinnemann, head of decarbonisation business development at AP Moller-Maersk...

The production may be small by global methanol industry standards, but the partnership is being touted as a potential blueprint to scale up green fuel production for shipping.

There are around 98m tonnes of methanol produced each year, emitting 300m tonnes of CO2 during its use and production, according to a recent report by the International Renewable Energy Agency and the Methanol Institute.

Yet less than 200,000 tonnes of this production is green methanol, most of it being bio-methanol.

According to Maersk, the Reintegrate partnership offers a much-needed route towards increasing the viability of green methanol as an industry-wide fuel choice rather than a small scale series of pilot projects.

“The upscaling of the production — that is the key challenge,” said AP Moller-Maersk head of decarbonisation business development Berit Hinnemann. “The technology is available, but we need to drive down production costs by scaling up the supply chain… because it is a supply chain that does not exist yet, and it can only be created in collaboration with parties across the value chain. That’s why we believe that this agreement is so important,” said Ms Hinnemann talking on the Lloyd’s List Podcast.

Following Maersk’s pledge to have a ship running on carbon-neutral methanol by 2023, the company has said that it will explore the use of carbon offsets — commonly known as ‘pay to pollute’ — in the future

Maersk has pledged that all its newbuilding vessels from 2023 onwards would be capable of running on carbon-neutral means. That will require a rapid scaling of operations if green methanol is going to account for the initial phase of that pledge.

According to Ms Hinnemann green methanol offers the most immediate pathway towards complete carbon neutrality covering the fuel’s entire lifecycle, from its production and distribution to its combustion by the vessel.

A carbon-neutral fuel means that throughout its lifecycle it will emit the same amount of CO2 as it will absorb. 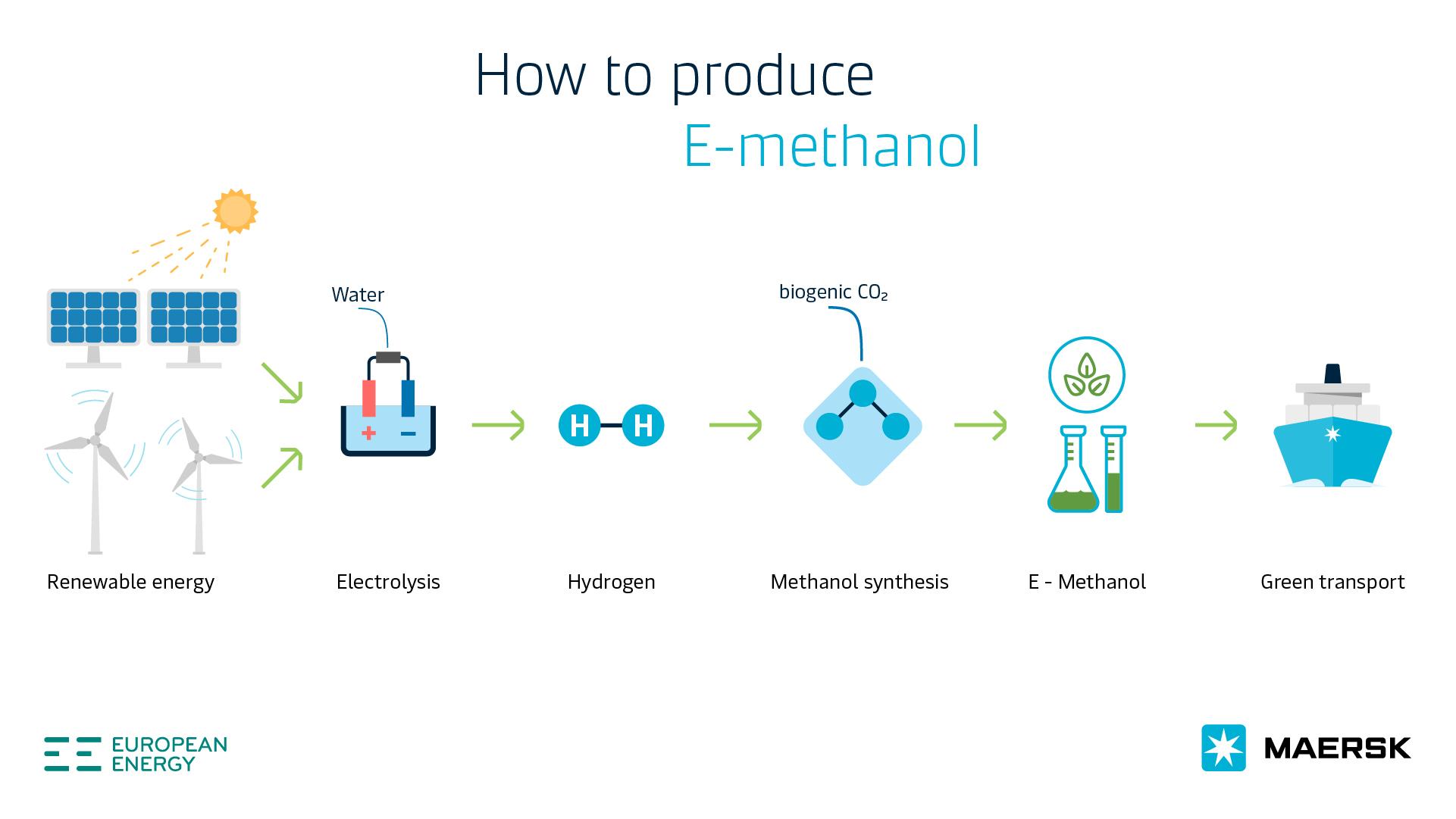 Green methanol can be produced either as bio-methanol based on biomass from sustainable feedstocks, or as e-methanol, which uses CO2 captured from renewable sources and green hydrogen.

Methanol today is widely produced, as it is used in the creation of other chemicals, but green methanol accounts for only a negligible fraction of it.

According to Methanol Institute chief operating officer Chris Chatterton the current production of 200,000 tonnes globally stem from around 20 individual projects in different stages of development, most of which are already starting to scale operations.

“E-methanol is able to reduce 94% of greenhouse gas compared with fossil alternatives such as liquefied natural gas, marine gasoil or even liquefied biogas, so its substantial savings and if we if we if we can rely on effective policy to be put in place then we will see a lot more of this type of fuel being produced and a lot more of it coming into the marine sector allowing those vessel owners and charterers to be able to really effectively manage their greenhouse gas reductions,” Mr Chatterton said, also speaking on the Lloyd’s List Podcast.

Apart from clarity of regulation, one of the key issues holding back demand for fuels like green methanol, according to Mr Chatterton, is a lack of transparency regarding the so-called lifecycle emissions of fuel production.

The Lloyd’s List Podcast: What the ‘code red’ climate report means for shipping

The consensus findings of the world’s leading climate scientists were issued this week as a ‘code red for humanity’. We are already too late to avert dangerous climate change and can only now manage the amount by which we overshoot our stated target, argues our guest on this week’s podcast, the leading climate expert of low-carbon shipping Dr Tristan Smith...

The Methanol Institute is one of several NGOs advocating for an end to the “tank-to-wake” measurement of greenhouse gas emissions which only account for emissions derived from onboard fuel combustion.

The alternative, more comprehensive approach, is the well-to-wake method of measuring maritime emissions. By considering emissions related to the full production cycle of fuels, policy makers can have a more complete picture of the environmental profile of marine fuels and in doing so determine a path to true, net carbon neutrality.

The Methanol Institute will be submitting one of several industry papers to the International Maritime Organization’s Marine Environment Protection Committee later this year urging the IMO to adopt this approach as a critical driver to the long-term lowering of GHG emissions from shipping.

Advocates of a well-to-wake accounting of greenhouse gases argue that it will create the closest thing to a level playing field in the long term and encourage the take up of truly renewable fuels.

Maersk’s first green methanol feeder is expected to join the Maersk fleet in mid-2023. It will sail in the network of Sealand Europe, a Maersk subsidiary, on the Baltic shipping route between Northern Europe and the Bay of Bothnia.

The Lloyd’s List Podcast, featuring Berit Hinnemann and Chris Chatterton will be published on Friday August 20. Previous editions of the podcast including the current edition which explores shipping’s decarbonisation pathways are available to listen to here.

MSC and Shell to collaborate on decarbonisation