How long will the Ningbo closure last? Plus: LA’s exports in freefall, and why co-operation between carriers and angry US shippers is better than hasty regulation 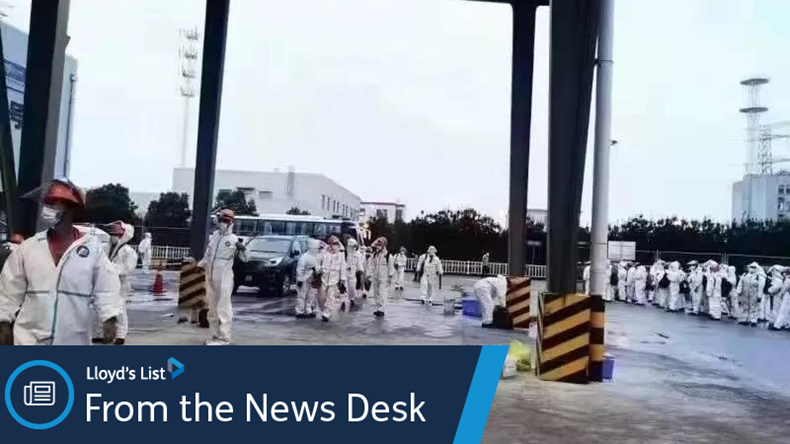 A dock worker who tested positive for coronavirus has led to closure of the Meishan terminal at Ningbo.

THE closure of the Meishan terminal at Ningbo, the world’s third-busiest box port, after a dock worker tested positive for coronavirus heaped yet more pressure on a supply chain already scarcely able to cope.

Boxships are piling up off Ningbo-Zhoushan and Shanghai — 110, or 588,405 teu, as of Wednesday — with carriers increasingly skipping Meishan.

In the US, more than 100 containerships are either in port or at anchor outside Los Angeles or Long beach as congestion worsens there, too. The port of Los Angeles’ latest throughput figures show continued rises in exports, but that loaded exports are in “freefall”.

So desperate is the capacity crunch that bulk carriers are increasingly being used to carry containers, a trick raising eyebrows among insurers.

Carriers are making hay on the Asia-US west coast route, as the capacity pinch drives up freight rates high enough for new lines to enter the fray.

Hapag-Lloyd predicted strong demand into next year as it reported a $1.5bn profit on revenues of $6.6bn for the second quarter of the year.

The Lloyd’s List View: That the fate of an entire industry rests on the infection status of a single employee shows the global supply chain is hanging by a thread.

See also: Janet Porter’s must-read on why tensions between carriers and angry US shippers are best resolved through working together, rather than hasty legislation.

And latest in our Sustainability Hub:

• Jiangnan Shipyard, a subsidiary of China State Shipbuilding Corp, has rolled out a design for carbon dioxide carriers that can run on ammonia;
• More than 75% of the existing fleet will need to sail more slowly or find other ways to abate CO2 emissions to comply with global regulations kicking in from 2023, a shipbroker claims;
• MOL has joined a green ammonia study with Australia’s Origin Energy.

Listen Out: Dr Tristan Smith, the leading expert in low-carbon shipping, joins us on the podcast to discuss what the IPCC’s latest climate change report means for shipping.

And Don’t Miss: With the hype of autonomous shipping wearing off, northern European equipment makers are turning to the technology to solve commercial problems.