The port of Beirut remains largely unchanged since the explosion on August 4, 2020, which left more than 200 dead. Infrastructure remains unrepaired and unreplaced while the bureaucratic logjams and inefficiencies that stymied progress long before the blast have only exacerbated existing problems with port operations

In the wake of the economic and political meltdown that has left Lebanon effectively operating as a bankrupt state, the devastation inside Beirut’s port one year on from the explosion that ripped it apart has registered as a mere blip in the country’s long downward spiral 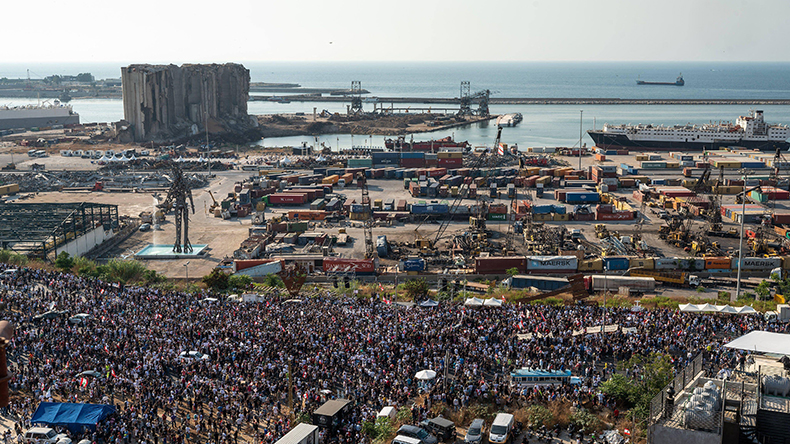 ONE year on from the explosion that destroyed much of Beirut’s port infrastructure the damage remains unrepaired as maritime operations limp on amid a social and economic crisis.

While the impact of the blast on August 4, 2020, which left more than 200 dead and more than 6,500 injured, has reduced overall vessel traffic calling in Beirut, the parlous state of Lebanon’s economy prior to, and since the explosion, has left little room for trade to get worse.

The minimal impact on these statistics says less about the resilience of Beirut’s maritime operations in the face of adversity and more about the enduring nature of the economic collapse in Lebanon.

The World Bank estimates that Lebanon’s GDP plummeted from close to $55bn in 2018 to an estimated $33bn in 2020, while GDP per capita fell by around 40% in dollar terms.

In the wake of this economic meltdown that has left Lebanon effectively operating as a bankrupt state, the devastation inside Beirut’s port has registered as a mere blip in a long downward spiral.

And yet the blast, which was caused by a fire in a warehouse that Lebanese authorities admit held a vast stockpile of ammonium nitrate for six years, has left large sections of the port unable to operate.

Pier number 9, where the destroyed silos housing the ammonium nitrate once stood, remains a 145 m crater flanked by a sunken vessel at its seaward entrance and wrecked vessels blocking access to piers 10 and 11 at the other end.

The gantry system that once conveyed grain to the damaged silos at pier number 8 remains unrepaired and the damaged silos must be demolished after the authorities get around to disposing of the 50,000 tonnes of grain that is still rotting slowly in its charred bowels.

The lack of any grain storage means that the few bulk carriers left calling, largely on humanitarian grounds, must now discharge their grain cargoes directly into trucks. It is a slow and cumbersome process not helped by the fact that most of the mobile cranes and other cargo-handling equipment was damaged in the blast. As with most other assets inside the port they have not been repaired or replaced.

All warehouses in the port as well as in the Freezone were destroyed, which has left the port dealing with an acute lack of storage space available to process the limited trade that does arrive. At the container terminal the blast damage was less severe, however only four out of the 16 cranes are operational — a situation that has doubled waiting time for vessels, adding to longstanding inefficiencies at the port.

The destruction of the port’s administrative and customs offices in the explosion has meant that that most cargo-related data has effectively disappeared, resulting in major delays in clearing goods. Any new cargo that arrives simply adds to the backlog of logjams that are being left unattended to amid the political chaos.

Hundreds of containers damaged by the blast remain unmoved since in the past year. They sit in the yards, with container lines unable to dispose of them because the administrative snarl up stubbornly still show the boxes as being “FULL” in customs records.

The majority of maritime-related companies that were in Lebanon prior to the explosion have struggled to restart any meaningful operations as nearly all offices were adjacent to the port and most were either destroyed or severely damaged in the blast.

According to those still working inside the injured port, the spiralling problems reflect the wider problems within Lebanon’s political and economic collapse.

Creaky power plants are short on fuel and provide only a few hours of electricity each day. But longer blackouts and deeper shortages of basics goods beckon as the state struggles to finance basic imports.

In January, the World Bank argued that reforming Lebanon’s port sector was a prerequisite to rehabilitating the Lebanese economy, estimating the damage to the port to be in the realm of $350m.

Container group CMA CGM, controlled by the French-Lebanese Saade family, first pitched a plan to rebuild Beirut’s port within three years in August 2020. In November 2020, Hamburg Port Consulting and Roland Berger began a redevelopment study and a consortium including HPC and Colliers Germany also announced a $7.2bn investment proposal to rebuild the port and surrounding area earlier this year.

Political deadlock inside Lebanon’s fractious government, however, has prevented any substantive decisions being taken on the proposals which remain mired in bureaucracy.