Congestion-driven capacity constraints are driving freight rates, rather than demand

Global container volumes are growing only moderately when seen from a longer-term perspective. Only in the US are volumes increasing significantly on 2019 levels 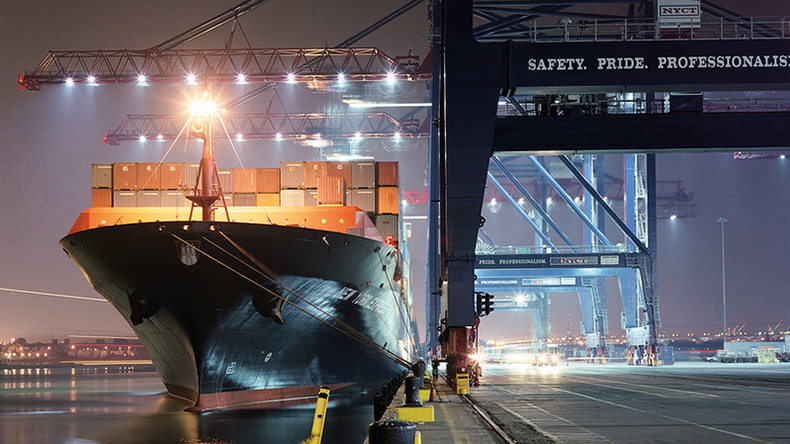 Source: Global Container Terminals Global demand growth over the past two years has been no more than would be expected.

US CONSUMERS are continuing to prop up container freight demand even as the rest of the world witnesses only moderate growth, according to the latest volume figures from Containers Trade Statistics.

Global volumes for June, the latest month for which figures are available, came in at 15.2m teu, bring the year-to-date figure to 88.7m teu.

But comparisons with 2020 give an exaggerated picture as they were based on the volume collapse witnessed during the first half of last year as the pandemic led to lockdowns around the world.

When compared with 2019 data, volumes are up just 6% in the first half of this year.

“We’ve been reporting for several months now how demand has surged on the two major trades to North America and Europe and the effect this has had on supply chains,” CTS said.

“This is certainly true when compared to the first half of 2020. But, compared with 2019, growth is not evenly spread.

“The star performer is the Asia to North America trade, up nearly 30%. The Asia to Europe trade is flat, up by just 0.7%.”

At a global level, volume growth over the past two years has averaged 3% per year, it added.

“Without the eastbound Asia to North America trade, it would have been a lot less,” CTS said.

Freight rates, however, had continued to strengthen as congestion in the supply chain led to capacity constraints.

“This sets another record high in our reporting of price indices which started in January 2009 and is a little more than double the level of last June,” CTS said.

“It says everything about continuing strains in supply chains especially on the major east-west trades.”

But the surge in freight rates could not be attributed solely to rising demand.

“With freight rates continuing to soar to new records highs on a weekly basis, it is only natural to make the implicit conclusion that one of the driving forces must be a substantial boom in demand,” said Sea-Intelligence chief executive Alan Murphy.

“When this is further compounded with headlines of gridlock in especially North America, the feeling of “boom” is only strengthened.

But this was only the case in North America, he added.

The US market had started to diverge from others in the second half of 2020.

“The narrative, which is often seen in describing the demand developments, is that consumers had switched consumption away from services and instead into goods,” Mr Murphy said.

“This is most certainly the case for the US consumers, as also seen in the macro economic data for the US.

“However, this narrative is clearly seen not to hold up in the case of Europe, where demand growth can at best be described at muted.”

Other regions had also witnessed relatively weak performance when compared with a 2019 baseline.

And while US imports were soaring, export volumes out of North America had fallen by 9% to 7.5m teu.

“All export trades from North America are down and the major backhauls to the Far East and to Europe are both down by around 10.5%,” CTS said.

Mr Murphy noted that while exports had roughly equalled imports in the pre-pandemic period but had now fallen to just 37%.

He argued that while some of this could be attributed to higher rates pushing out lower value export volumes, this did not explain it entirely.

“The US exporters have clearly seen a very sharp increase in rate levels in 2021, but this is also the case for the European backhaul shippers,” Mr Murphy said.

“The rate increase seen on the European backhaul trade has not only been slightly higher than for the US exporters, but it has also been happening for a longer period of time.”

If it were just rates that was driving volumes, then Europe should have seen an even sharper fall.

“A hypothesis might be that because the European exporters have already been through a cycle of such increases in 2017, they have adapted their business models to better be able to operate even in the case of higher freight rates, and hence been able to better weather the current storm,” he added.