A tanker seized by unidentified armed hijackers on Tuesday is now safe and headed towards the Oman coast, according to UK Maritime Trade Operations

Lloyd’s List Intelligence AIS tracking shows Asphalt Princess headed towards Oman after armed boarders who seized the Panama-flagged tanker on Tuesday evening left the vessel, which has been declared ‘safe’ by the UK military group 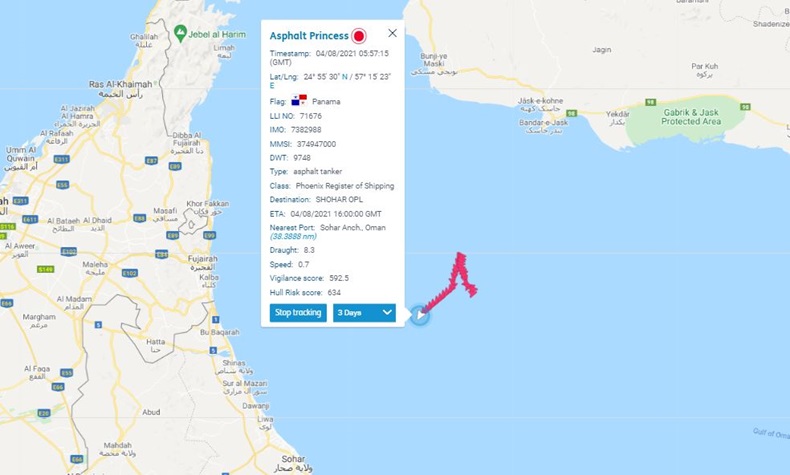 ARMED boarders who seized the Panama-flagged tanker Asphalt Princess yesterday have left the vessel, which is now headed back towards the Oman coast, according to Lloyd’s List Intelligence vessel tracking data.

A notice posted by the UK Maritime Trade Operations at 0600 hrs BST said the boarders have left the vessel, which is now “safe”. No further details were given.

It was not immediately clear who was responsible for the attempted hijack. However, Lloyd's List understands from sources directly involved in the incident that heavily armed, unauthorised persons boarded the vessel on Tuesday evening and directed it towards Iran.

Days after a fatal attack on a Zodiac-operated tanker, armed men seize an asphalt tanker off the Gulf of Oman and direct the vessel to Iran. UK and US naval operations are monitoring the situation. Iran has reportedly denied involvement

The UK and US navies were involved in monitoring the situation but have issued no details on the operation.

The 1976-built tanker is owned by Dubai-based Prime Tankers LLC, which had another tanker briefly seized by Iran’s Islamic Revolutionary Guard Corps in August, 2019 and accused of oil smuggling.

The company's website, which was operational prior to the latest attack, was unresponsive on Tuesday and nobody was immediately available for comment.

Iran’s Revolutionary Guards have denied that Iranian forces or allies were involved in action against any ship off the UAE coast, saying the incident was a pretext for “hostile action” against Tehran, according to Reuters citing state television reports.

The hijack came days after Iran was blamed for a fatal drone attack on the Zodiac Maritime-operated product tanker Mercer Street off Oman in which two people on board died.

Britain, the US, Romania and Israel have all blamed Iran for the July 29 attack, which has been characterised by government and private security analysts alike as a “serious escalation” in the so-called shadow war between Israel and Iran.

While Mercer Street (IMO: 9539585) is owned by Japanese company Taihei Kaiun Co, flagged by Liberia and operated by UK-based Zodiac Maritime, the tenuous link to Israel via Zodiac’s Israeli chairman Eyal Ofer was sufficient for US and Israeli security officials to conclude that Iran was targeting Israeli interests.

Iran has also denied any involvement in the Mercer Street attack, but warned it would respond promptly to any threat against its security.

The seizure of the Asphalt Princess is the 20th incident against commercial shipping involving 25 ships over the past 28 months, resulting in two confirmed deaths and a possible third.

Prime Shipping owned the Panama-flagged bunkering tanker Riah (IMO 8916455) which was boarded near Farsi Island and taken it to Bandar Bushehr for alleged oil smuggling in August, 2019. Nine of the 12 Indian crew members were released several weeks later.