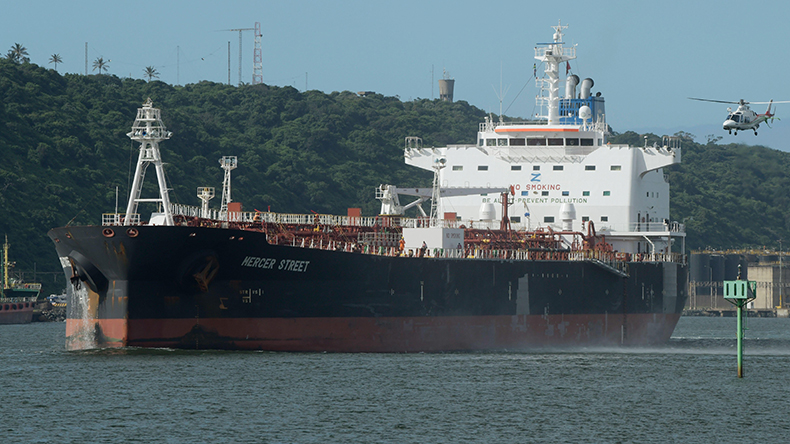 Source: Frank Kahts Durban / Alamy Stock Photo Mercer Street was travelling from Dar es Salaam to Fujairah with no cargo on board when it was attacked at 1800 UTC on July 29.

A DRONE attack is one of the possible causes behind an explosion on a product tanker which killed two people on board, according to officials.

Investigations have been opened into an apparent attack on the Liberia-flagged vessel off the coast of Oman on July 29.

The vessel — operated and managed by London-based Zodiac Maritime and owned by Japanese company Taihei Kaiun Co — was sailing under its own power with a US naval escort for an undisclosed safe location on July 30.

“With profound sadness, we understand the incident on board Mercer Street on July 29, 2021 has resulted in the deaths of two crew members on board: A Romanian and a UK national,” Zodiac said in a statement. “We are not aware of harm to any other personnel.

“Our primary concern remains the safety and wellbeing of everyone on board and all those affected by the situation. Details of the incident are still being established and an investigation into the incident is under way.

“We continue to work closely with the [UK Maritime Trade Operations] and other relevant authorities. We have no additional details to share at this time.”

Speculation about the cause of the explosion ranged from piracy to a terror attack.

One unidentified US official told the Associated Press that the attack appeared to have been carried out by a “one-way” drone and other drones took part.

“What we have here is a terrorist act by Iran,” the TV channel cited the unidentified official as saying. “The Romanian fatality was apparently the captain of the ship, and the Briton a security man. The Iranians struck the ship’s body using an unmanned aerial vehicle.”

Dryad Global, the maritime industry security analyst, said an unmanned aerial vehicle deployed flares for the first event reported by UKMTO. The subsequent second event, it reported, resulted in an explosion on the vessel, but the nature of the attack was unclear, the update added.

Ambrey Ltd, a UK-based maritime security company, confirmed that a team member was one of those killed in a “security incident”.

The vessel was travelling from Dar es Salaam to Fujairah with no cargo on board when it was attacked at 1800 UTC on July 29, Zodiac Maritime said.

The UK Maritime Trade Operations reported the attack, giving the location as 152 nautical miles northeast of Duqm, Oman. No other details were provided. The UKMTO also advised of another unspecified non-piracy event, shortly before this one.

The vessel, which last signalled its Automatic Identification System position at 1630 GMT on July 29, is entered with UK P&I club, which declined to comment.

In July, a containership recently sold by the Ofer family was attacked in the Indian Ocean.

In April, an Israel-owned ro-ro carrier was also attacked off Fujairah, while Israel was also accused of a mining an Iranian ship Saviz (IMO: 9167253).