The lowest water levels in 77 years have resulted in a state of emergency for the Parana river, the main waterway for grains exports in Argentina, according to reports

Ships reported to be allowed to carry about 75% of loads to avoid the risk of grounding. The restriction comes at a time when higher-than-average corn exports are anticipated A STATE of emergency imposed on the Parana river, the main waterway in Argentina that links to grain hubs, is hindering full cargo loads to be carried for fear of the risk of grounding, according to reports.

Cargoes are limited to about 75% of capacity, the head of the Chamber of Ports and Maritime Activities told Reuters. Should the situation continue, and it looks like it will, that figure could drop to 60%.

The restrictions come as water levels reached a 77-year low due to severe drought.

The US Department of Agriculture was forecasting corn exports to reach 37.4m tonnes in the 2021/22 marketing year, 1.4m tonnes above previous estimates, due to higher production and starting stocks.

Sorghum production was also projected higher — at 4.5m tonnes, almost the highest in a decade, in response to strong Chinese demand, it said. 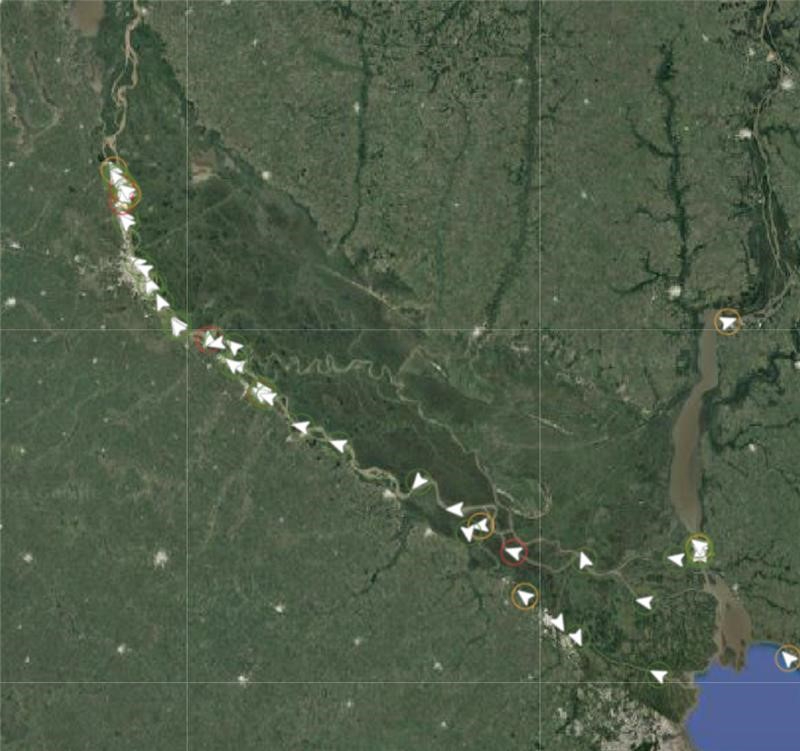 Bulkers over 10,000 dwt in the Parana river Lloyd's List Intelligence

The Food and Agricultural Organization pegged corn production at a record 59m tonnes, leading to higher-than-average exports. Harvesting was completed in May.

“The bumper output is due to above‑average yields and the record planted area, reflecting remunerative prices and strong demand for exports,” it said, adding that the weak national currency boosted the competitiveness of domestic corn on the international market.

Sorghum output, which was also harvested in the second quarter of the year, was above the five-year average, it added, boding well for export volumes.

Danish grains consultancy BullPositions said the situation this year was reminiscent of last year, when water levels were at multi-year lows.

Corn is likely to be the only grain crop to feel any effects from the lack of water and navigational restrictions, its managing director Jesper Buhl said, given this is the peak exporting season.

“The influence on bulk shipments is most likely to be on single vessel movements and less likely to have a material impact on overall volumes,” he added.

A local ship agent told Lloyd’s List that vessels were loading 30-35% less cargo from upriver terminals due to the low water levels, with corn volumes needing to be moved on more vessels as a result.

The vessels can opt to complete the loading at Necochea or Bahia Blanca or proceed directly to their destinations, depending on the contract, the agent said.