WHO pushes for seafarers to be a priority for vaccines

Preliminary results of an International Chamber of Shipping survey suggest more than 10% of seafarers are now vaccinated, with port vaccination programmes being increased in Europe and North America

The World Health Organization has recommended seafarers get priority for vaccinations, in a change to guidance for transport workers. With rollouts gaining pace, the industry may soon start to demand more travel rights for vaccinated crews 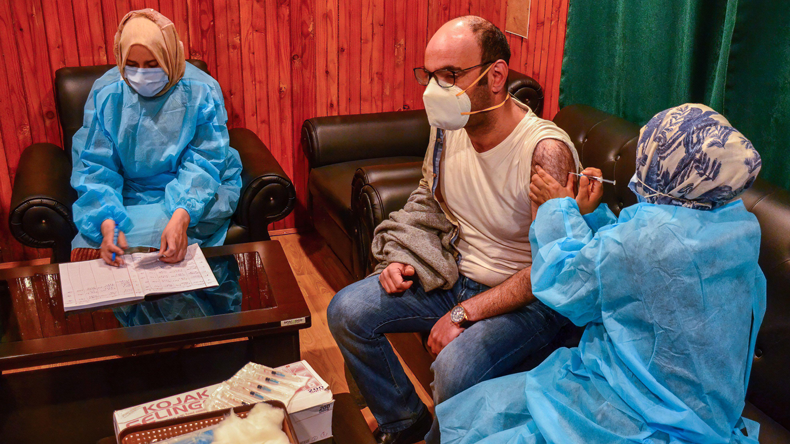 THE World Health Organization has recommended seafarers be among transport workers given priority for vaccines if supplies are low.

The UN body has updated its vaccine roadmap guidance for governments, with special mention for seafarers stranded at sea by the crewing crisis.

“I am glad to see that the WHO recognises the importance of vaccinating seafarers on cargo ships,” said International Maritime Organization secretary-general Kitack Lim. “Seafarers will play a key role in the global recovery, and barriers to international travel and crew change must be removed.”

But the move alone will not mean more jabs in seafarers’ arms.

Seafaring in 2050 will be a nightmare, unless…

Forecasting the role of the seafarer in 2050 follows similar predictions for the evolution of world trade and the development of shipping to carry that trade. A new study reveals tension at the heart of that forecast

“They’ve been bumped up the priority list in the WHO, which is great, but they still need to get the vaccines to the COVAX [vaccine sharing] programme in order to have them,” said International Chamber of Shipping secretary-general Guy Platten. “It is of course welcome to see, because it does give it some priority — there’s no doubt about that. But what we really do need to see is vaccines in arms.”

He said early results of an ICS survey suggested more than 10% of seafarers have been vaccinated, but the final figure could be higher.

He welcomed the “brilliant” news that Belgium will vaccinate seafarers of any nationality from July 26. Medical teams will vaccinate crews with the one-shot Johnson & Johnson jab on board ships at the ports of Antwerp, Ghent and Zeebrugge.

But Mr Platten added that many seafarers would still be unable to get jabs, and cross-border travel was no easier for those that could. “Even with the vaccines it doesn’t seem to make the blindest bit of difference to how you can travel, sadly,” he said.

International Maritime Employers’ Council chief executive Francesco Gargiulo said the WHO move would make little difference as it would not compel reticent countries to change their approach.

But with seafarer vaccinations picking up across Europe, North America and India, “we may be able to start pushing for these vaccines to count for something when it comes to facilitating travel”.

Mr Gargiulo said employers had so far refrained from asking for privileged travel access for the vaccinated, since so few seafarers were jabbed. There were also worries vaccine passports could be another barrier for the unvaccinated.

But making travel easier for vaccinated crew could help lessen hesitancy as seafarers realised they needed the jab to work.

“It is a very fine balance to strike, however, and with the crew shortages brought about by the pandemic we need to be very careful as the industry cannot afford to exclude even more people from an already undersupplied market,” Mr Gargiulo said.

“The shutdown of the cruise sector had masked this issue so far, but now that they are starting to come back online the pinch will be felt on the cargo sector as people that had temporarily migrated will start to go back, leaving gaps.

“If you then add the massive challenge that the pandemic brought to training and creating new officers, then you will have a perfect storm.

Mr Gargiulo said the IMEC, which has set up industry-funded quarantine-style hotels to help crew changes in the Philippines, is considering setting up in Jakarta as the Delta variant wreaks havoc in Indonesia.

Port operations in Shanghai and Ningbo disrupted by typhoon

Seafarer training for the future begins with attitudes and competencies