AP Moller-Maersk chief executive Søren Skou says he supports the phased-in approach of the EU emissions trading system. However, other shipping groups repeated their warning that extending the grasp of EU law far beyond Europe would impede efforts to set global regulations 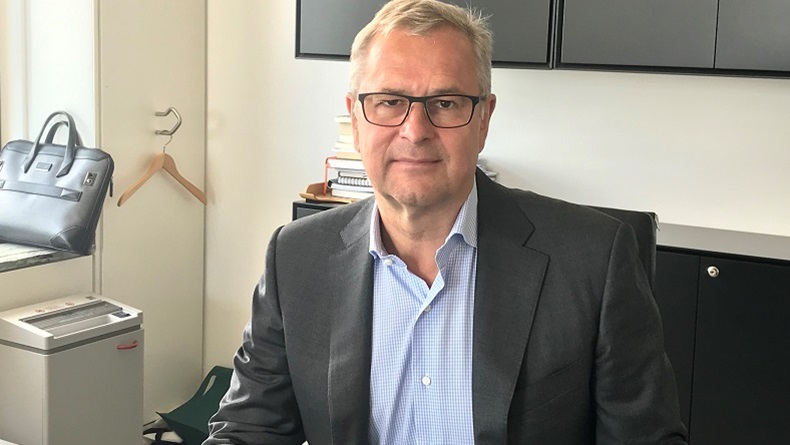 Source: Janet Porter Skou: “Only focusing on the CO2 coming out of the stack of the ship is no longer a credible or scientific path.”

THE European Union has chosen “the right approach” with its package of proposed environment regulations, according to Maersk chief executive Søren Skou.

Proposals published on July 14 include shipping in the bloc’s Emissions Trading System and forcing ships to meet increasing emissions intensity targets to encourage the transition to greener fuels.

He said a carbon market could and should help cover part of the competitive gap of new renewable fuels instead of subsidising existing technology.

“Other than as an ideological revenue raising exercise, which will greatly upset the EU’s trading partners, it’s difficult to see what extending the EU ETS to shipping will achieve towards reducing CO2,” said ICS secretary-general Guy Platten.

He said it was unfair for non-EU shipping companies to pay for “EU economic recovery plans” and accused the bloc of showing “political expediency” rather than leadership.

Mr Skou said the EU measures could show the IMO that significant emissions cuts were possible and would not lead to major price rises for consumers.

He said the bloc should start by applying its rules internally and expand their scope if the IMO does not deliver a strong global regulation by 2025.

This would ensure “that EU member states still have a strong voice at IMO based on facts and not politics”.

But he said the rules “should also be seen as the European Commission’s push to ensure that the EU does not miss out on the green energy revolution”.

The European Community Shipowners’ Associations warned that some of the proposals lacked consistency and shipowners needed enough time to spot potential flaws.

It said the funds should go to decarbonisation, not EU state budgets. A dedicated fund should be set up under the EU ETS to stabilise the carbon price for small and medium-sized shipowners.

“Incentivising the uptake of biofuel blends purchased outside the EU could create an enforcement minefield putting at risk the achievement of emissions reductions,” said association secretary-general Martin Dorsman. “While it is of utmost importance that flexibility is safeguarded, the introduction of double counting or double requirements must be avoided.

“Τhe principal obligation for compliance with any new standards should rest with the EU fuel suppliers.”

“Now lawmakers need to defend a carbon market that covers extra-European voyages, so that the biggest shipping companies are not let off the hook,” he said, adding that revenues should be reinvested in deploying zero-emission vessels, port charging, and hydrogen refuelling infrastructure.

But he warned that the EU’s FuelEU proposal was “recklessly pushing the industry to invest in liquefied natural gas ships that will lock us into decades of further pollution and stranded assets” and governments and MEPs should promote renewable hydrogen and ammonia instead.

A leaked draft of the EU’s multi-pronged plan to force shipping towards greener fuel choices confirms the worst fears of industry and green NGOs alike — namely that the rules will create a compliance minefield, cost billions of euros and ultimately push shipowners towards fuel choices that will lock fossil fuels into the supply chain for decades

The World Shipping Council said it would review the proposals in detail.

It welcomed their “genuine effort” but was concerned that applying EU regulations to voyages far beyond Europe would present “significant challenges” to global regulations.

UK Chamber of Shipping chief executive Bob Sanguinetti said: “We have seen how regional measures can distort the market and we encourage our EU partners to work collaboratively with the industry taking these proposals to the IMO to accelerate the decarbonisation journey.”

On the ETS, the European Association for Forwarding, Transport, Logistics and Customs Services (Clecat) director-general Nicolette van der Jagt said she had hoped for a more ambitious carbon market scheme covering all incoming and outgoing voyages from the EU.

Ms van der Jagt said the revision to the Energy Tax Directive would significantly increase the cost of logistics. She said hiking the price of fossil fuels without available alternatives would not ensure a switch greener fuels, and incentives for these were needed.

It said the tax directive needed to ensure better harmonisation among EU states to safeguard the single market.

The German Shipowners’ Association (VDR) welcomed the arrival of concrete proposals, though it too would have preferred a global fuel tax.

It said the financial burden would be “quite severe”, comparable to that of the IMO 2020 sulphur cap, and urged the EU to make its regional ETS scalable to work with any oncoming IMO regulation.

“Instead of a volatile Emissions Trading System, which would entail significant administrative burdens for smaller shipping companies to participate in, we would prefer a fixed charge per tonne of fuel, as this would ensure a much-needed price stability and thereby enable companies to plan ahead,” said VDR president Alfred Hartmann.

It backed the polluter-pays principle: “Whoever buys the fuel and determines the speed and course of the ship should logically also be the one primarily responsible for reducing its CO2 emissions and pay any related climate surcharge.”

“That would be like having to check the quality of the fuel at the petrol station before filling up your car,” he said.

Mr Hartmann said his group was ready to work with EU lawmakers and others on the details of how to align climate protection with the realities of shipping.

Maritime leaders unite to cut emissions in US and Canada