As the world’s third-largest economy, Japan is taking the lead in embracing ammonia in its energy transition. This is feeding an expectation that more tankers will either need to be diverted or built to ship ammonia over new east-west trades

‘If all of today’s long-haul shipping is converted to use ammonia as fuel, it will consume about 500m-600m tonnes of ammonia per year,’ says Statkraft vice-president 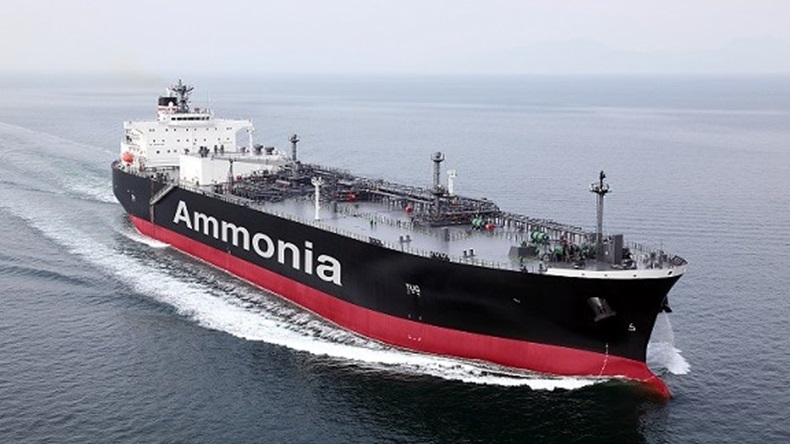 JAPAN’S move to embrace blue and green ammonia to decarbonise its marine and power sectors has stoked expectations that hundreds of tankers could eventually be built either to burn or ferry the fuel over longer-haul trades.

The world’s third-largest economy targets to import 3m tonnes of ammonia annually by 2030 mainly to replace coal used to fire up power plants.

Japan has embarked on joint projects with Saudi Arabia and Australia to either pilot transport or production of blue and green ammonia.

Drewry, the shipping intelligence provider, views the Persian Gulf as a potential exporter of blue ammonia, or fossil fuel-derived ammonia with carbon offsets in place.

Ammonia is gaining traction as one of the most viable zero-carbon fuels for international shipping. Even so, the transition appears insurmountable: the technology is unproven, fuel availability is uncertain, and trillions of dollars need to be invested just to get to the commercial starting line

NYK, the shipping group, has embarked on research and development of an ammonia-fuelled tug and a tanker that transports and runs on ammonia.

Japan’s Mitsui OSK Lines has likewise expressed an intent to build an ammonia-fuelled vessel for deployment before 2030.

If all these ideas go according to plan, the market for ammonia will expand significantly in the 2030s.

The partners have outlined a plan to export blue ammonia out of Pilbara in Australia.

Their partnership, however, also calls on wider collaboration in the supply chain for blue and green ammonia for zero-emission power generation in Japan.

Yara has separately tied up with Oslo-based renewable energy provider Statkraft and engineering group Aker Horizons to electrify an existing plant in Porsgrunn to pump out green ammonia.

Japan, the world’s top LNG importing country, regards blue and green ammonia as one potential fuel to decarbonise its economy

Yara “is working on a certification mechanism to facilitate green ammonia production in Norway to meet demand in Japan and other distant markets,” a spokeswoman told Lloyd’s List. She said the Porsgrunn initiative at present has no links with the planned exports to Japan.

“If all of today’s long-haul shipping is converted to use ammonia as fuel, it will consume about 500m-600m tonnes of ammonia per year,” said Ulf Eriksen, vice-president of Statkraft AS, the renewable energy provider. “That is three to four times as much as today’s global ammonia production.”

Yara, as a leading ammonia player with shipping exposure, is studying the possibility of retrofitting engines on its near dozen-strong operating fleet to run on ammonia.

Other shipowners have looked at cashing in on ammonia demand by repurposing tankers now trading liquefied petroleum gas.

Drewry estimates about 430 LPG carriers can transport ammonia, but just 50 of these are large and very large gas carriers.

“Given the higher tonne-mile demand to be generated, we expect more larger vessels capable of burning and carrying LPG and ammonia will be built,” Mr Sud said.

Mitsui OSK Lines has acquired one 35,000 cu m LPG carrier, which was renamed Green Pioneer (IMO:9471018) for its first time charter in years in the ammonia shipping space.

Norway’s Avance Gas chose to invest in two newbuilding dual-fuel VLGCs, which can be modified to run on ammonia.

Demand for such carriers, however, hinges on how far ammonia can gain traction in the power and marine sectors.

Mr Sud notes that Japan is still experimenting on co-firing ammonia with coal for power generation.

“The project will go on until 2023. Data gathered will go towards checking the feasibility of how much ammonia can be co-fired.”

Mr Bhushan said that with very few exceptions, ammonia will largely be carried on board MGCs and LGCs in the foreseeable future.

The application of ammonia as a marine fuel on the other hand, still needs to clear some hurdles.

Panagiotis Mitrou of Lloyd’s Register said that retrofitting existing engines and fuel systems to run on ammonia “will be demanding”. Ammonia is a toxic and corrosive gas and this would call for “different materials and arrangements” for onboard storage tanks.

In some instances, however, fuel tanks for LPG or liquefied natural gas-powered ships “can be compatible” with ammonia.

But ships would need to consume larger volumes of ammonia compared with LPG and LNG to go the same distances, given that ammonia has a lower energy density.

Ammonia’s relevance as a zero-carbon marine fuel also hinges on the cost efficiency of producing the fuel from renewables.

Mr Mitrou  said competitively priced zero-carbon or green ammonia may well be available only from 2040 and beyond.

He also raised the possibility if Japan were to “introduce ammonia to larger-scale use” also in the power sector, this may compromise the allocation of production capacity for shipping.