My View
Tags:
Political and Trade Ports and Logistics From the News Desk

The lessons and the aftermath of the Ever Given incident

Your weekly round-up of top stories from the Lloyd’s List news desk, plus our half-year outlook

Suez Canal Authority speaks out on Ever Given grounding, and what the rest of 2021 holds for the shipping industry 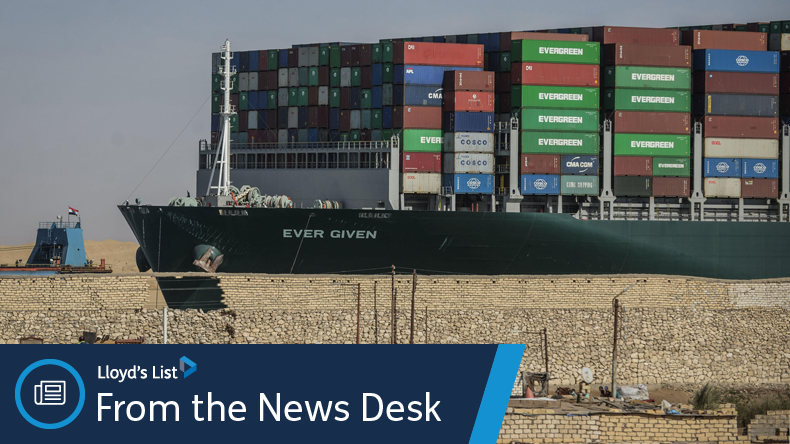 Source: Alamy Stock Photo The Suez Canal Authority has given clearance to the containership Ever Given to leave the canal.

THE Ever Given was finally cleared to leave the Suez Canal this week after four months, to sighs of relief from across the maritime and insurance industries.

The various parties thanked the master and crew, and pointedly the Suez Canal Authority, for releasing the ship after a drawn-out battle over how much Egypt should be compensated for its grounding in March.

Much has been written here already about how and why the ship got stuck (Speed? The master? The pilot? Bad weather?) and, of course, the full facts are not yet known.

But with the ship and its cargo held as a bargaining chip in the compensation talks, it was clear who had the power throughout.

The Lloyd’s List View: The SCA must ensure there will be no repeat of these Texas Hold’em tactics if something like this ever happens again.

Meanwhile, our Half-Year Outlook has the essential insights on where shipping’s major segments are heading.

Our latest Special Report has all the market intelligence from the booming boxships to bullish bulkers, and even modest optimism for the moribund tanker market.

We also look at liquefied natural gas and liquefied petroleum gas, ship leasing, why the second half of 2021 will be crucial to decarbonisation, and why marine insurance will get more expensive still.

But in a sober warning of potential hangovers to come, the report adds: “The fact that the current upturn has hit after a period of low orders in most sectors is more luck than judgment on the part of an industry with a pathological tendency toward self-harm.”

Listen Out: Kuehne + Nagel head of sea logistics Otto Schacht, who has had a front-row seat every major market move for the past 40 years, tells the podcast why container shipping will never be the same.

Don’t miss: Chief correspondent Richard Clayton on how vaccines and versatility are overcoming the crew-change crisis.

Advertisement
Tags:
Political and Trade Ports and Logistics From the News Desk