To maintain confidence of the world’s shipping industry, Egypt must prove itself a reasonable interlocutor 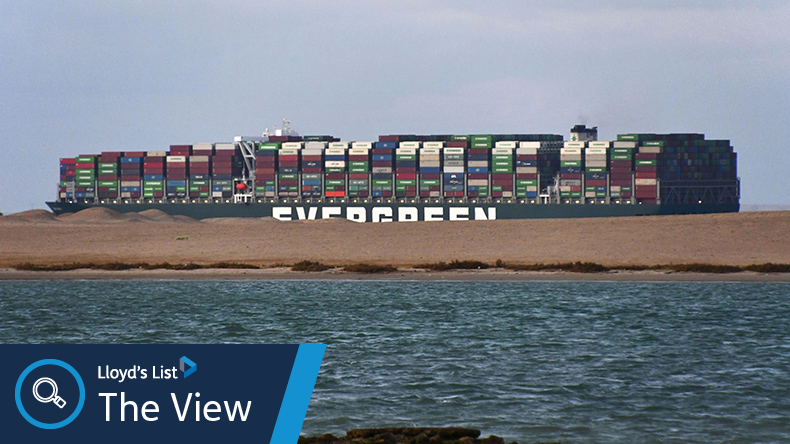 Source: Newscom / Alamy Stock Photo It must be hoped that insurers did not pay more than they justly should simply to secure Ever Given’s release.

THE normal transit time for a fully laden boxship sailing from southeast Asia to Rotterdam is around a month. For Ever Given, that trip will take it nearly four.

The news that the most famous vessel on the planet right now has finally been allowed to resume its long-disrupted voyage does need to be welcomed.

But, equally, the question of how and why it took so long for this to happen does need to be asked.

From a technical viewpoint, the ship’s classification society ABS declared it fit to sail in mid-April.

The Ever Given’s master was solely responsible for the decisions and actions that led to the blockage of the Suez Canal, but the protracted three-month negotiation, which saw Egypt detain the vessel and its crew until an estimated $550m settlement was paid, was ‘amicable’ and ‘everyone left happy’, says Admiral Rabie

But from then until yesterday, Ever Given remained at anchor in the Great Bitter Lake, as insurers haggled with the Suez Canal Authority over the latter’s inflated compensation demand, initially pitched north of the $900m mark.

That was clearly what professional negotiators call highballing. Asking for more than you would be willing to settle for is negotiation tactics 101.

Nor can it be gainsaid that the Suez Canal Authority had a legitimate bill to present. It did engage in initial salvage efforts, there was physical damage to the canal, and six days’ revenue was lost, although some of that will have been made up subsequently.

But totting it all up, and assuming there are no factors which remain unknown to the public, because we still have no sight of any accident investigation report, this is nothing that $150m or thereabouts should not have settled promptly.

Suez Canal Authority chairman Osama Rabie has described the protracted three-month negotiations as amicable and based on mutual respect with strategic partners.

That seems to jar somewhat with the tone of legal statements in the run up to the eventual agreement, but statements from the vessel’s owners, a regular customer of the canal that want to continue using the route rather highlights who had the upper hand here.

The Suez Canal Authority probably felt it had been dealt the equivalent of at least a full house, with the ability to hang on to Ever Given and its cargo giving it a winning hand in the talks.

Deal reached on Ever Given, says UK P&I Club

Its determination to sweeten the pot may have been bolstered by confidence that local courts would find in its favour, as they repeatedly did when the owners brought legal action seeking Ever Given’s release.

Had better counsel not prevailed, there was a real risk that matters would have years to resolve, with interminable litigation grinding its way up through the Egyptian court system to the benefit of none but the fee-earners at the law firms involved.

Details of the talks between the insurers and the Suez Canal Authority — not to mention the level of the settlement — remain confidential, given the sensitivities involved, and the non-disclosure agreements signed by all parties.

But we also still do not know much of the detail of the accident itself because of the absence of a publicly available accident investigation report.

It must be hoped, for the sake of avoiding precedent, that the insurers did not pay more than they justly should have done simply to secure the vessel’s release.

Meanwhile, the Suez Canal Authority should give assurances that there will be no repeat of these Texas hold ’em tactics if something like this ever happens again.

If it is to maintain the confidence of the world’s shipping industry, Egypt must show itself a reasonable interlocutor.

The full and transparent publication of accident investigation reports from all sides would also go some way to putting to rest any remaining concerns about how this incident occurred in the first place.

Master of bulker abandoned off Egypt allowed to leave

Ever Given begins exiting Suez Canal after compensation deal