In total, 134 vessels over 10,000 dwt scrapped in the first half of the year, up 15% on the same period last year, Lloyd’s List Intelligence data shows 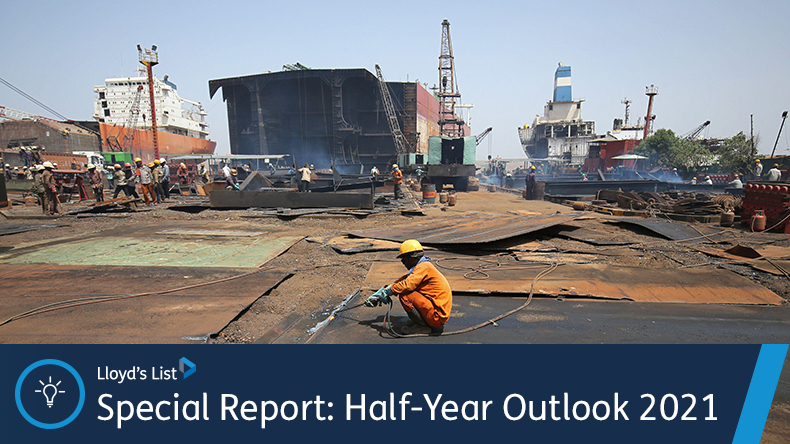 SCRAPPING rates surged to the highest point since 2008 this week, as high steel plate prices saw recycling yards across the Indian subcontinent compete for tonnage amid government-imposed lockdowns.

Pakistani buyers will pay as much as $580 per light displacement tonne for containerships, with the $600 per ldt mark soon to be breached for all tonnage types in such a firm market, according to cash buyer GMS.

Prices are nearly double the same period a year ago and already up 40% for tankers and 24% for bulk carriers, according to Baltic Exchange data.

“Far from the traditionally expected slowdown during the monsoon and summer months, sub-continent recycling markets fired on at pace once again… and a slowdown in the supply of tonnage of late is likely contributing to some overly aggressive offerings from hungry end-buyers,” GMS said in its report this week.

Prices paid for recycling were last seen at this level in September 2008, just before the global financial crisis, in a year when record-breaking charter rates regularly topped six figures for bulk carriers and tankers, deterring owners from scrapping their vessels.

Recycling prices for tankers scrapped at subcontinental yards peaked at $753.33 per ldt in late August that year, according to historical Baltic Exchange data, but quickly plunged to average $323 per ldt in 2009.

Data for this year show that tankers accounted for 43% of all tonnage scrapped in the first half of 2021 measured by deadweight. This reflected not only moribund chartering rates but the closing gap between secondhand prices paid for elderly tonnage and rising steel plate values for scrapped ships.

For the comparable period in 2020, tankers accounted for just 17% of tonnage over 10,000 dwt that was scrapped, as higher rates and strong demand for floating storage kept earnings profitable.

EM Vitality would have fetched about $17.7m based on current figures.

Predictably there were few containerships demolished so far this year. Six vessels with a combined teu of 7,203 and average age of 29 years were scrapped, reflecting sky-high, short-term charter rates, even for the oldest of vessels.

In all, 48 bulk carriers and ore carriers were scrapped in the first half of the year, totalling 5.5m dwt, and accounting for just under half of all tonnage scrapped by deadweight.

However, the pace of bulk carrier scrapping slowed dramatically during the second quarter of the year, accounting for just 1.4m dwt of the half-year total for that type.

Spot rates for the global bulk carrier fleet unexpectedly gained during that period on the back of rising commodities prices and booming Chinese demand for iron ore, a steel-making ingredient that it imports from Brazil and Australia on capesize vessels.

“Not since the heady days of 2008 have we seen such consistently firm levels on scrap prices, and it will be interesting to see how much longer this trend persists, with many analysts predicting that this ongoing ‘super-cycle’ maybe set to end at some point before the end of the year and that could eventually turn tumultuous at that time, for shipowners and cash buyers alike,” the GMS report said.

Tankers and offshore units made up most of the limited supply of tonnage for sale now, it said, citing impressive rates for containerships and bulk carriers that have deterred scrapping.

Beaching and essential port operations, as well as bank operations for letter-of-credit releases are expected to keep many subcontinental yards open even as government-imposed lockdowns restrict business and commercial activity, the report said.

This article is part of Lloyd’s List’s ‘Half-year outlook 2021’, which can be viewed in full here. Subscribers can also access a downloadable PDF of this report by clicking here.