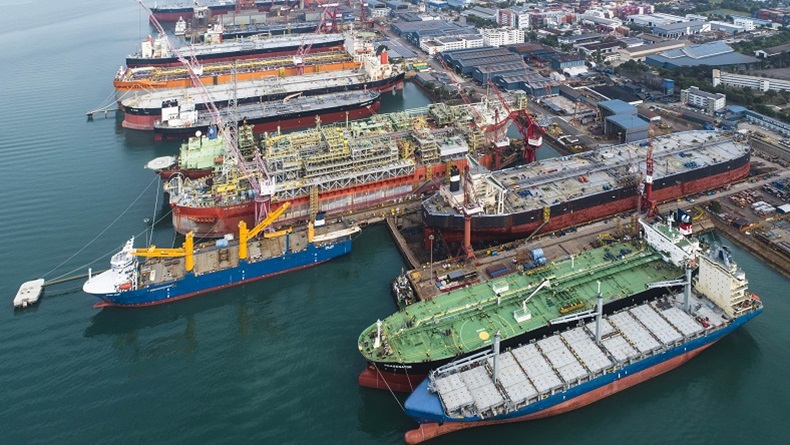 The Keppel O&M yard at Tuas: Keppel and Sembmarine have emphasised that they are still in preliminary negotiations.

KEPPEL Corporation and Sembcorp Marine have entered into a non-binding agreement and kicked off exclusive negotiations over the long-speculated merger of their yard operations.

The objective of these negotiations is to create a stronger combined entity and sustainable value over the long term for Keppel Offshore & Marine and Sembcorp Marine and their stakeholders, a joint statement said.

The deal called on both yard groups to form a combined entity that will in turn enter into a strategic partnership with Keppel Corp, the now parent group of Keppel O&M.

It is envisaged that the combined entity will be publicly listed and the shares will be held by Sembmarine’s shareholders and Keppel Corp.

However, the two groups emphasised that they are still in preliminary negotiations and any proposed merger remains subject to due diligence and approval of their shareholders.

They have also pledged to engage unions in mapping out future plans for yard workers, continue to train and create higher value-adding jobs for their workforce.

These developments have come after years of speculation over renewed merger talks between the two groups following the collapse of oil prices that stoked a protracted offshore downturn since 2014.

The oil market was hit by coronavirus pandemic-led demand disruption, which triggered a row between Saudi Arabia and Russia that led to record falls in oil prices.

That damaged hopes then of a recovery in the offshore sector, which still answers for a sizeable chunk of Keppel O&M’s  and Sembmarine’s orderbooks.

Elsewhere in China and South Korea, mergers and acquisitions have already picked up between yard groups.

However, the merger between Singapore’s two largest yard operators, which was first debated publicly in the early noughties, was stunted by legacy issues.

Keppel said it has signed a non-binding agreement with a Temasek Holdings-owned entity, Kyanite Investment, calling for the rigs to be sold to a separate asset holding company.

The second issue pertained to anti-corruption probes over Keppel O&M’s  and Sembmarine’s contracts with Petrobras.

The situation in Brazil seemed to have quietened down three years on from Keppel O&M’s announced $422m settlement with authorities.

Observers suggested that Sembmarine by comparison, stands a better chance as emerging unscathed given that the years-long probes believed to be motivated by opposition to former Brazilian president Dilma Rousseff could have run their course.

Keppel O&M and Sembmarine have separately ventured into the renewables sector.

The joint statement said the potential merger would combine “complementary strengths of both businesses” to accelerate the transformation and pivot towards renewables and clean energy sectors.

Sembmarine gets contract for ‘most remote’ UK offshore wind platform

Keppel Corp chairman to stand down

Keppel O&M restructures to exit rigs and focus on renewables