The frosty relationship between China and Australia has already affected trade in commodities such as coal, barley and cotton but Beijing will find it more difficult to find alternative suppliers of iron ore. Meanwhile, Lloyd’s List crunches the numbers on the boxship pile-up around China’s southern ports 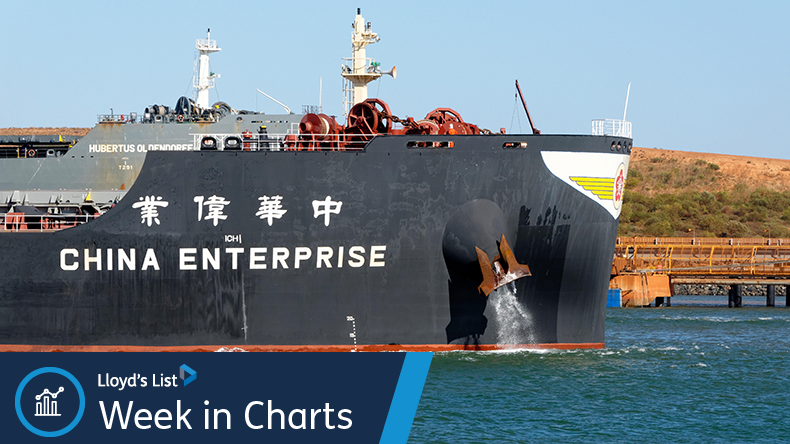 Source: Paul Mayall Australia / Alamy Stock Photo Iron ore carriers will still be entering Australian ports for a while yet.

CHINA accounts for more than 70% of global iron ore trade and two thirds of its imports currently come from Australia.

However, the frosty relationship between Beijing and Canberra, which has affected bilateral trade for commodities such as coal, barley and cotton, now threatens to disrupt the iron ore trade, with Chinese importers hesitant to enter new long-term contracts with Australian miners.

As things stand, though, China will still need to turn to Australian miners to meet demand even if it has bought every shovelful of iron ore dug up elsewhere, Lloyd’s List analysis shows.

Although the world is short on an inventory cushion when it comes to iron ore, geopolitics is sure to reshape supply chains and redraw one of the major trading lanes for bulk carriers, thereby significantly impacting trade flows in the coming years.

At present, China has no choice but to grit its teeth and keep buying Australian iron ore, even as bilateral ties continue to fray.

In normal times, shifts in containership deployment act as an intermediate layer between global demand and supply dynamics and the employment and earnings performance of individual segments of the fleet, explains Daniel Richards, associate director at Maritime Strategies International, in his analysis article for Lloyd’s List.

Bottlenecks in the containership cascade, such as occurred in 2015-2016, can lead to adverse market conditions for particular fleet segments. Conversely, the ‘uncorking’ of these bottlenecks can reverse these shifts in the relative fortunes of different asset classes.

Following the developments of the past year, the industry faces a peculiar dynamic with respect to the cascade and deployment trends: The ongoing market chaos and the inefficiency-driven under-supply of tonnage reduces the importance of deployment trends in the near-term, while the recent surge in container newbuilding contracting will make the operation of the containership cascade a factor of renewed and enhanced performance in several years’ time.

And in both cases, the transpacific trade is the main actor.

For more, follow this link to the full article.

Finally, the number of sailings being blanked due to the congestion in southern China’s major ports has shot up as the number of ships at anchor awaiting berths remains high.

Figures from Lloyd’s List Intelligence show 90 boxships comprising 484,208 teu in the anchorages nearby Hong Kong as the disruption at Yantian spreads to the nearby hubs Nansha and Shekou. The number has fallen from its peak of 104 ships comprising 611,966 teu on June 14.

Some 26% of the anchored tonnage lists Hong Kong as its next destination.

For the full picture and additional data, see our infographic.