With Yantian only slowly coming back to operation, carriers are still diverting vessels away from southern China. But a significant number of ships still remain at anchor 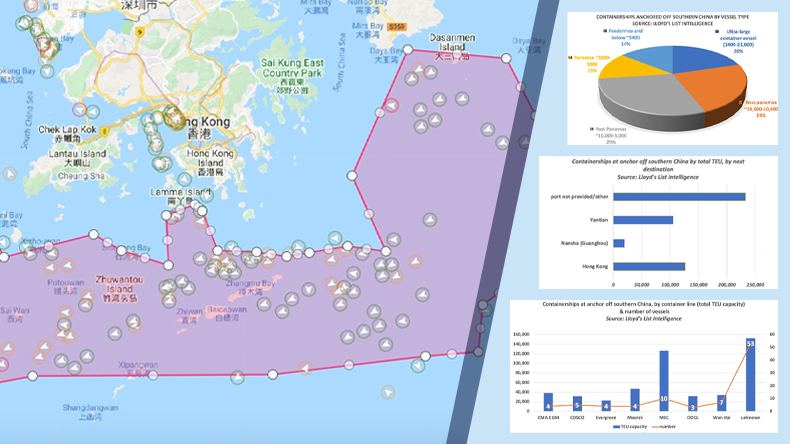 THE number of sailings being blanked due to the congestion in southern China’s major ports has shot up as the number of ships at anchor awaiting berths remains high.

Figures from Lloyd’s List Intelligence show 90 boxships comprising 484,208 teu in the anchorages nearby Hong Kong as the disruption at Yantian spreads to the nearby hubs Nansha and Shekou.

Part of the reason for the decline is vessels now being instructed to omit the ports altogether.

Figures from project44 show that 298 containerships with a combined capacity of over 3m teu that were due at Yantian between June 1-15 had skipped the port, representing a 300% increase in the usual number of blankings in a month.

“Though the total capacity was not meant for Yantian International Container Terminal, the volume of loaded export containers that were left behind has caused a severe backlog and is due to create major delays and disruptions in global supply chains shortly after the Suez Canal incident,” project44 said.

The number of scheduled blank sailings announced by major carriers remains elevated through to next week, before tailing off, but that assumes Chinese authorities are able to contain the virus, and allow carriers to return to normal operations.

“Even in this best-case scenario, it could take weeks to process backlogged containers, and shippers should expect serious delays,” project44 said.

Container dwell times at the port also remain elevated, with the seven-day average of median dwell times for export containers doubling to over 23 days.

“While the epicentre of this particular breakdown is YICT, these numbers spell trouble across the maritime shipping world, and particularly for companies that rely on these routes,” said project44 vice-president Josh Brazil.

“Even shipments not directly impacted by the Yantian situation could feel the impact, as carriers adjust their networks to avoid congestion at YICT.”

Lloyd’s List Intelligence figures show that congestion has already spread to Nansha, and that many of the ships at anchor now have Hong Kong as their next destination.