The seafarers, mostly from India, went on hunger strike earlier this year because their pleas for owed wages, repatriation, and provisions had been dragging on 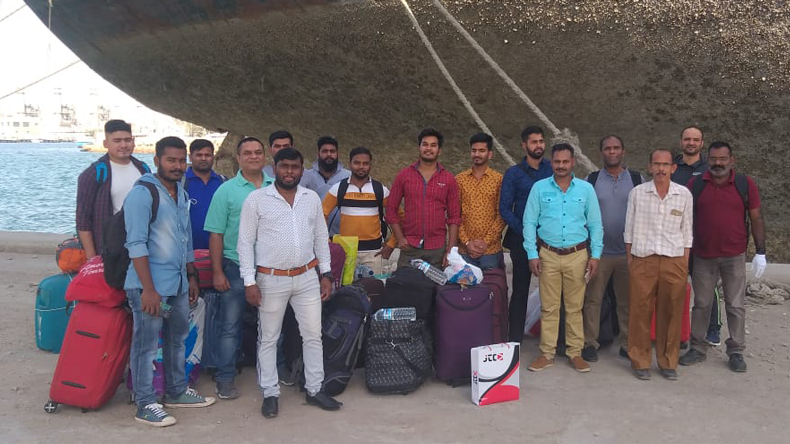 The crew on their way home.

THE abandoned crew of the Qatari-owned bulker Ula (IMO: 8102414) have been allowed to return home following their two-year ordeal.

The International Transport Workers’ Federation union had been fighting for the rights of 19 mainly Indian crew who were left abandoned first off Iran’s coast and then in Kuwaiti waters when the vessel’s owner stopped paying their wages and ceased providing basic necessities such as food, water, and fuel.

The 39-year-old 37,227 dwt vessel, which was flagged with Palau at the time of the abandonment, was carrying a cargo of clinker. It originally had 25 seafarers on board. Some crew fell ill and at times there was only enough food for one meal per day, the ITF said in a statement.

Frustrated with the lack of progress on the case, six crew members disembarked and flew home without wages in October 2020. Earlier this year, the remaining crew went on hunger strike in an attempt to draw attention to their plight.

Abandonment cases reached a record last year at 85, more than double the number in 2019, according to the International Maritime Organization and International Labour Organization, which run a joint database. The cases involved hundreds of seafarers.

Under the Maritime Labour Convention, a flag state has “clear obligations to ensure that the crew are repatriated at the conclusion of their contracts, and should step in to do this itself if the shipowner fails to do so”, the ITF said.

In this case, the ITF “repeatedly raised the lack of provisions and wages owing, but no action was taken”, said the union's Arab co-ordinator Mohamed Arrachedi. “Palau was nowhere to be seen.”

A spokesperson for the Palau International Ship Register said that it “took its responsibilities seriously, and worked within a legal framework to resolve the issue for the crew”.

PISC was in constant communication “with both sides, writing or staying in contact via the telephone, to find solutions”.

The IMO held seven video conferences between July and October 2020 with representatives from the ITF and the Palau government, according to PISR.

At a meeting in early September 2020, it was agreed that Palau should “issue a certificate of deletion and declare the ship stateless” to allow Kuwait, as port state, to intervene, it said, adding that it ceased to be involved in subsequent meetings “at the request of those taking part in the calls as it no longer had any jurisdiction over the vessel”.

While the seafarers have now been repatriated with help from the Indian government, the case is not over as legal proceedings have begun to try to recover the many months of owed wages for all 25 crew, Mr Arrachedi said.

While the cargo was said to have been sold, the Kuwaiti authorities have been trying to auction off the vessel.

“Even if the ship is sold for a good price and all of the wages are returned to these seafarers — what is the human cost? What is the price of this trauma?” Mr Arrachedi said.

He added that the Ula case had become one of the “most notorious” akin to modern slavery.

“Firstly, we have an employer hiding his true identity and ownership in the ridiculous corporate shadows allowed by the flag of convenience system, so that he can cut a crew loose and not have to face up to the financial and legal consequences of that decision,” he said.

“Then, we have a failure of the flag state, which might as well be a flag of convenience,” Mr Arrachedi said.

He added: “Palau, like other flags that are popular with dishonest shipowners, fail to enforce the standards that they are supposed to uphold under the MLC.”

The ITF said it was time to clean up this “toxic system of flags-for-sale”.

The worrying rise in abandonment cases reflected “a general increase in the abuse of seafarers’ rights”, the organisation's inspectorate co-ordinator Steve Trowsdale said, adding that this was a trend that the “flag state regulators were failing to address”.

“Certain flag states have failed to ensure their obligations as defined in the MLC are implemented by shipowners and, when necessary, enforced through action. Failure by these flag states to do their job has contributed to the rise of abandonments we are seeing,” he said. “Clearly, rogue shipowners think they can get away with it — and too many do.”

The co-ordinator said that flag states had a duty to ensure that seafarers employed and serving on ships which fly their flags are, as a minimum, afforded the benefits and protections provided for in the MLC.

“These registries and the countries that they represent are quite prepared to sell their flag to the lowest bidder,” he said, “but seem far less willing to intervene to take action when things go wrong. It’s a toxic system that must urgently be cleaned up.”

Mr Trowsdale said: “It’s not unreasonable to suspect that financial interests of these flag state registries might have some bearing on their cavalier attitudes to policing shipowners.

“Many registries are privatised, run for profit, or both.”

He added: “There is an urgent and long-overdue need to clamp down on the irresponsible registries which allow rogue shipowners to operate and treat seafarers like modern-day slaves.”

Human Rights at Sea announced a new initiative for the arbitration of human rights abuses at sea, including slavery, abandonment and denial of labour rights.

Not all countries should be in the flagging business