The frosty relationship between China and Australia, which has affected bilateral trade for commodities such as coal, barley and cotton, now threatens to disrupt the iron ore trade

China is willing to engineer large shifts in global trade flows to achieve its political aims. Apparatchiks are prepared to let China spend billions if it means the country can end its dependence on Australian commodities and ship them from more amenable nations 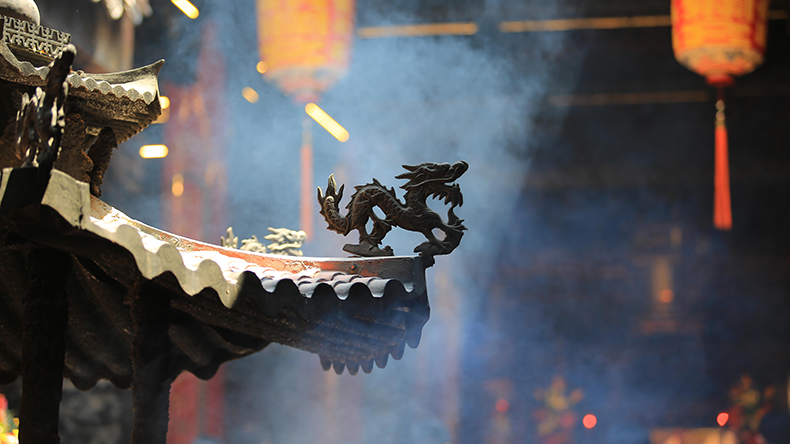 Source: Tse Pui Lung / Alamy Stock Photo China wants to leave the shadows of dependence on others and go it alone on key components to its economy such as iron ore.

AS THE largest importer and a swing buyer, China has a considerable power on the international iron ore trade and any change in Beijing’s import policy is set to create waves in the dry bulk market.

For many years, the shipping industry was used to a more normal growth pattern, until China came along. Its appetite for raw materials, especially for iron and coal, after the year 2000 drove up the dry bulk shipping market, and the Baltic Dry Index touched new highs at the 12,000 points level in 2008.

Before long, Chinese economic growth underwent a structural shift from an investment-driven to a consumption-led economy. Despite the recent slowdown, the long-term view for Chinese imports of raw materials remain intact.

Beijing is responsible for more than 70% of global iron ore trade and two thirds of its imports currently come from Australia.

Freight rate slide prompted by a dip in the forward market could just be a temporary blip in an otherwise strong setting. Iron ore will be more supportive in the coming quarter with higher volumes expected

However, the frosty relationship between China and Australia, which has affected bilateral trade for commodities such as coal, barley and cotton, threatens to disrupt the iron ore trade, with Chinese importers hesitant to enter new long-term contracts with Australian miners.

As things stand, China will still need to turn to Australian miners to meet demand even if it has bought every shovelful of iron ore dug up elsewhere.

Although the world is short on an inventory cushion when it comes to iron ore, geopolitics is sure to reshape supply chains and redraw one of the major trading lanes for the bulk carriers significantly impacting trade flows in the coming years.

At present, China has no choice but to grit its teeth and keep buying Australian iron ore, even as bilateral ties continue to fray.

In June 2020, Beijing amended some iron ore import screening regulations, rolling out measures that could be used to target Australian iron ore. But given the ongoing constraints to Brazilian supply, China did not really go further with it as the supply situation remained tight.

Ocean Analytics founder Ulf Bergman said there is no realistic alternative to Australian iron ore for China at the moment, adding that “after the series of dam incidents, compounded by the pandemic, Brazilian iron ore output is below its full potential.”

While much of the projected growth in iron ore output for the year is expected to come from Brazil, he argued that “it is not sufficient to replace any major portions of the flows from Australia.”

In 2020, Brazilian iron ore exports to China were around a third of Australian volumes, while this amount has decreased to a quarter so far this year.

As Brazilian iron ore production evolves to its full potential, it is also likely to contribute to a decline in Australia’s share of China’s imported iron ore, which will also add to the tonne-mile demand, he said.

Beijing’s desire to reduce its dependence on global supply chains is well documented and part of the current five-year plan, with the dual-circulation initiative aimed at bolstering the domestic economy while insulating it from external shocks.

Dozens of bulkers remain caught in crosshairs of China-Australia row

While China’s ban on Australian cargo has been positive for the dry bulk market, over 40 laden bulkers remain stranded in Chinese anchorages and ports with crews stuck on board for months, Lloyd’s List intelligence data shows

But this trend will run into capacity constraints before long as utilisation rates in mining in the past quarter were already at their highest since at least 2016. To address this, government officials want to step up investment in new mines, with the aim of becoming 45% self-sufficient in iron ore by 2025.

Although China is the world’s top importer of iron ore, its deposits are among the largest in the world. However, the mines have been left mostly untouched because of lower ore quality, which are commercially less attractive to exploit as compared with Australian ore.

Still, it appears that China is willing to sacrifice some efficiency in return for greater self-sufficiency.

There are reports that the government wants to boost the number of electric arc furnaces, which use scrap steel instead of iron ore to reduce shipments. To further support the policy, China has authorised the resumption of scrap metal imports in January this year following a near two-year ban.

Today’s high iron ore prices and the government’s new climate goals mean the transition is likely to pick up speed.

With relations so strained, China has shown a willingness to embrace large and disruptive shifts in global trade flows to achieve its political aims.

The economy is prepared to binge in billions if it means ending its dependence on Australian commodities and ship it from more friendly nations.

But even if they are not, China had already been switching its procurement of key commodities such as iron ore and coal, which it once depended on Australia to provide, even if new suppliers in places such as South Africa and Guinea do not offer the same benefits.

This putative procurement strategy is supported by the latest trade figures. Imports from Guinea and Sierra Leone so far this year were only 121,400 and 188,000 tonnes respectively, BIMCO said, citing Oceanbolt data.

Most analysts believe it is unlikely, and probably impossible, that China could entirely stop buying Australian ore anytime soon, such is the nature of its ravenous hunger for the raw commodity.

It is worth noting that, iron ore exports from Sierra Leone are a bit of an unknown quantity at this stage, says Mr Bergman, “problematic appears to be the keyword.”

Guinea, on the other hand, has the potential of becoming a bit of a game-changer, he added. “The ore is of high, or indeed very high, quality and the available deposits are considerable.”

Once the railway and deepwater port are developed, it is expected that Guinea will be able to export 60m tonnes by the middle of the decade.

Mr Bergman agreed that the volumes are likely to grow and could potentially reach 250m tonnes by the end of the decade if the likes of Rio Tinto decide to develop their parts of the project.

However, BIMCO’s chief shipping analyst Peter Sand argues that although Guinea has great potential in its iron ore supply, there is a way to go before the volumes are anywhere near the levels China needs to be able to cut Australia off entirely.

By Michelle Wiese Bockmann and Cichen Shen 10 May 2021

Australia is the biggest supplier of LNG to China, accounting for 45% or imports last year, Lloyd’s List Intelligence data shows

In the first five months of this year, 69.3% of total Chinese iron ore imports came from Australia, with the next being Brazil at 17.7% of the total, and then the next biggest was India at 3.4%, which Illustrates just how much other sources would have to step off if China were to cut Australia out of its iron ore sources, said Mr Sand.

But he also believes that over the next couple of years, as “the to-be-developed west-African mines get up and running,” some new success stories will be chalked up, which will provide a tonne mile boost to dry bulk carriers, as seems likely after the investments made by the Chinese.

Mr Bergman suggests that the Chinese commercial involvement in the project is likely to imply that most of the iron ore will go on export to China and replace some Australian imports.

“Such a round trip, from West Africa to China, will require an extra seven to eight weeks compared with an Australia to China voyage. Hence, tying up tonnage for longer.”

At the same time, Australian producers will seek to find alternative markets for the iron ore China no longer requires, which is likely to also involve longer sea voyages, he added.

But over that longer timespan, the iron ore trade landscape is likely to change in other ways, shipping analyst Maritime Strategies International’s senior analyst Alex Stuart-Grumbar said, pointing out that “as the availability of scrap steel in China starts to increase rapidly, we may see Chinese iron ore imports fall.”

The capesizes look set to be the main beneficiaries of this development, with increasing average haulage length.

“As often is the case, the shipping sector benefits financially from inefficient trade flows, but its carbon footprint would suffer at the same time,” Mr Bergman said.