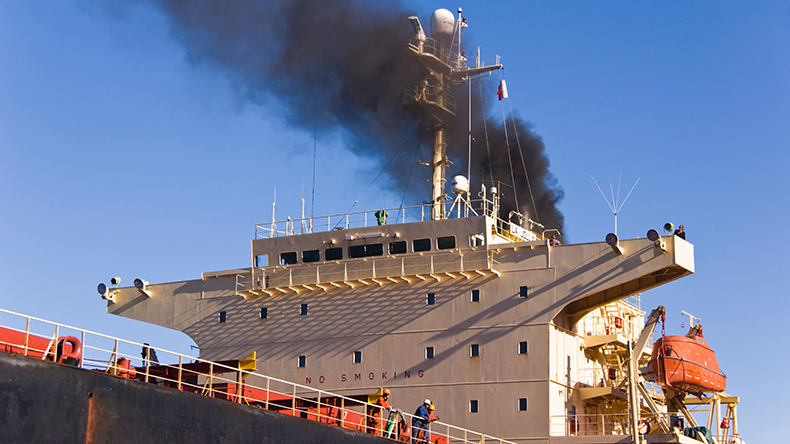 
International Maritime Organization plans for ships to cut CO2 intensity by 2% a year between 2023 and 2026 could actually boost overall emissions, according to BIMCO deputy general secretary Lars Robert Pedersen, who said they may also infringe on charterers’ basic rights. His comments come after the IMO’s intersessional working group on greenhouse gas emissions last Friday provisionally backed the proposals, as a short-term step towards cutting shipping’s CO2 intensity by at least 40% on 2008 levels by 2030.

One of the world’s largest tanker owners has defused concerns that the recent Royal Dutch Shell court ruling will impact the energy company’s charterers and intensify decarbonisation pressure on the oil carrier fleet. Hugo de Stoop, chief executive of Euronav, the owner and operator of 77 tankers, said it would be impossible for Shell to comply with last week’s ruling in the Dutch court that mandated a 45% cut in its CO2 emissions by 2030, from 2019 levels.

More than 40 fully cellular containerships are at anchor near Yantian Port, as the Southern Chinese export hub is struggling with severe congestion. The 44 vessels, with a combined capacity exceeding 470,000 teu, were dotting the Daya Bay area in the South China Sea on June 1, vessel tracking data from Lloyd’s List Intelligence shows. Analysts say it will take another week or two before congestion can be cleared, which could see already rocketing box freight rates “escalate again”.


Setting up as a shipping alt lender is easy. Round up some Cass buddies, rent desk space, raise a couple of hundred million bucks and farm it out to owners who cannot borrow elsewhere, right? Wrong. As part of a Special Report on shipping’s entrepreneurs, Lloyd’s List tracks the rise of Andreas Povlsen and Christoph Toepfer, two individuals who saw the opportunities opened up by the global financial crisis and stepped in to seize them.

Shipping is asking basic questions of entrepreneurs, the most obvious of which is: What is the return on investment? Lloyd’s List’s chief correspondent Richard Clayton, as part of this month’s Special Report, tackles the question that every entrepreneur should know — but is afraid to ask.

‘How shipping pollutes the planet, avoids taxes, dodges regulations, and gets away with it’ — is the eye-catching strapline to the recent documentary Black Trail which has caused a stir in shipping circles. The film may not have taught us anything new about emissions, policy-making or the business of shipping, but seeing an outsider’s view of shipping on display offers a revealing, and worrying, insight into how the industry is being portrayed. This week’s podcast features the two lead journalists behind the film, Zeynep Sentek and Craig Shaw.


Capesize bulker earnings have fallen further over the past week as a sharp drop-off in iron ore demand translated into a lack of activity among all the major iron ore miners in Brazil.

The fire on X-Press Pearl has nearly been put out as salvors are trying to tow away the blackened containership. Meanwhile, the Sri Lankan Marine Environment Protection Authority says it will take legal action against the owners of X-Press Pearl, its crew and insurers in what it describes as potentially the “worst marine pollution” Sri Lanka has ever suffered.

Containership owner Costamare has increased its dividend after a strong start to the year that has so far seen it sign deals to acquire 15 boxships.

The Global Maritime Forum says 7.4% of seafarers are working past their contracts, up from 5.8% a month ago, as travel curbs imposed amid India’s coronavirus surge start to bite.

Lloyd’s Register has launched a new Maritime Performance Services hub for South Europe that aims to help guide shipowners and managers through a maze of factors currently impinging on industry decision-making, including decarbonisation requirements over the next 10-30 years.

Wan Hai Lines has signed for four additional 13,100 teu newbuildings with Samsung Heavy Industries, pushing the size of its latest round of order spree to 13 post-panamax containerships worth about $1.5bn.

Danish shipowner and operator Norden has revised up its full-year profits guidance based on a continuously strong dry bulk market.