The IMO’s next environmental targets will require ships to cut CO2 intensity by 40% by 2030 and by 70% by 2050 compared with 2008, while the European Union is to include shipping in its Emissions Trading System starting in January next year Source: Islandstock / Alamy Stock Images It is likely that a combination of measures, including new fuels and better efficiency, will be needed to meet the IMO’s CO2 targets

THE shipping industry faces a new environmental challenge to sharply reduce its carbon dioxide emissions, following the commitment to cut sulphur in marine fuels to 0.5% in January 2020.

The International Maritime Organization regulation, which lowered the sulphur content of marine fuels burned in international waters to 0.5% from 3.5%, was, by and large, smoothly implemented.

Separately, the European Union voted in September 2020 to include shipping in its Emissions Trading System starting in January 2022, although the legal text has yet to be finalised.

The ETS is a mandatory CO2 cap and trade system which would apply to European and international vessels travelling in EU waters. 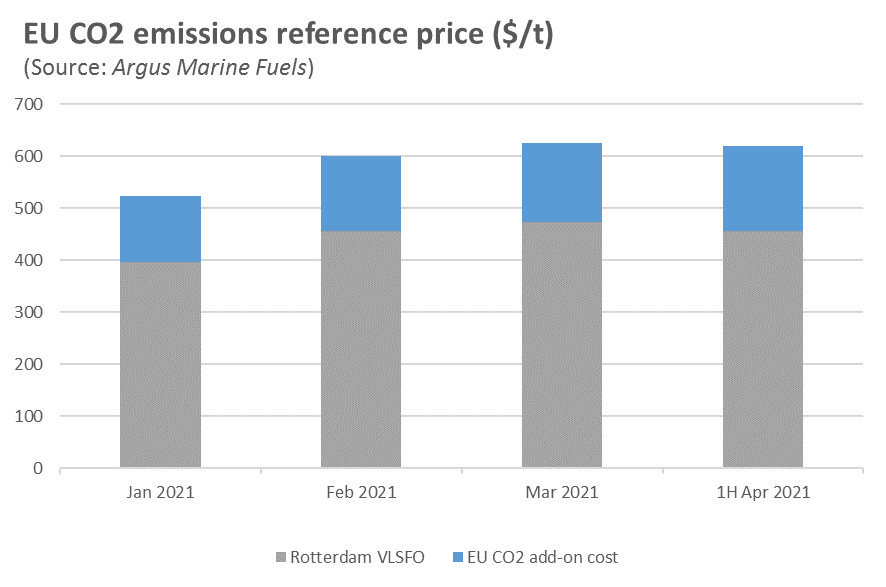 Burning 1 tonne of very low-sulphur fuel oil (VLSFO) emits about 3.15 tonnes of CO2. Argus assessed ETS CO2-equivalent emissions at $49 per tonne and Rotterdam VLSFO at $474 per tonne average in March 2021. In this instance, paying for CO2 emissions will raise the price of VLSFO by $153 per tonne, or 32%.

To lower carbon emissions, shipowners have been looking into more energy-efficient engines and experimenting with an array of low-carbon fuels and batteries.

LNG is the most widespread current alternative fuel. There are nearly 200 vessels sailing worldwide powered by LNG, according to classification society DNV, and there are nearly 300 currently on order.

LNG emits 15%-21% less CO2 than 0.5% fuel oil, but using grey LNG alone is not enough to meet the IMO’s 2030 goal. There are also concerns with LNG about methane slip, a much more potent greenhouse gas than CO2.

Favourable Dutch regulations mean the Netherlands is dominant at present in marine biofuels, which comprise nearly 10% of Rotterdam’s 2020 bunker sales of around 9m tonnes.

Mostly off-spec road transport biofuels were used to create marine biofuels in Rotterdam in 2020. However, since April 2021 only advanced biofuel feedstocks have been permitted to generate renewable energy unit tickets in the Netherlands, with availability an early concern.

Further along the route of alternative fuels are green ammonia and green hydrogen, which emit no greenhouse gas emissions when burnt, and can be produced in a carbon-neutral process.

Hydrogen is already a mature technology on land, but storage on a ship will present a problem due to its low energy density compared with current bunker fuels.

Hydrogen can also be used to make green ammonia and some think this will be hydrogen’s main role in shipping’s decarbonisation, rather than as a fuel itself.

Ammonia is already widely produced for fertiliser, but significantly more will need to be made to satisfy demand as a shipping fuel. ABS (American Bureau of Shipping) has forecast ammonia and hydrogen will make up nearly 40% of marine fuel consumption in 2050, from just 3% in 2030. 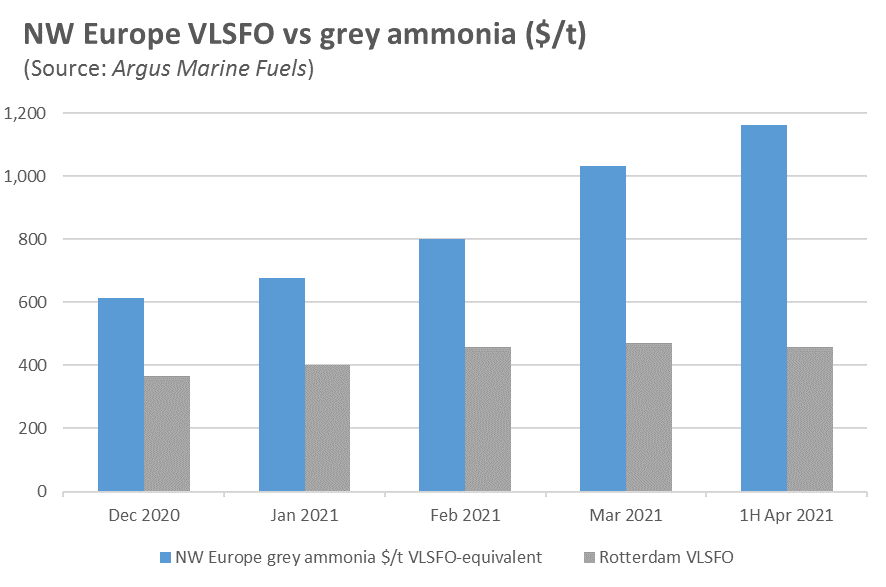 Argus assessed northwest Europe grey ammonia on a VLSFO-equivalent basis at $1,031 per tonne average for March 2021, more than double the price of Rotterdam VLSFO, which Argus assessed at $471 per tonne.

Even though grey ammonia does not emit CO2 at burning, it generates CO2 during production, from using fossil fuels such as natural gas or coal as feedstocks.

For this reason, shipowners are interested in green ammonia, produced using carbon-neutral sources such as wind and solar power, but its price is much higher at present than grey ammonia.

It is likely that a combination of measures, including new fuels and better efficiency, will be needed to meet the IMO’s CO2 targets, but with political pressure mounting to meet ever more ambitious targets, shipping will continue to come under scrutiny to play its part.

Legal worries are unnecessary roadblocks for climate action at the IMO