Free to read: Shipping left Shell shocked | Governments agree new CO2 reductions, but only until 2027 | Why we shouldn’t dismiss shipping’s Black Trail | Is this the golden age for shipping entrepreneurs? 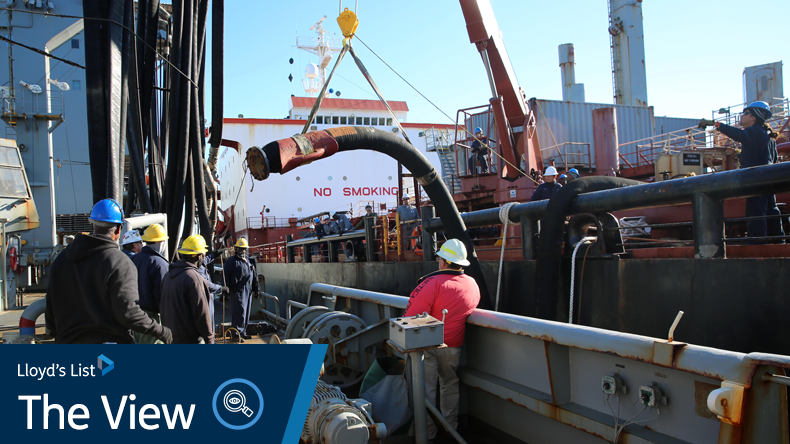 UK Spring Bank Holiday: The next Daily Briefing will be published on Tuesday, May 2, but slightly later than normal.


Shell’s court ordered emissions cut and the Green coup at the hands of activist investors at ExxonMobil and Chevron last week will have repercussions for shipping well beyond the immediate news cycle. Change is coming faster than many would like, there is now an urgent need for the industry to adapt or face the consequences. The succession of landmark decisions for the supermajors last week is not just an energy issue — from similar legal action potentially taken against major shipping companies for their environmental record, to a more precarious outlook and for companies moving fossil fuels, shipping companies will be affected by last week's developments.

Governments have preliminarily agreed to force ships to reduce their CO2 intensity by 2% annually between 2023 and the end of 2026, but failed to agree on further reductions through to 2030. Countries at the International Maritime Organization agreed on Friday to the new reduction rate as part of a short-term measure that aims to help international shipping reduce its average CO2 intensity by at least 40% by 2030 compared with 2008.

‘How shipping pollutes the planet, avoids taxes, dodges regulations, and gets away with it’ — is the eye-catching strapline to the recent documentary Black Trail which has caused a stir in shipping circles. The film may not have taught us anything new about emissions, policy-making or the business of shipping, but seeing an outsider’s view of shipping on display offers a revealing, and worrying, insight into how the industry is being portrayed. Our weekly podcast features the two lead journalists behind the film, Zeynep Sentek, and Craig Shaw.


A post-Covid surge in start-ups is expected, fuelled by abundant tech funding and targeting an ample supply of industry problems with their innovative solutions. But is the shipping industry ready to open the door to new ideas and provide the collaboration needed to scale these entrepreneurial talents beyond the quickly burned seed capital stages? As part of a Lloyd’s List Special Report, we ask whether this is the golden age for shipping entrepreneurs.

The port of Los Angeles is well on the way to a new annual record of 10m teu, but that record could be just the beginning of even higher numbers in the years to come, according to port executive director Gene Seroka.


Container freight spot rates to Europe ex-Asia have continued their relentless rise, with rates now closing in on $6,000 per teu for Shanghai-northern Europe volumes.

Containerships continue to dominate newbuilding contracting, responsible for the lion’s share of the 120% rise in ordering activity in 2021 compared with the first five months of the past year.

Avance Gas, a Norwegian company operating very large gas carriers, has a positive outlook on the market given an anticipated rise in liquefied petroleum gas exports from the US this year.


The Australian Maritime Safety Authority has banned a bulker technically managed by a Turkish company and owned by a Qatari shipping firm for 36 months owing to ‘serious deficiencies’.

Failure to adapt to climate change is one of the biggest security to ports and shipping, a webinar was told, while cyber attacks and economic harm from coronavirus are more immediate threats.

The port of Yantian has extended its suspension with regard to taking in loaded containers amid worsening congestion and an ongoing coronavirus backdrop.

The fire on the vessel X-Press Pearl has been “contained considerably” as Sri Lankan authorities begin to clean up chemical debris and assess pollution from the eight-day blaze.

Three crew members have been reported missing after a Japanese ro-ro vessel sank on collision with a chemical tanker off the coast of Ehime Prefecture in western Japan.