The two post-panamax newbuilds will be chartered to Mediterranean Shipping Co, which is still in talks with Minsheng Leasing and DSIC to order four more, according to sources familiar with the deal

Fresh tonnage will be fitted with scrubbers and adopt the so-called LNG-ready design, meaning their propulsion systems can be converted to burn liquified natural gas if needed in future 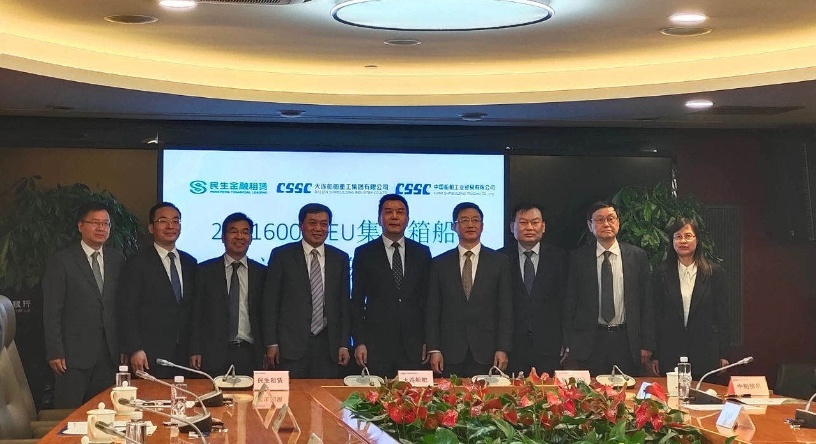 Source: DSIC A signing ceremony was held between the lessor and the yard for the 16,000 teu vessel order.

The Chinese yard, part of state conglomerate China State Shipbuilding Corp, said the fresh tonnage is a duplicate of the seven newbuildings agreed in March.

They will be fitted with scrubbers and adopt the so-called LNG-ready design, meaning their propulsion systems can be converted to burn liquified natural gas if needed in future.

Sources familiar with the deal said the vessels would be chartered to Mediterranean Shipping, which is in talks with the Minsheng Leasing and yard to order four more.

The prospect of a favourable deal from Eastern Pacific; pressure from cargo interests keen to see a portion of LNG in the fleet; and a pro-LNG stance from MSC’s chief executive Søren Toft appear to have been enough to convince MSC chairman Gianluigi Aponte that a limited LNG-fuelled portfolio represents a pragmatic bet

The Geneva-based carrier and the Chinese lessor have been approached for comment.

MSC was reportedly also behind the March orders — consisting of a total of 13 16,000 teu ships, including seven at DSIC and six at its sister firm Guangzhou Shipyard International — although the shipowner has not confirmed or denied the claim.

Brokers say Minsheng Leasing may have picked up the optional vessels held by MSC in the previous deal.

The order binge comes as the world’s second largest container shipping carrier is on track to move up another rung in the sector.

It operates a fleet of 591 boxships comprising nearly 4m teu. That compares with 707 ships run by the current number one Maersk, with an aggregate capacity of 4.1m teu, latest figures from Alphaliner show.

The move represents a significant shift in strategy for the world’s second largest container shipping carrier, which had resisted the accelerating trend towards LNG-fuelled tonnage.

MSC closes in on Maersk as largest operator of containership tonnage