For the sake of all involved, there must be a just — and rapid — settlement of insurance issues arising from the Ever Given grounding. A deliberately inflated demand helps nobody 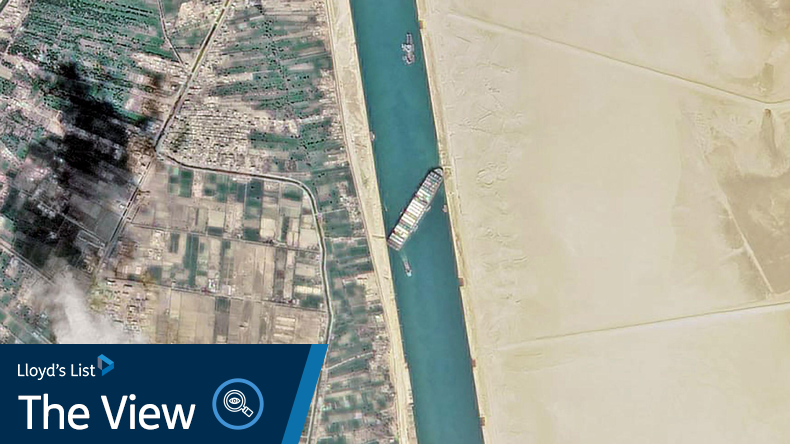 Source: ITAR-TASS News Agency / Alamy Stock Photo Off the record, many marine insurance professionals have expressed astonishment at the chutzpah of the claim being made by Egypt over the Ever Given.

THE television cameras — and with them the public gaze — have moved on from the Suez Canal.

With traffic flows back to normal, owners and operators not directly involved can be forgiven for thinking no more of the grounding of Ever Given last month.

But marine insurers have been left aghast at the Suez Canal Authority’s arrest of the boxship, as a means of putting leverage behind its blockbuster $916m compensation bill.

Given the delicacy of the situation, public comment is impossible, and the underwriting equivalent of omerta prevails.

Yet behind the scenes, the feeling is very much that the sum sought is not just silly, but simply outrageous.

What we are seeing may be, in sales parlance, a highball bid, proffered tactically in the expectation that insurers will try to beat it down.

There may also be an element of national pride at stake, not to mention genuine penury.

As a publication based in London, also home to some of the insurers involved, it would be tone deaf not to factor in potential historical resonances.

Britain colonised Egypt in all but name after 1882, precisely on account of the canal, and invaded again in 1956, exemplifying Marx’s famous dictum that great events often recur the second time as farce.

The days when pith helmet-clad Brits with double-barrel surnames called the shots while blithely plundering the country’s immense architectural treasures are long gone, and there can be no question of dictating terms. Egypt is legally and morally entitled to a fair deal.

But the quest for close on a billion bucks is taking the mickey, to euphemistically paraphrase some of the comments marine insurance professionals have made in private.

The six-day shutdown caused by the Ever Given grounding does not necessarily mean six days’ loss of revenue, as most of the backed-up traffic eventually made the transit and paid the toll. But let’s not quibble; $100m should meet the tab.

Legitimate salvage expenses must be met. Let the SCA present an itemised account, which will presumably be in the order of tens of millions.

Some element by way of saying sorry for the aggro and the inconvenience is also arguably reasonable.

Tot everything up, and this is nothing that, say, $225m shouldn’t comfortably cover. Asking for four times that figure — including a $300m for a ‘salvage bonus’, whatever that might be, and a further $300m for ‘loss of reputation’ — is transparently petulant.

The sense that SCA is grandstanding is only heightened by the news that the crew are not able to leave the ship.

It has nothing whatsoever to do with regular guys who work hard for a living, who could now be stuck on board for an extended period while wrangling between desk jockeys of various stripes goes on over their heads.

Unless there are any grounds to suggest culpable navigational error — and no-one has mentioned this possibility so far — they should be allowed to take recreation ashore, and fly home once their tour is concluded.

Seafarers are human beings, not bargaining chips. Most of them are Indian nationals in this instance, and we trust the Indian government will make suitable representations.

From a technical standpoint, American Bureau of Shipping has completed the necessary class surveys and declared Ever Given is fit to sail.

Now the industry now needs to know what happened and what lessons are to be learned. Accident investigations are ongoing, and flag state Panama must complete it with alacrity, and publish the findings as soon as possible.

General average has been declared, and the cargo interests have one hell of a legitimate grievance. Some 20,000 teu-worth of goods are still sitting in the Great Bitter Lake when they should have arrived at destination long ago.

It is in the interests of all concerned to seek rapid resolution of all outstanding concerns.

The UK Club has tabled what it describes as a carefully considered and generous counteroffer. Its size is undivulged, although it may be of the order we suggest above.

The constructive way forward stares everybody in the face; post suitable security; let the vessel finish its voyage; get the cargoes to the consignees; sign the crew off; get the arbitrators on the case; and work out a settlement everybody can live with.

What no rational person should want is for is for the matter to become needlessly politicised, dragging on for months or even years, to the common detriment of all. We can only urge Egypt not to go down that road.