While all eyes are on the impact the Suez grounding will have on shipping and ports, white-collar shipping services professionals have plenty of cause for concern

‘This single case does not put our markets under pressure. The bigger picture is liability, and this is where it could get desperate. This is very bad news for the P&I clubs, that’s for sure,’ argues IUMI secretary-general 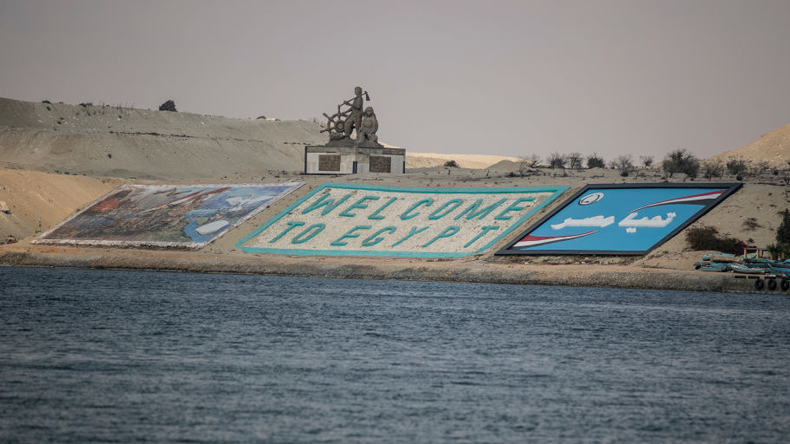 Source: Mahmoud Khaled / Getty Images The big-ticket exposure will be for liability, especially if the Suez Canal Authority decides to impose penalties on operator Evergreen, or seeks compensation for its loss of revenue.

THE Ever Given grounding will have a big impact not just on the physical shipping and ports business, but on the whole maritime white-collar services sector as well, according to sources in marine insurance and ship finance.

Like everyone else, professionals in these areas are still watching how developments roll out in real time. But the likely payout is already being assessed as likely to hit nine-figure dollars.

The big-ticket exposure will be for liability, especially if the Suez Canal Authority decides to impose penalties on operator Evergreen, or decides to seek compensation for its loss of revenue.

Damages, fines and compensation for the Suez Canal Authority set to be the largest items on what is looking like a big bill

That, in turn, boils down to Egyptian politics. But the country’s military ruler Abdel Fattah al-Sisi has little motivation to go easy.

The canal is a major earner of hard currency for the regime, and its importance has only been bolstered by the downturn in tourism income that has inevitably come as a corollary of the pandemic.

Marine liability is insured by P&I clubs, in this instance the UK Club, which is not offering media comment on the matter at this time.

Any claim from the Suez Canal Authority will easily bust the $10m retention layer, and could even exceed the $100m collective retention provided by the International Group of P&I Clubs, to which the UK Club is affiliated, thus hitting the reinsurance layer.

Ratings agency Fitch has flagged the casualty up as a large loss event for the re market, on a scale sufficient to hurt reinsurers’ earnings, but not to the extent that credit ratings are imperilled.

Meanwhile, shipping law firms have the prospect of extensive litigation on behalf of cargo interests, especially if general average is declared on the casualty.

Most them are declining to discuss the matter on the record, on the grounds that they expect to be taking on a share of that workload.

Lars Lange, secretary general of the International Union of Marine Insurance, stressed that the extent of eventual claims was still unknown, but described the nine-figure estimate as likely.

But he qualified that by adding: “When it comes to concrete numbers, I have no idea and nobody has any idea.”

Marine insurance is already having to contend with challenges such as fires at sea and the recent spate of container stack collapses, but is managing to cope.

Hull and cargo insurers, and their reinsurers, will have no issues about paying out, because that is what they are there for.

“This single case does not put our markets under pressure. The bigger picture is liability, and this is where it could get desperate. This is very bad news for the P&I clubs, that’s for sure.”

He declined to comment on the prospect of the liability claim hitting the reinsurance market, in line with Fitch’s prognosis, although he conceded that it was possible.

One of its mainstays is insuring containers, which inevitably means that it has exposure to an incident involving one of the world’s largest containerships, operated by Taiwanese boxship outfit Evergreen.

“We cover the containers themselves, and while they won’t all be Evergreen containers, we are substantially exposed to all the partners who are involved with Evergreen.

“But apart from general average, we are not going to see much exposure there, and the general average exposure from the containers will be mitigated by the value of cargo in laden boxes,” he said.

At this point, GA has not been declared.

But extensive cargo damage appears unlikely, at least at this stage, so again, exposure will probably prove minimal.

“For most players in the industry, this will be just another claim that goes in the mix over the span of the year, and will be evened out over the year. The much greater impact will be on trade rather than insurance itself.”

Marcus Baker, global head of marine and cargo at leading broker Marsh JLT Specialty, said: “The claim could be significant. But it all depends on how the economic loss of the other ships, damage to cargoes and additional expense is looked at. Where do you draw the line on this?

“Without this element, I would expect the claim to be in the low hundreds of millions, a pool claim for sure and probably a reinsurance claim.”

Andreas Povlsen a managing director of Hayfin and head of the firm’s Maritime Funds team, said everybody had a common interest in the resumption of normal trade flows, and predicted a regulatory shake-up in the wake of the Ever Given incident.

“The Suez Canal is big business for Egypt. It’s about $200,000-$400,000 for vessels to go through [depending on their size and on the prevailing cost of rounding the Cape of Good Hope], so it’s big bucks.”

One real possibility now is tighter regulatory stipulations, especially for the biggest vessels most at risk of blocking the canal.

Another question is how insurers are going to price the prospect of the recurrence of such an event, especially for the big ships, and whether that factor might impact on routing decisions.

More broadly, the course of the pandemic has seen shipping rates go from a position where all segments were in a horrific state, with earnings low all round, to a surprising rebound, not least for containers.

“We’re all sitting at home, clicking on Amazon to buy stuff we need or don’t need, and you suddenly saw a huge uptick in rates. What is certainly true is that in a logistic chain that is already under a lot of pressure, something like this is going to add to the pressure.”

Supply chains need to build in more slack, he opined. Countries will find it increasingly unacceptable to be faced with the risk of disruption, especially for supplies of vaccines and personal protective equipment.

Moreover, there is the omnipresent risk in shipping that an uptick in earnings will tempt owners into orderbook folly.

That would be facilitated by greater willingness on the part of lenders to open up their purses, at least in principle.

“Everybody is earning a bit more money, especially on the container side, and you can fix your ships for two or three years to the big liner companies. From a ship finance perspective, the banks are willing to finance some of these cashflows.”

Non-bank lenders are now established players, and have shown that they can both move fast and handle big tickets, which will make the market more interesting on the asset side.

Ever Given owners appeal arrest as clubs brace for reinsurance hit