After six days of disruption, the Suez Canal is preparing to reopen after the grounded containership Ever Given is finally freed and able to get under way 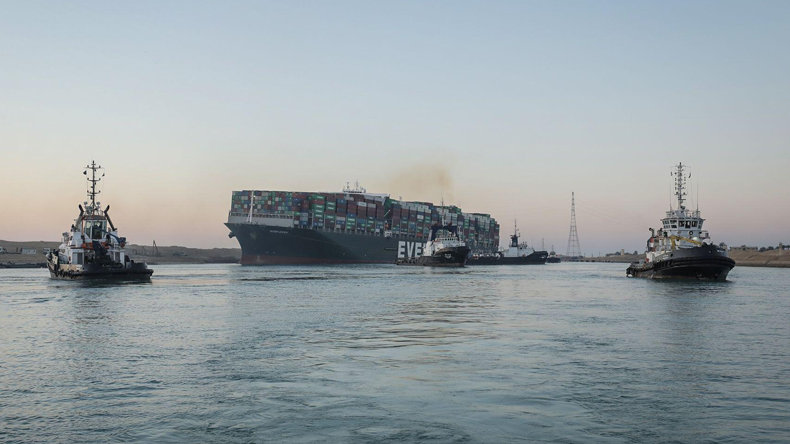 Source: dpa picture alliance/Alamy Live News Tugs today positioning Ever Given with its prow clear of the canal bank.

THE ship that has been blocking Suez Canal transits appears to have finally been pulled clear of the bank side and is now in mid channel, according to automatic identification system data from Lloyd’s List Intelligence.

The previous reading had it moving south at 1.5 kts, suggesting tugs were able to pull it back off the canal side and are now manoeuvring it towards the Great Bitter Lake.

Local news coverage on posted on YouTube shows the vessel under way, with tugs alongside.

Video footage posted by the Suez Canal Authority on Facebook showed the corrected position of the vessel.

UPDATE: The containership blocking Suez Canal transits appears to have finally been pulled clear of the bank side and is now in mid channel, according to AIS data from Lloyd’s List Intelligence

A statement from Evergreen, the vessel’s charter, said the ships would be repositioned to the Great Bitter Lake in the Canal for an inspection of its seaworthiness.

“The outcome of that inspection will determine whether the ship can resume its scheduled service,” Evergreen said.

“Once the inspection is finalised, decisions will be made regarding arrangements for cargo currently on board.”

Evergreen added that it would coordinate with the vessel’s owner to deal with “subsequent matters” after the shipowner and other concerned parties complete investigation reports into the incident.

German container line Hapag-Lloyd said that now the vessel was underway to the Great Bitter Lake for inspection and repair, it expected transits to start later this evening.

“It is still not clear if any vessels might be prioritised for passage,” Hapag-Lloyd said in a customer advisory. “The current backlog should be cleared within four days.''

Ever Given had been blocking the Suez Canal since March 23.

According to Lloyd’s List Intelligence vessel-tracking data, 372 vessels were stalled waiting to transit the Suez Canal on Sunday.

A total of 80 containerships were still waiting, but diversions of container traffic for the Asia-EU and EU-Asia trades started accelerating over the weekend, with dozens of vessels now starting to reroute.

No security risks from impact of Suez Canal blockage