The course of the boxship Ever Given, which has blocked the Suez Canal since March 23, has been corrected by 80%, according to the Suez Canal Authority

UPDATE: The containership blocking Suez Canal transits appears to have finally been pulled clear of the bank side and is now in mid channel, according to AIS data from Lloyd’s List Intelligence 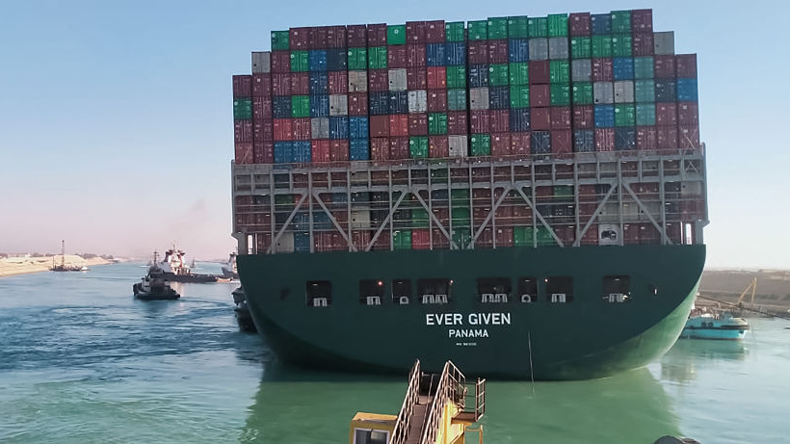 Source: AFP via Getty Images The view from a tug earlier today as the stern of Ever Given was moved away from the canal bank.

THE grounded 20,000 teu containership Ever Given, which has been blocking the Suez Canal since March 23, has been partially refloated, the Suez Canal Authority has said.

The vessel was successfully refloated at 0430 hrs local time and has been moved away from the bank of the canal. However, salvors have warned that the bow remains embedded in rock.

“We have movement, which is good news. But I wouldn’t say it’s a piece of cake now,” Peter Berdowski, the chief executive officer of Smit Salvage’s parent company Boskalis, told Dutch public radio.

By James Baker, Janet Porter, Michelle Wiese Bockmann and Richard Meade 27 Mar 2021 Updated March 28, 22:30 BST: Repeated attempts to re-float the grounded Ever Given over the weekend have failed as salvors struggle with rock under the ship’s bow. Meanwhile, Maersk has warned of higher short-term spot rates and told customers to expect months of disruption Read the full article here

The SCA chairman Osama Rabie said the vessel was successfully floated following “tension and towing manoeuvres, whereby the ship’s course was significantly modified by 80% and the stern of the ship moved away from the shore by a distance of 102 metres instead of 4 metres.’’

A statement said the manoeuvres are scheduled to resume again as the water level rises to its maximum height later today “allowing the ship’s course to be completely modified to the midway’’.

According to Lloyd’s List Intelligence vessel-tracking data, 372 vessels were stalled waiting to transit the Suez Canal on Sunday.

A total of 80 containerships were still waiting, but diversions of container traffic for the Asia-EU and EU-Asia trades started accelerating over the weekend, with dozens of vessels now starting to reroute.

Despite the anticipated reopening, container lines are warning the disruption to supply chains will last several months and is likely to cause a short-term spike in rates.

“For every day the canal remains blocked, the ripple effects on global capacity and equipment continues to increase and the blockage triggers a series of further disruptions and backlogs in global shipping that could take months to unravel, even after the canal is reopened,” Maersk said in a customer advisory issued on Sunday.

“For the immediate term, we also anticipate higher short-term (or spot) rates, with vessels being delayed this week and missing in the system.”

The line also added that it would have to manage its bookings due to the disruption and advised that it “will not be accepting cargo where we cannot ensure space”.

Most major container lines have begun to divert ships round the Cape of Good Hope and warned that supply chain disruption could take months to unravel.

Sea-Intelligence warned in a report over the weekend that even if the key waterway in Egypt reopens in just a few days, the ripple effects “will be felt for several months to come, as the disruption gradually spreads outwards.”

One of the world’s largest containerships wedged athwart the Suez Canal has offered the shipping industry a timely reminder that super-sized ships can create super-sized problems, argues Allianz head of global marine risk

That is because the canal blockage could result in a reduction of available containership capacity of 6% if carriers are forced to take the longer route around the Cape of Good Hope, while the ability to absorb that shortage is limited due to the lockdown-led equipment constraints.

“This means that market participants should prepare their contingency plans for the rest of the second quarter and stretching into the third quarter.”

Assuming all Europe-bound vessels are rerouted via the southern tip of the Africa, the tonne-miles of Asia-Europe trade will increase by more than 30%, according to estimates from Shanghai-based SWS Research.

“This could help sustain the current high freight rate levels during the down season of the container shipping markets,” said the brokerage.

Why shipping is tough enough to endure the Suez closure