With the Suez Canal set to remain closed, the first containerships are starting to take the long trek around southern Africa to return to Asia

HMM has turned an ultra-large containership around to avoid entering the Mediterranean. The vessel and its sister ship will now head for Cape of Good Hope to get back to Asia 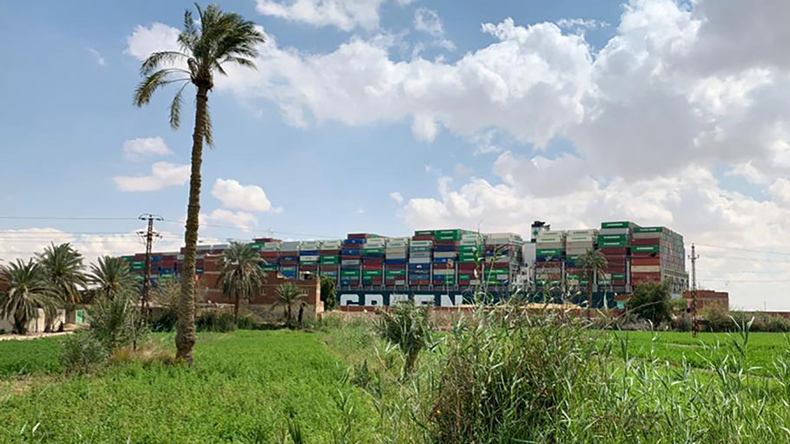 Source: AFP / Getty Images Ever Given pictured today: Salvors warn it could take several weeks to clear the Suez Canal, particularly if it is necessary to lighter boxes off the ship.

THERE is evidence that container lines are starting to take the long route around southern Africa on the backhaul to Asia, rather than wait for the Suez Canal to reopen.

Vessel-tracking data from Lloyd’s List Intelligence shows that the 23,820 teu HMM Rotterdam (IMO: 9868338), which was previously destined for Port Said, performed a U-turn just before entering the Strait of Gibraltar and is now off Casablanca, heading south.

The vessel, which had last called at DP World’s London Gateway terminal, was en route back to Asia when it changed course overnight.

Automatic Identification System tracking showed it heading east at 0259 hrs GMT, but by 0302 hrs it had begun to alter its course to turn back on its track and head south.

A second HMM ultra-large containership, the 23,964 teu HMM Dublin (IMO: 9863314), will have to make a similar decision shortly. It is heading south off Lisbon, destined for Suez, but could continue south rather than take the turn into the Mediterranean.

In the past few hours, its heading has changed westward from 170° to 185°, indicating it will avoid Suez.

In the Atlantic, there were also signs that diversions are beginning for ships returning to Asia from the US east coast.

The decisions follow moves by at least one container line to reroute around the Cape of Good Hope on the headhaul.

As Lloyd’s List reported, Evergreen’s the 20,000 Ever Greet (IMO: 9832729), a sister ship to Ever Given (IMO: 9811000), which caused the canal blockage, altered course to avoid the congestion building up outside the canal and instead turned south to take the long route to northern Europe.

Data from Lloyd’s List Intelligence indicates it is so far the only vessel to have decided to take the southern route to avoid Suez, but others are expected to join it if the canal remains closed for much longer.

The Suez Canal remains closed to traffic in both directions. Carriers are now looking at adding a week to their voyage time to take cargoes south of Africa to get to Europe

Evergreen will make the decision on whether to reroute ships via the Cape of Good Hope on a ship-by-ship basis, according to Evergreen Marine (UK) honorary chairman Maurice Storey.

The Taiwanese line has already diverted the Europe-bound Ever Greet, but whether others will follow depends on what happens on Sunday and Monday when another attempt will be made to refloat Ever Given during a higher-than-normal tide, Mr Storey told Lloyd’s List.

Lloyd’s List Intelligence data collated today shows that the number of ships awaiting a canal transit is 248, compared with 213 yesterday.

The remainder are made up of crude and product tankers and 15 vehicle carriers.

Ever Given remains firmly attached to the bank of the canal, where it has been since it grounded on Tuesday morning.

In an emailed statement, the ship's manager, BSM, said that the latest efforts to move the vessel this morning were unsuccessful.

The focus remains on dredging to remove sand and mud from around the port bow and a specialist suction dredger arrived on scene on Thursday.

Salvor Smit has confirmed two tugs, with 220-240 tonnes bollard pull, will join the effort on Monday if the vessel has not moved by then.

Monday is perhaps the last good hope salvors have of floating the vessel off with out lightering, as it coincides with a 2.1 m spring tide. After Monday, falling tides will make the task more difficult.

Even if Ever Given is cleared from the canal, the build-up of ships waiting for transit could take time to clear. On average, there are only 50 transits a day, and the canal’s one-way convoy system means it is difficult to increase the capacity of the canal.

For shipping companies, this now means making the decision to route around Africa, thereby adding another week to the passage time, or waiting off the canal in the hope that it will reopen.

But salvors have warned it could be several weeks before the waterway is cleared, particularly if it is necessary to lighter containers off Ever Given in situ.

Concerns are now mounting about what this will mean for the already fractured containerised supply chain.

Shippers have been frustrated by long delays in cargo arrivals caused largely by a shortage of available equipment and congested ports.

While the postponement of ship calls may superficially appear beneficial in terms of the congestion problem, it will also lead to a bottleneck of exports from European ports and a further shortage of containers.

Slower backhaul journeys will have a similar impact in Asia’s export hubs as the return of empties is delayed.

But uncorking the canal will also lead to a sudden flood of inbound containers to European destination ports that will further increase delays and congestion.