COP26 in Glasgow may judge kindly what shipping has been able to achieve since the 2015 Paris Agreement. Mounting pressure on governments to accelerate decarbonisation action means the sector should be ready too for stricter demands in the fallout 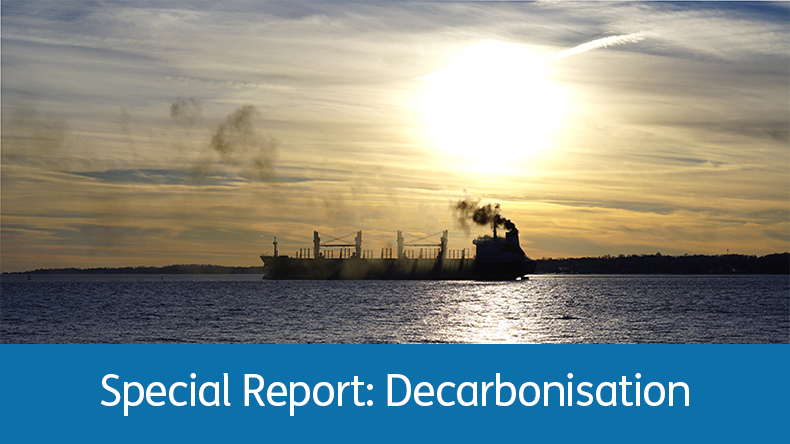 Source: SmallPrints / Shutterstock.com Much like other industries, a mentality shift in shipping has been evident, as well as commitments for zero-emissions ships by 2030.

WHEN governments meet in Glasgow in late November for the most important environmental conference since the 2015 Paris Agreement, shipping will not top the agenda — but it will be an easy target.

In the course of a likely hectic and tense 12 days in the Scottish city, governments will also scrutinise the progress the International Maritime Organization has made in decarbonising an industry that contributes to just under 3% of global greenhouse gas emissions.

Those close to COP26 do not believe progress has been adequate.

Peder Osterkamp, shipping lead for COP26 climate action champions — tasked with bringing together non-state actors like businesses, cities and non-governmental organisations to mobilise the race to zero emissions and climate adaptation and mitigation — believes that the IMO has not done enough in practice.

“It is time to be clear that every sector needs to decarbonise by 2050. There is no exception,” Mr Osterkamp told Lloyd’s List.

In the almost three years since the IMO adopted its initial strategy to tackle GHG emissions and committed to reducing its GHG emissions by at least 50% by 2050 compared to 2008, global pledges of net zero emissions by the middle of the century have become the norm.

However, Mr Osterkamp said the action it has taken so far — especially when it comes to short-term measures — has been far from impressive.

Mr Osterkamp’s assessment will be hardly surprising to those in tune with high-level external commentary aimed at the industry.

UN secretary-general Antonio Guterres said in December 2020 that current regulations in shipping are not compatible with ambitions to deliver zero-emissions ships by 2030 and need to be strengthened.

If governments and COP26 echo this sentiment in November and decide the IMO has not been pulling its weight, Mr Osterkamp warned that could change how shipping emissions are regulated.

“It might not be that the IMO has the monopoly forever,” he said.

Much like other industries, a mentality shift in shipping has been evident — at least from the larger stakeholders — as well as commitments for zero-emissions ships by 2030, pledges for net zero emissions and greater requirements from lenders and charterers.

Yet the global face of shipping is still the IMO, and there is no greater proxy for progress in shipping decarbonisation.

The reprimands coming from outside the sector can, at times, feel strange and confusing. Some of the governments that regulate shipping through the IMO will be the same ones likely chastising the industry in Glasgow later this year.

Part of that may be the discrepancy between transport officials at the IMO and environment officials crafting climate policy at home, who can also increasingly be seen at the IMO. Part of it may also be the influence that industry and corporations have at the IMO.

Arguably, though, it is also down to the distinct lack of attention that governments pay to shipping, with its mostly non-existent voting constituents, unless it suits political ends.

Shipping may be a unique and idiosyncratic industry and the long-established grip of the IMO on its regulation, including its decarbonisation, can create a false sense of isolation and insulation from the machinations of global geopolitics.

Aside from countries potentially committing to higher reductions of their domestic shipping emissions, COP26 will likely result in greater direct pressure on shipping and the IMO to act faster on emissions cuts than their current plan, devised three years ago, dictates.

This is the sort of higher-level action that would be difficult to ignore and could be a catalyst for a different pace of regulatory action seen so far, ultimately culminating into a commitment in 2023, when the IMO reviews its strategy for full decarbonisation by mid-century.

When the IMO’s Marine Environment Protection Committee meets in June, regulators will want to wrap up the short-term technical and operational efficiency measures on shipping emissions, which the industry argues are even more vital and challenging, despite claims from environmentalists that they are insufficient and weakly enforced.

As the dust settles on those measures, the MEPC will have to tackle a much thornier matter and address a new proposal by the Marshall Islands and the Solomon Islands to impose a $100 levy per tonne of CO2 equivalent on all ships by 2025.

The proposal by the two Pacific island nations well and truly pushes the sector beyond maritime lines — and, in some ways, is an appropriate precursor to COP26.

Two countries endangered by climate change are broaching a very uncomfortable but key tool in shipping decarbonisation, a global fuel tax, while demanding the majority of the revenues go to climate change-related purposes, not to industry projects and financing.

Shipping is the target, but the geopolitical and financial implications will not be lost on anyone.

The levy will not be endorsed or rejected by the IMO MEPC 76 in June. Yet how delegations respond will send a message as to how governments feel about the prospect — at least today — of going down a path that many in the industry deem necessary to enable energy transition.

The IMO needs to show the world that it is intent on moving in the direction of a carbon levy and commitment for a decarbonised industry by 2050, by demonstrating progress in the discussions of this proposal, according to Mr Osterkamp.

“Any industry that wants to be seen as a positive contributor to the transition will need to have something to say at COP26,” he said.

As luck would have it, the five final days of COP26 coincide with MEPC 77. Any conclusion or recommendation from the former will likely feed heavily into the discussions of the latter, where market-based measures could take centre stage.

Trafigura global head of fuel decarbonisation Rasmus Bach Nielsen believes the IMO needs to urgently discuss the carbon levy proposal. COP26 could be a big push in this direction.

“We believe the carbon levy discussion is taking higher and higher priority and that at COP26, many leaders will realise that the required action to decarbonise shipping is a global carbon levy,” he recently told Lloyd’s List.

He believes — and hopes — that as a result, at MEPC 77 a number of countries will be able to support a carbon levy.

The IMO will grab much of the maritime spotlight in Glasgow, but eyes will also be on the industry's track record.

Several cross-sector initiatives — including the Getting to Zero Coalition, which targets the commercial deployment of zero-emissions ships by 2030 — are evidence that some in the industry are working on a viable pathway.

However, more companies could be setting net zero emissions targets ahead of COP26, according to Mr Osterkamp. The COP26 climate action champions want to see companies accounting for 20% of revenues across their sectors taking the carbon neutrality pledge.

More concrete commitments are also needed on other fronts, such as from shipowners to zero-emission-ready ships and cargo owners to paying cost premiums to finance transition, as well as the development of the first zero-emission shipping routes, he added.

Seven months is still a long time for an industry whose mentality has changed radically in less than three years.

Waiting on the carbon offset boom

Is carbon capture the solution shipping has been waiting for?