Shipping is being subjected to greater sanctions compliance scrutiny and the industry needs to keep up to date with the latest intelligence, red flags and evasions tactics to effectively mitigate risk. The latest edition of Lloyd’s List’s regular risk analysis discussion panel explores how shipping can get caught out in the changing evasions landscape and the red flags raised by regulators, lawyers and insurers. 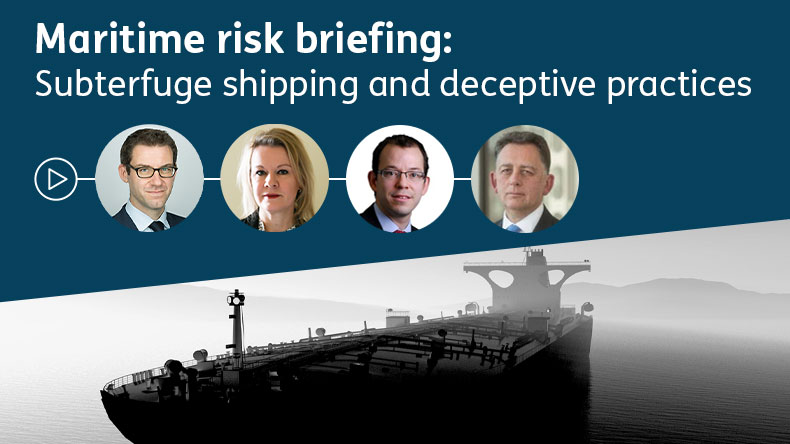 “There is a predator and prey relationship developing in shipping right now when it comes to sanctions compliance and whatever checks are being run today, there will be new measures adopted tomorrow to keep up with those evading scrutiny,” said Daniel Martin, a partner and sanctions expert at the law firm HFW.

“Owners need to keep up to date with the latest intelligence and ensure the right checks are being carried out,” he said speaking in the latest edition Lloyd’s List’s regular risk analysis expert discussion panel.

When it comes to the murkier end of shipping’s deceptive practices, there has never been a bigger target on shipping’s back.

The data-led investigation highlighted how some opaque operators go to great lengths to cover their tracks, not least through regular flag and class-hopping, ship-to-ship transfers, and deactivation of vessel-tracking systems.

Deliberate evasion of sanctions will side-line insurance, which is especially relevant in the event of any accident or oil spill, said Neil Roberts, head of marine underwriting with the Lloyd’s Market Association.

“Insurance is set up to run on rules and if people are outside the rules insurance is side-lined and is no longer part of the picture,” he said.

“All we can do is try and run our checks — the due diligence that we would normally do — when risk assessing a particular assured [policy].

What shipping has is a “sympathetic regime problem” that overlooks sanctions evasion in seaborne trades, he said, making rigorous due diligence essential.

While this deceptive trading activity is limited to a small number of rogue actors, risks remain for third-party operators, according to Lloyd’s List markets editor/analyst Michelle Wiese Bockmann, who investigated the subterfuge fleet.

“We're talking about 4.3% of the existing fleet of trading tankers over 55,000 deadweight being engaged in clandestine circumvention of US sanctions on oil exports from Iran and Venezuela,” said Ms Bockmann.

“These activities are enabled by a cast of supporting institutions which means ship operators, insurers, flags and class societies have been caught out by association simply by not asking the right questions.”

The geopolitical context of shipping’s compliance gaps is also “a moving target” that the whole industry needs to be more aware of, according to Neil Roberts, head of marine underwriting at Lloyd's Market Association.

“This is a system whereby you are criminalised if you do not trade with a country at the behest of one other,” he said.

“If the US says you can't do something, you are stuck because the EU, if you're an EU member, will take you to task and now we have the Chinese looking to combat US interventionist policies in Southeast Asia,” Mr Roberts said.

The compliance landscape is unlikely to change even if the US removes or eases sanctions on Iran or Venezuela.

“I think what we'll see change are the specific restrictions, but I think for as long as the sanctions target trade, we will see a continued focus on shipping,” said Mr Martin.

From the News Desk: Why shipping’s future requires 20/20 vision