International Group affiliates can probably eat up the worst year for the pool on record, industry sources insist. But if 2021 is as bad as the last 12 months, the strains will readily be evident, they warn

‘The last three years have been very bad for the pool... If we have another bad year next year, you’re going to see the clubs starting to really struggle’ — senior P&I executive 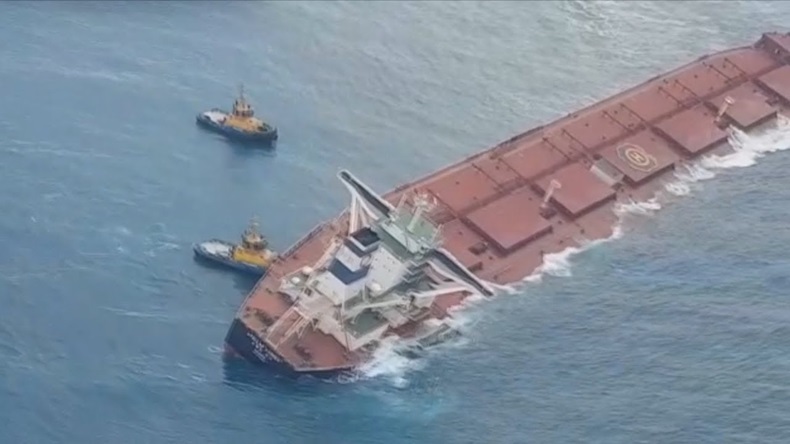 There have been 16 notified pool claims, which are by definition of $10m and above including such high-profile casualties as Wakashio, Höegh Xiamen, Stellar Banner (pictured), and the quarantined cruiseship Diamond Princess.

INTERNATIONAL Group pool claims for 2020 have already topped $450m and are almost certain to exceed the half a billion dollar barrier as the year develops, according to industry sources.

P&I clubs are also feeling the pressure from earlier claims years, which are developing adversely, they say.

While clubs will probably be able to eat up losses as things stand, if necessary by dipping into free reserves, another bad claims year in 2021 risks putting the system under intensified strain.

Even with the current picture, owners recently described by broker Aon as ‘going ballistic’ in the face of current 5%-10% P&I pricing hikes can look to at least the same again next year. On the upside, supplementary calls appear unlikely.

There is also now a real chance that ratings agency will downgrade one or more currently A-rated club, with several already on negative outlook.

While mutuals rarely borrow on capital markets, and thus not experience increased finance costs, there will be an impact on solvency and capital positions, and perhaps loss of business from owners mandated only to insure with A-rated carriers.

So far this year, there have been 16 notified pool claims, which are by definition of $10m and above. They include such high-profile casualties as Wakashio, Höegh Xiamen, Stellar Banner, and the Diamond Princess, the cruiseship quarantined in the early days of the coronavirus outbreak.

Four pool claims have yet even to be estimated. The largest hit will be from Japan Club-covered ONE Apus, the 14,000 teu boxship that suffered a massive container stack collapse en route to Long Beach last August.

After the loss of 1,900 boxes, the casualty could even prove sufficiently expensive to break into the second layer, with a payout in excess of $100m.

Meanwhile, statistics from Ferrari and Tysers indicate that earlier years are developing in a manner that will come as an unwelcome blow for clubs.

Much of that will likely prove attributable to the complex salvage work necessitated by the total loss of car carrier Golden Ray off the US state of Georgia.

The figures strengthen the picture provided in a recent financial update from IG affiliate Steamship Mutual, which specified that the nine-month figure for the current year had broken existing records, without revealing the exact amount.

Lloyd’s List reported last October that pool claims had reached around $300m at six months, with payments trebling for some P&I clubs.

More accurate figures have subsequently emerged, and the level at that point is known to have been $294m.

Under the IG’s pool scheme, clubs retain the first $10m liability for any given casualty. After that, there is a pool layer running from $10m to $100m, at which point reinsurance kicks.

The bill for pool claims is footed by the clubs themselves, under a formula weighted by loss records and other criteria, and represent significant payouts for the major clubs.

Many chief executives openly blame the pool system as the major driver of this year’s rate hikes, which run from 5% at the American Club, Shipowners, Steamship, and Swedish Club to 7.5% at West and 10% at Japan Club, London, North, Standard, the UK Club and North.

Two clubs have said they will seek additional premiums via ship-by-ship pricing, with Gard aiming between 2.5% and 5%. Britannia is seeking high single digits in terms of percentage points.

Stephen Hawke, managing director of PL Ferrari & Co, pointed out that all clubs have reported negative combined for both last year and the year to date, and are under rating agency pressure to correct that situation.

“Their budgeting is based on history, and that history has not had a year that started like this. If you take 2020, now at $450m, and even conservatively say that after 36 months, when it starts to settle down, it’s going to be $500m or more, there are possibly $200m of claims coming into the club system that haven’t been budgeted for.”

This alone would be enough to put five to ten percentage points on any given club’s combined ratio, which are already negative and under pressure from ratings agencies, making harder rates inevitable.

A senior executive at a P&I club, who asked not to be named, pointed out that pool claims figures are estimates concerning delicate situations, which clubs did not seek to publicise for fear of weakening their negotiating hand by revealing expected payouts.

But restrictions on surveyor travel on account of the pandemic may mean that the headline numbers contain a greater number of estimates than usual, and could thus move up or down.

“Some of the pool claims are very small and have just cracked into the pool. But ONE Apus has got the potential to hit the second layer of the pool, if not go right the way through it.

Pool claims and larger losses within retention are an obvious headache for most clubs, he conceded, although attritional losses are broadly as expected.

But it is writing against the prospect large losses that is difficult to do and cannot be tackled overnight.

All clubs are well capitalised and decent investment returns last year have bolstered cushions, he said.

“The numbers we’re looking at across the industry are going to be a bit of a shock. The last three years have been very bad for the pool. Is this a trend, or is this just a three-year spike? Who knows. But if we have another bad year next year, you’re going to see the clubs starting to really struggle.

He predicts that some clubs will be downgraded by ratings agencies this year, after four were recently placed on negative outlook.

Shipowners’ Club to concentrate on small craft specialism in renewal round

P&I clubs ‘set the tone’ during renewal round