This is the second reported incident about seafarers resorting to hunger strikes in protest at their conditions. The situation with abandonments seems to be getting worse, with a suicide reported 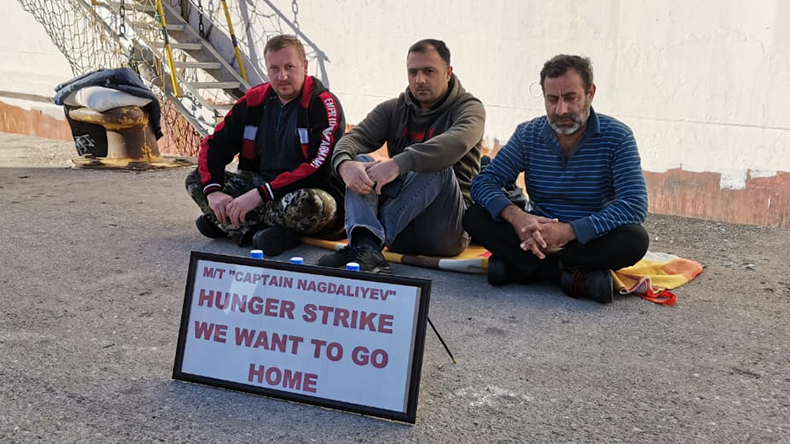 Source: Courtesy International Transport Workers’ Federation Seafarers on the vessel Captain Nagdaliyev, which was abandoned in March, have been on hunger strike for five days.

CREW on another abandoned ship have gone on hunger strike in protest about their working and living conditions, Lloyd’s List has learned.

Four seafarers from Azerbaijan on the edible oils tanker Captain Nagdaliyev (IMO: 9575307) have been on hunger strike for five days now.

The Malta-flagged vessel was reported to have been abandoned in March last year, according to the International Transport Workers’ Federation. Nine of the crew have since been repatriated.

According to Lloyd’s List Intelligence, the vessel, owned by the Palmali Group of Turkey, was arrested in Beirut, Lebanon, in May “for payment of debts”.

Some of the crew have been working on board for up to 26 months, well beyond the required limit.

The crew were informed two weeks ago that the clinker cargo would be auctioned, but nothing has happened yet, the ITF’s Arab region co-ordinator Mohamed Arrachedi told Lloyd’s List.

“It is a terrible situation, which seems to be getting worse,” he said.

Abandonment cases were at a record in the past year, reported to have been exacerbated by the coronavirus backdrop, with the Arab region notorious for such stories.

According to the ITF, there were 175 requests for assistance in the past year, with about $6.2m in wages recovered. That is higher than the year before, when 124 cases were reported, with about $4.3m retrieved.

That compares with 2018, when the group dealt with 98 cases, mostly related to abandonment, with $1.2m in back-wages obtained.

Meanwhile, another abandonment case on the asphalt tanker Sea Princess (IMO: 8607634) has resulted in the suicide of a young seafarer who had been on board for 13 months straight.

The family of the victim are urging that an investigation be carried out, along with accountability for the tragic incident, according to charity Human Rights at Sea.

The crew on the vessel, which had been flagged with the Cook Islands, have not been paid for two months, the ITF said. They lack water and fuel to keep the lights on.

According to Lloyd’s List Intelligence, the vessel is currently in anchorage in the United Arab Emirates.

It had reportedly been travelling from Sharjah in the United Arab Emirates to be scrapped at Alang in India when the incident occurred.