A Lloyd’s List and Lloyd’s List Intelligence special investigation uncovers the subterfuge tanker fleet that has evolved to ply sanctioned Iranian and Venezuelan oil trades, and the risks and challenges this provides for shipowners worldwide 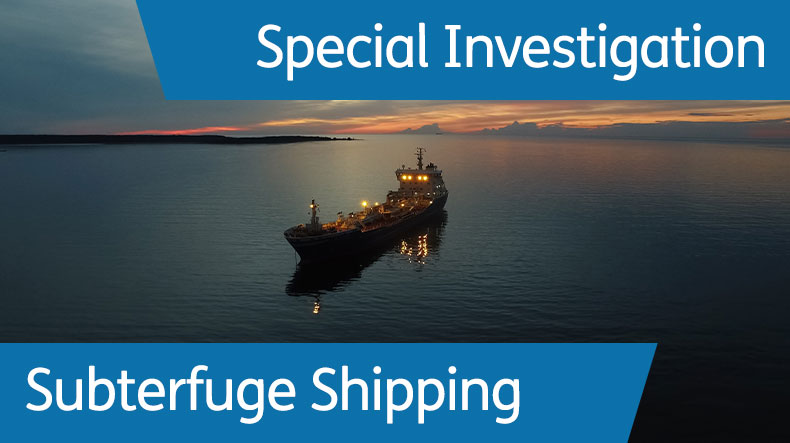 Despite this unusual ownership pattern, the Cameroon-flagged vessel maintained one technical manager after the sale, a Seychelles-based entity named Berylicious Ltd for which scant details are recorded.

As well as these red flags, the ship’s P&I coverage and class were both withdrawn last October. Replacement marine service providers for both are not listed on any shipping databases.

Not only is Aurora plying international trades to ship sanctioned crude in some of the busiest waterways, but also there are a further 64 similar vessels all engaging in the same unsafe practices. These vessels collectively carry billions of dollars’ worth of oil and operate outside of the established international framework of maritime regulation with no real accountability in the event of an environmental or safety disaster.

Welcome to the world of subterfuge shipping, a shady place that has evolved over the past two years, inhabited by a fleet of elderly tankers keeping oil and refined products flowing to and from Venezuela and Iran.

Despite unilateral US sanctions, most of the tankers have so far evaded any penalty from US regulators even though research shows they have engaged in a range of shipping practices that the country’s administration has identified as deceptive and evasive.

Only a handful of vessels show direct links to companies, people or vessels that have been blacklisted by the US Office of Foreign Assets Control since sanctions were imposed on Iran and Venezuela’s oil and shipping businesses more than two years ago.

The 65 tankers have been revealed during a Lloyd’s List investigation into subterfuge shipping and are among some 150 ships that vessel-tracking shows have carried oil from Venezuela or Iran in the last 12 months.

This is done either via ship-to-ship transfer at locations worldwide or by lifting directly from ports in those countries.

None of the subterfuge fleet are flagged in Iran or Venezuela and most lack clear or obvious links to these countries.

The tankers were purchased during 2019 and 2020 by a number of disparate, anonymous owners and immediately deployed on trades carrying sanctioned crude.

The average age of the 65 tankers for which P&I coverage is not listed is 19 years, data show.

They have little in common except the anonymous and complex patterns of flag registration, ownership and shipmanagement.

Of the 150, 65 are no longer entered with the 13 P&I Clubs that are members of the International Group, which covers 90% of the global fleet.

This leaves their insurance status uncertain, even as the tankers are regularly calling at offshore anchorages in Iraq, Fujairah, Singapore, Malaysia and Indonesia, and ports in China.

As with Aurora, class societies have withdrawn services for a dozen or so of these vessels for which the insurance status is uncertain over the past 12 to 18 months. But unlike P&I clubs, many of the biggest names have continued providing class.

There is no suggestion that any of these class societies are breaching US sanctions.

The shipping structures not only exploit the typical regulatory loopholes, but also have risen in complexity and volume over the last nine months. At least four tankers are linked to fraudulent registries, raising insurance implications for the ports and anchorages at which they are calling.

The very large crude carriers Elva (IMO: 9196644) and Dazzle (IMO: 9203277) have reported their flag registry as Samoa. The Pacific nation does not have an international registry, and companies have been noted offering registration without authorisation from Samoa, according to the International Maritime Organization.

The sanctions-busting tactics deployed by Iranian and Chinese-linked vessels during 2019 and 2020 have been copied and extended to Venezuelan flows in the last 14 months.

This accelerated last year after the US sanctioned six Greek tankers linked to four prominent Athens and Piraeus families.

Until then Greek-owned tankers dominated, and were chartered to lift about 80% of Venezuelan crude. Owners’ decisions to withdraw from the trade lane after the sanctions scare resulted in subterfuge tankers stepping in to fill the gap, using many of the same tactics borrowed from the Iranians to disguise the origin and destination of cargoes.

These include switching off Automatic Identification System transponders for the majority or entirety of the ballast and laden voyage sectors and loading ports, as well as multiple ship-to-ship transfers, forged bills of lading and fake loading lists.

In past months photos have emerged of at least two VLCCs roughly painting over their vessel’s name at Jose Terminal, Venezuela, to avoid media scrutiny while they load.

The most recent ship implicated was the VLCC Calliop (IMO: 9248485). It has had two different beneficial owners recorded since September, including one for 24 days, when it was previously known as Calliope.

The tanker goes dark while an STS is undertaken at the offshore anchorage with “Iraqi origin” oil from a tanker carrying Iranian crude.

In other cases, the vessel’s signal is missing for three days at the Iraqi anchorage while it secretly sails for Iran to load, and then returns back to Iraqi waters to resume transmitting signals and onward voyage.

Ship agents’ arrival lists in Iraq reveal these tankers are not scheduled to receive any Iraqi cargoes, underscoring the AIS deception.

Other vessels in the subterfuge fleet can be tracked to transhipment and storage hubs at Fujairah, the Sunnai Linggi anchorage off Malaysia, as well as West Africa off Lomé, Togo.

They are deployed for cargo transfer to other vessels as part of a shipping logistics chain that can involve as many as three different vessels, shuttling two and from the STS hubs.

Refineries in China and Syria are the major destinations.

Before sanctions were reimposed by the US, Iranian exports regularly exceeded 2m barrels per day.

December and November volumes were tracked at 480,000 bpd on some 30 voyages monthly, according to Lloyd’s List Intelligence data. This figure does not fully account for subterfuge fleet activities.

Aurora was one of the estimated 23 tankers that loaded crude from Venezuela last month, vessel-tracking data show.

After its AIS signal stopped at the Strait of Gibraltar on September 23, it re-emerged on January 1 off Curaçao, a popular STS loading area used by national Venezuelan oil company PDVSA. The four-month gap remains unexplained.

The tanker’s intermittent signals show it is now traversing the Cape of Good Hope and sailing behind another Cameroon-flagged, Berylicious Ltd-managed tanker, Tsar Vladimir (IMO: 9213313).

This aframax tanker also appears to have loaded around Venezuela, although the vessel-tracking shows it in the Trinidad and Tobago area with missing AIS signals for 10 days from the Strait of Gibraltar, and then 12 days after arriving near the Caribbean islands. This is a common tactic to obfuscate the actual loading location.

Berylicious Ltd has technical and ISM management of three aframaxes all flagged with Cameroon, with single-entity Marshall Islands registered ownership companies. Like the other two tankers, Orion’s (IMO: 9131357) P&I provider and coverage has been withdrawn since October and is now unknown.

Next: Flagged for convenience: the role of registries in subterfuge shipping. Our special report using Lloyd’s List Intelligence data uncovers the most popular flags for keeping Iran and Veneuzelan crude flowing.

Not a subscriber? Read the rest of this exclusive series and find out how Lloyd’s List can help you and your company stay informed with expert analysis of the key issues shaping shipping. Request a demonstration here.