Industry anger grows as reports of charterers’ unwillingness to share responsibility in crew change crisis are raised within cross-agency briefings. Charterers deny blocking fixtures, saying they support seafarer wellbeing programmes and are collaborating with the industry 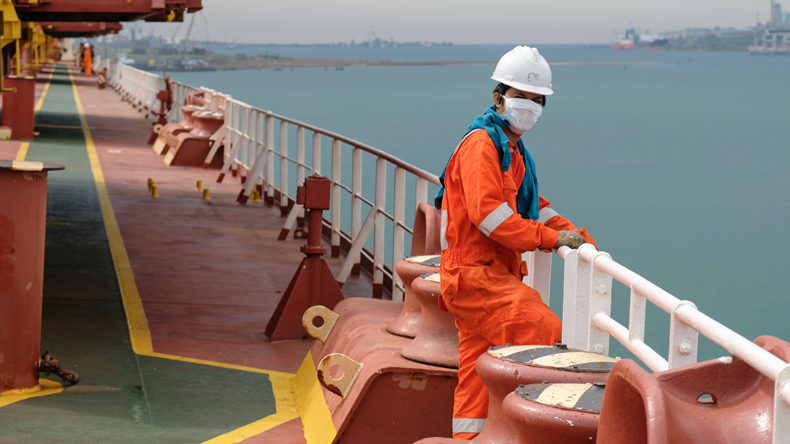 CHARTERERS are refusing to fix ships with imminent crew-change requirements or demanding that crew changes are postponed in order to avoid costly disruption to voyages.

The trend, confirmed by several shipowners, brokers and senior industry sources, has been exacerbated in recent weeks by the emergence of new strains of coronavirus, rapidly changing port requirements and widespread concerns from both charterers and shipowners that seafarer vaccination requirements will create supply chain logjams and long delays for ships.

Industry officials now fear that charterers’ attempts to avoid additional costs will worsen the crew-change crisis, now in its 11th month, just as industry collaboration was beginning to ease some of the pressure on crew.

“We are seeing increasing instances of some charterers wanting to know before fixing if we are planning to do a crew change during the voyage or when the last crew change was done,” the chief executive of one major shipowner told Lloyd’s List. “In the case of one ship we have on a short time charter, the charterers are asking us to delay crew change until the time charter is over,” he continued.

While shipowners have been complaining about such cases for several months, the problem has reached crisis point for several owners in the dry bulk sector, where charterers are now routinely insisting on “no crew change” commitments from owners before a fixture is confirmed.

“They are not necessarily putting no crew changes in writing, but they are saying it more subtly,” said one senior chartering broker with many years of experience in the dry cargo market. “They just won’t fix you. There is no humanity among the charterers, no exceptions.

“No matter what [the large dry bulk charterers] say, nobody cares. In fact, often it is the big boys who insist on some of the worst clauses. Nobody, but nobody, is showing any respect for the seafarer.”

According to the well-connected broker, “there is not a single company amongst the chartering fraternity that stands out for its humanitarian efforts in this respect.

“A straw-poll of over 100 owners and operators has yet to yield one name to add to the list of sensitive charterers,” he said. “A sad indictment.”

Lloyd’s List approached several major charterers for comment and most declined to respond directly to questions of fixtures being declined.

One of the few to respond directly was Rashpal Bhatti, BHP’s vice-president for maritime and supply chain excellence.

“There is absolutely no truth in vessels not being fixed if they have crew whose contracts are expired and need to be changed,” he said in an interview. “BHP is very concerned about seafarers’ wellbeing, specifically as it applies to restrictions imposed by many jurisdictions globally in [not] allowing seafarers to recrew at their ports, for the fear of infection.”

“Vessel owners, technical managers and charterers have come together to find solutions so that no vessel in the BHP supply chain breaches the 11 months Maritime Labour Convention. BHP works very closely with each of its strategic partners to ensure seafarer rights are not only met but also surpassed.”

Rio Tinto said in a statement that it aims “to support the shipping industry and the human rights of the seafarers on which it depends”.

It added: “This requires collaboration between ship owners, who employ the seafarers, charterers and regional port authorities around transparency of information and flexibility on schedule which facilitates the safe rotation of crews within the 12-month period and as per the guidelines endorsed by the IMO.”

Off the record, however, several chartering sources conceded that they were aware other charterers had been deliberately avoiding vessels that had not changed crew recently and acknowledged that the situation had recently been exacerbated by the new virus strains and rapid changes to port restrictions.

One official working with a major charterer speaking to Lloyd’s List on condition of anonymity pointed out that shippers and receivers were also adding pressure to avoid crew change disruptions, adding that “nobody wants to idle time at ports”.

Grant Hunter, head of contracts and clauses at industry association BIMCO, said reluctance from some charterers to engage vessels that were increasingly likely to be subject to lengthy crew-change delays was understandable in some cases given the short time period of some charterers and existing contractual obligations from the charterers to deliver goods within a specific timeframe.

“I can understand the tension here — from a charterers’ perspective contractually speaking crew changes have never been their obligation — it’s an operational matter... And now the charterer is being told if they don’t contribute [to costs] and accept long delays they are the bad guys,” he said.

“It’s not universal — there are good charterers out there, but this is now a serious concern for everyone in these meetings,” said International Chamber of Shipping secretary-general Guy Platten. “This crisis can only be solved by everyone working in partnership, but many of the charterers don’t seem to be following the spirit of the agreements we had discussed.”

Later this month the Global Maritime Forum, which includes many of the world’s largest charterers as members, will formally unveil the Neptune Declaration, which is intended to facilitate crew changeovers just as coronavirus restrictions are globally tightening again.

One of the key aims of the declaration, which will be signed by several major charterers as well as most major industry bodies, is to increase collaboration between shipowner and charterers in facilitating crew changes.

“The Neptune Declaration is great, but we need all parties to live up to the spirit of the declaration and work together,” said Mr Platten.

“Are we really arguing in the second year of Covid that contract is more important than morality?” said Stephen Cotton, general secretary of the International Transport Workers’ Federation.

“This behaviour is unacceptable,” he added. “The charterers need to meet the owners halfway or the seafarers will continue to suffer as a result of their lack of consideration.”