Abandonment of seafarers is on the rise this year, exacerbated by the pandemic, with reported cases at a record high of more than double the 2019 levels

This year, 76 cases have been recorded, involving more than 1,000 seafarers, data shows. The greatest number of abandonment cases have been reported in the Middle East and Asia, while Italy has also been a hot spot 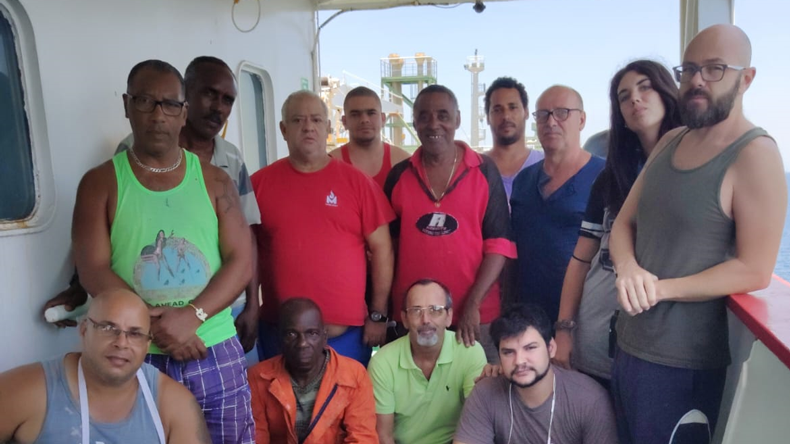 The crew of the LPG carrier Celanova (pictured) were finally paid in July after being stranded for four months off the Philippines.

CASES of seafarer abandonment are at a record high, exacerbated by the coronavirus pandemic.

Of the 76 cases, only 18 have been resolved. About 17 of the cases were related to the impact of Covid-19, further hampering the crew-change situation for seafarers, the IMO said.

In early November, there were 62 cases, involving 811 seafarers of varying nationalities. In addition, 243 seafarers were on a cruiseship that had been abandoned.

Last year, there were 40 cases, involving 474 abandoned seafarers. Only 10 cases were resolved, allowing 123 seafarers to be repatriated with full pay, while 97 were repatriated without wages or paid only in part. As many as 254 individual seafarer cases remain unresolved.

Since 2017, when 55 cases were reported and catalogued, abandonment has been on the decline, until now.

“Abandonment is an insidious and ongoing issue in the sector, trapping crew in unacceptable conditions on board, leading to loss of income and in some cases, resulting in indentured servitude,” said Human Rights at Sea founder David Hammond.

“This is a reflection of market conditions and often tight business margins which can place owners into debt and needing to offload liabilities.”

He described 2020 as a “seminal year for finally embedding the issue of the protection of seafarers' fundamental human rights, not just labour rights” into the maritime industry’s awareness.

“This has been the core of our work for the past seven years and we are relieved to see the emerging realisation that human rights apply at sea, as they do on land,” he said. “Amongst other issues raised by the pandemic, abandonment needs to be consistently addressed by flag, coastal and port states and not simply reported against, but swiftly acted upon.”

A report by Human Rights at Sea cited India and the United Arab Emirates as being of particular, pressing concern.

According to the ILO/IMO database, the UAE has the worst record for abandonment cases, potentially linked to the fact that it has not ratified the Maritime Labour Convention. China, Taiwan, Turkey and Italy were next.

Liberia, Malta and Panama were the flag states with the most cases, the data showed. Several of the cases have been resolved, however.

“We continue to work with the ILO, member states and industry and trade union partners to try to resolve these cases, based on our collective responsibility and human duty,” the IMO said in a statement marking the United Nations’ Human Rights Day on December 10. “While the causes of abandonment are many, they all have a dramatic human impact that must be addressed.”

In 2006, the ILO adopted the Maritime Labour Convention, widely known as the “seafarers’ bill of rights”. It has been ratified by at least 97 member states.

The original MLC did not make provision for financial security in the case of abandonment. Guidelines for liability and compensation were actually adopted in 2001 but only incorporated in revisions made in 2014, with entry into force three years later. It requires shipowners to have compulsory insurance to cover abandonment of seafarers, as well as claims for death or long-term disability.

In addition, guidance for Port State Control and Flag States needs to be updated, and will be discussed at the Sub-Committee on Implementation of IMO Instruments to be held in July, he said, adding that there also needs to be a more generic requirement for the standard of insurers under the MLC.

The practice that “some companies are using registries in non-MLC jurisdictions for substandard business.” also needs to be addressed, he said, adding that while the work needed is “ambitious, it is realistic.”.

A case of abandonment occurs when the shipowner fails to fulfil certain fundamental obligations to the seafarer, among other things, relating to timely repatriation or payment of outstanding remuneration or to the provision of basic necessities of life, such as adequate food, accommodation, and medical care. Abandonment will have occurred when the master of a ship has been left without any financial means in respect of ship operations.

The total number of cases that have been recorded in the ILO/IMO database since it was launched in 2004 reached 438, involving 5,767 seafarers, using data as of August 2020. Some cases took more than 32 months to resolve.

In one instance, a ship in Haiti has been sitting at port unresolved for five years, Mr de Boer said. The rudder is not working, putting the safety of the vessel and its 11 crew members at risk.

In other instances, vessels in Djibouti, one with a Greek owner who went bankrupt, had very ill crew on board who needed medical attention. Eventually the International Red Cross had to be called in to assist following failed attempts at repatriation.