Ahead of publication on December 11 of the Lloyd’s List One Hundred People 2020, ranking the most influential people in shipping, we assess the movers and shakers in the container port sector

PSA’s Peter Voser tops our regular rankings rundown of the global port operators. The Singaporean port operator stands head and shoulders above its competitors on an equity teu basis 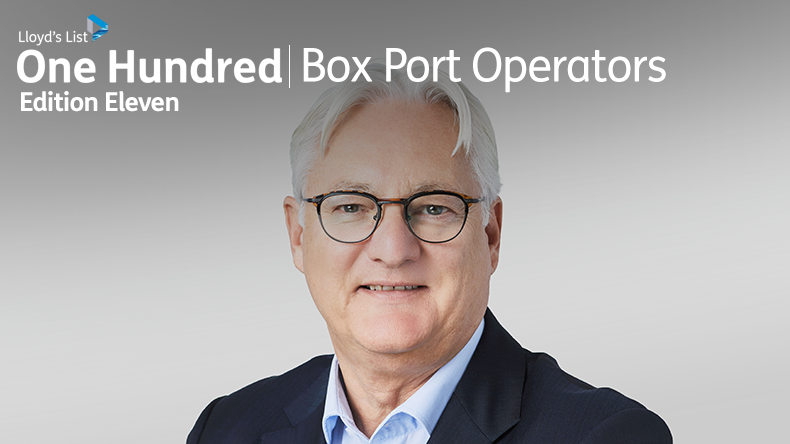 PSA’s Peter Voser retains his crown at the top of the terminal operator league in 2020, as chief executive of the Singaporean juggernaut.

On an equity teu basis, the group stands head and shoulders above its competitors, thanks largely to its flagship domestic operation in Singapore, representing the lion’s share of its throughput tally.

This tally will be extended with the opening of the much-anticipated Tuas Port, where PSA will shift its home container business to a series of next-generation terminals.

PSA broke ground on the second of four development phases at Tuas last year, which, when completed come 2040, will be the world’s largest fully automated facility, while doubling Singapore’s annual box capacity to an eyewatering 65m teu.

However, PSA boasts an impressive international portfolio overseas, too. The group has 60 terminals to its name across 26 countries, spanning four continents.

Feng Boming has just completed his first full year of tenure as the head honcho of Chinese conglomerate Cosco Shipping’s port arm, following the departure of his predecessor Zhang Wei, who has since moved upstairs as part of a management reshuffle.

The rankings jump came off the back of notably strong performances at CS Ports Mediterranean jewel in Piraeus, Greece and its new Middle Eastern facility in Abu Dhabi.

CS Ports, like its rivals, has not been immune to the pandemic, which has put a significant dent in its business in 2020.

Nevertheless, the port operator is adamant that this setback will not deter its expansion strategy.

Armed with significant capital, CS Ports is looking to exploit the situation, declaring recently it will “keep a close eye” on the declining value of global terminal assets, homing in on regions such as Southeast Asia, the Middle East and Africa, if the opportunity should arise.

APM Terminals climbs two places in the operator equity stakes after reporting a steady rise in associated traffic during 2019.

Morten Engelstoft is now into the fourth year of his tenure as chief executive of Maersk’s port arm, in which role he has overseen its integration into the larger group as an all-encompassing transport and logistics company.

This vertical integration has also been met with the rationalisation of APMT’s assets while expansion takes a pause, as the company works towards fitting existing facilities into the Maersk group’s wider end-to-end logistics mantra.

APMT’s European network of terminals have notably come under the spotlight, with the group selling stakes in its facility in Zeebrugge, Belgium, and Turkey’s Izmir Aliağa Terminal.

More recently, the group signed a letter of intent with Hutchison Ports for the sale of its Maasvlakte I terminal in Rotterdam. The move to relinquish its underperforming assets has already helped APMT to improve terminal revenues per teu.

For now, the focus for APMT is to fulfil its role in the wider group’s strategy as the crucial supply chain link between land and sea.

Yet with substantial volumes — buoyed by the sure-fire business of the world’s largest carrier Maersk Line — and facilities in all key global markets, its status as a standalone port operator remains.

Eric Ip has been at the helm of Hong Kong-based Hutchison Port Holdings for more than two decades — or nearly half of the port operator’s existence. HPH celebrated its 50th anniversary last year.

The group, which can lay claim to be the original global port operator — having become the first to venture overseas when it acquired Felixstowe in 1991 — recently became the first to achieve a cumulative global throughput of 1.3bn teu.

HPH has though slipped down the rankings on the equity teu count after volumes fell back slightly in 2019.

However, HPH stands to gain significantly from several astute investments, including in Myanmar and Thailand.

The company’s knack for gaining a strong foothold and as first-movers in developing markets has been integral to its success and is a reason why the group is still going strong after more than half of a century in the business.

DP World slips down a place in our annual rankings, with equity-based volumes relatively unchanged in 2019 at just over 43m teu.

Under the stewardship of chairman and chief executive Sultan Ahmed Bin Sulayem, the Dubai-based operator has steadily added to its portfolio of marine and inland container terminals, which now amounts to more than 80 in number.

However, the group has also looked to diversify the business to remain competitive in the port game. Unlike its counterparts, DP World does not have the luxury of a carrier arm to guarantee volumes.

The focus has centred round integrated supply chain solutions as it embarks on its journey to become a self-coined ‘global trade enabler’.

DP World has made inroads into several verticals predominately in the logistics space, but also in shortsea, the automotive, oil and gas, and fast-moving consumer goods industries.

CM Ports has a presence in just over 40 ports globally off the back of rapid expansion in the past decade, spurred largely by China’s One Belt, One Road initiative, which has seen the group invest heavily in new port and terminal infrastructure.

The port operator remains at number six in our rankings. However, CM Ports is expected to climb further in 2021, with the promise of significant additional volumes related to its $1bn terminal arrangement with CMA CGM.

In 2019, CM Ports agreed a deal with CMA CGM to transfer stakes in 10 terminals it owned directly to its 51%-owned joint venture Terminal Link, in which the Chinese port operator holds the other 49% share.

At the time of writing, transactions for eight terminals had been completed, while the remaining two, in India and Vietnam, were expected to be closed by the end of 2020.

Ammar Kanaan is into his third year as chief executive of Mediterranean Shipping Co’s port arm Terminal Investment Ltd, which celebrated its 20th anniversary in 2020.

Set up initially to provide berthing space for MSC’s rapidly expanding box fleet at the turn of the century, TIL has since become a major global player, with terminals across the world.

Today, the port operator has a portfolio of more than 50 container facilities and ranks among the world’s top terminal investors.

TIL’s most recent ventures include its 30-year concession with Abu Dhabi Ports to create a hub for MSC’s transhipment activity in the Middle East Gulf at the Khalifa Port Container Terminal; and in Valencia, Spain, where it has put its name against a $1.1bn expansion of the port.

Yet as TIL began its third decade of existence, Mr Kanaan will no longer be joined at the top of the organisation by the president of MSC’s terminal business, Alistair Baillie. Mr Baillie stepped down from his post at the beginning of 2020. MSC group president Diego Aponte remains as TIL chairman.

The Philippines port operator targets governments and local authorities looking to divest their port assets through privatisation or sale. ICTSI then looks to form partnerships with local companies, with a preference for a controlling share in a joint venture terminal.

This strategy continues to serve the port operator well. Today, ICTSI’s terminals — the majority adorned with its unmistakable orange cranes — have grown from its initial Manila base in the late-1980s to as many as 31 in number, spanning four continents.

CMA CGM enters the top 10 box port rankings at the expense of Evergreen, which fell just short of this year’s list.

Laurent Martens is now in charge of the French company’s terminals portfolio, following the departure of CMA CGM stalwart Nicolas Sartini — seen as a loyal member of the group’s tight inner circle — who recently left the Marseille-based company after more than three decades of association.

CMA CGM has remained tight-lipped about why Mr Sartini quit after just a few months running the ports division, doing little to quash rumours of a fallout with group chief executive Rodolphe Saadé.

Despite management upheavals, CMA CGM’s terminal operation continues to go from strength to strength, benefiting not least from its affiliation with the world’s third-largest carrier and its subsequent Ocean Alliance tie-up, but also continued expansion in port ventures.

CMA CGM also has the benefit of Robert Yildirim as shareholder and whose business interests include terminal operator Yilport.

Terminal Link, Yilport and China Merchants are all shareholders in Malta Freeport Terminals, the transhipment hub in Marsaxlokk. Yilport also narrowly missed making our top 10 in its own right on 2019’s volume figures, ranking 12th behind only Evergreen.

Perhaps the most eye-catching deal over the past 12 months was seen in Le Havre, where the group’s domestic operation and long ties with the port looks set to extend for many years.

SSA Marine clung on to its top 10 rankings position this year, handling only a few thousand more teus than the departing Evergreen.

Knud Stubkjær heads up the Seattle-based port operator, as the group’s chief executive.

The former Maersk man, who was with the Danish shipping giant for more than 30 years — including a stint as head of Maersk Container Business — joined the company in 2012, when he upped sticks from Hamburg as chief executive of containership owner ER Schiffahrt.

SSA Marine’s core group of terminals are located in North America, where it has footholds on the US west coast, including in Oakland, Seattle and Long Beach; and on the US east and US Gulf coast, namely Jacksonville, Charleston and Savannah.

However, the port operator — part of the Carrix Enterprise, a transport and logistics major — is a true global player with facilities in Central and South America, Europe, Africa, Asia and Oceania.

Lloyd’s List’s Top 10 for the various shipping sectors will be published daily in the lead-up to One Hundred People 2020 — our annual ranking of the industry’s most influential players, which will be revealed on Friday December 11.