As the European Commission prepares for its revision of the EU carbon market with shipping in it, two of the Europe’s biggest companies make their claim for a less international and more lenient system, taking into consideration the industry’s peculiarities 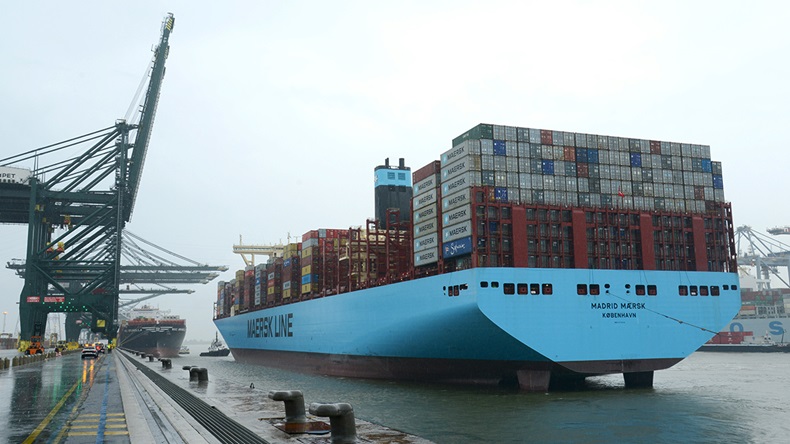 Source: Port of Antwerp Maersk and CMA CGM have both committed to net zero emissions by 2050.

MAERSK and CMA CGM have called on the European Commission to give shipping companies free emissions allowances when the sector comes under the bloc’s carbon market.

Their appeals come as the commission prepares for an impact assessment ahead of its plans to propose a revision of the Emissions Trading System, the European Union’s cap and trade emissions regime scheduled for mid-2021.

The commission has said it intends to include the maritime sector in the revised Emissions Trading System and the move is supported by the European Parliament, which has already tabled its own legislative proposal on the subject as part of a wider revision in the EU’s data collection system, the Monitoring, Reporting and Verification system.

Maersk and CMA CGM are looking to secure concessions that would make the ETS rules for shipping less stringent than European lawmakers and environmental groups want them to be, but which would still be more than what many in the industry want, which is for the EU not to impose any emission regulations on shipping at all.

Japan and South Korea have urged the commission to reverse course and ditch its plan and the International Maritime Organization has also warned against the move.

Maersk and CMA CGM, which have pledged net zero emissions from their operations by 2050, called on the commission to allocate free emissions allowances to shipping companies bound to the ETS based on some kind of benchmarking criteria that would reward more efficient fleets.

The commission has said that its impact assessment will consider “carbon leakage provisions, such as free allocation rules and updating emission benchmarks, coherence with a potential carbon border adjustment mechanism, and indirect cost compensation”.

Most of aviation’s EU emission allowances are currently allocated to companies without cost, but the commission will be reducing the share of free allowances for the industry over the coming years.

Maersk insisted that free allowances should not be given based on historical performance and argued that they should be allocated to operators based on the performance of their entire fleet rather than on an individual ship basis.

“This would enable fleet optimisation, which allows shipowners to prioritise the most cost-effective emissions reduction investments and incentivize the largest extent of green investments,” Maersk said.

The European Parliament’s ETS proposal does not support any free allowances for shipping.

CMA CGM warned full auctioning of allowances would raise costs for the industry.

“Should the European Commission decide to aim for this target, it should consider a phase-in period over which full responsibility would be gradually introduced. Companies could initially only surrender allowances for a portion of their emissions which could gradually rise to 100%,” CMA CGM said.

CMA CGM and Maersk also told the commission the ETS should only cover voyages within the EU and the European Economic Area, citing familiar concerns around the negative impact on trade and potential unilateral responses from other regions if international voyages are covered as well.

The European Commission has said that it will consider “including at least intra-EU emissions of the maritime sector” into the ETS.

CMA CGM was emphatical, saying it “should be clearly limited to intra EU CO2 emissions” while Maersk left some room for amendments in the future with its stance.

“AP Moller-Maersk strongly urges the European Commission to consider this fact and initially not consider any measure going beyond intra-EEA scope,” the company said in its submission.

“Considering that shipping is a hard-abate sector, where very few low-carbon options are available today a semi-open system would be the most appropriate, where shipping could purchase allowances from other industries (excepting aviation),” Maersk said.

Both companies also argued that the revenues from the ETS should be diverted to maritime decarbonisation research and development activities.

CMA CGM in particular also opposed the extension of the ETS to non-CO2 greenhouse gas pollutants.

“An extension to cover all GHG emissions would alter only marginally the total emissions’ volumes but would result in administrative burden, increased and disproportionate costs and less efficiency,” the company said.

CMA CGM is a vocal supporter of and investor in liquefied natural gas as a shipping fuel, which generates lower CO2 emissions higher methane emissions, a problem that has aroused suspicion on the fuel’s sustainability prospects.

A crucial question for the EU measures on shipping will be who will be paying for them.

The EU MRV currently defines the responsible company “as the shipowner or any other organisation or person, such as the manager or the bareboat charterer, which has assumed the responsibility for the operation of the ship from the shipowner”.

The European Parliament's MRV amendment proposal effectively puts the onus of reporting emissions on charterers and operators rather than shipowners, as it claims the responsible entity should be the one handling commercial operations and paying for the fuels.

For major carriers with heavy dependence on chartered-in ships, the European Parliament’s proposal and its application in the ETS could prove costly. The World Shipping Council, the biggest container line shipping lobby, has rejected the parliament’s proposal. It would hinder owners’ incentives to have efficient ships, the WSC warns, and put an administrative burden on the several companies that could charter a single ship within a year.

CMA CGM claimed in its submission that shipowners have direct control over the technical factors that determine emissions and are better positioned to make substantial improvements to the ship’s energy efficiency, such as vessel design and retrofitting.

“Charterers, on the other hand, have a limited number of options (operational measures, fuel consumption) to reduce GHG emissions. Consequently, in order to reduce uncertainty, the European Commission should clearly define each entity’s obligations under the EU ETS,” the company said.

Maersk agreed that a clear definition of the responsible entity will be crucial for the enforcement of the ETS.

“EU action in the field should be aligned with the current definition of responsible entity in the MRV-regulation,” Maersk said in its submission.