The 228 m, Liberian-registered oil tanker Nave Andromeda was carrying oil from Nigeria to the port of Southampton when it was subjected to a suspected hijacking by stowaways off the coast of the Isle of Wight on the South Coast of the British Isles

Greece-based Navios Tanker Management thanks the UK authorities for their response and praises ship staff for remaining calm through their ordeal. The vessel Nave Andromeda presently sits in Southampton port 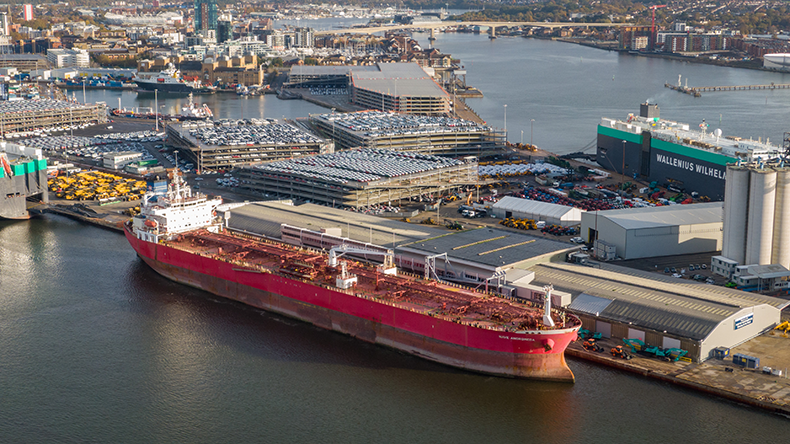 Source: Finnbarr Webster / Getty Images The vessel Nave Andromeda in the port of Southampton on October 26

THE operator of a tanker at the centre of a security operation involving British special forces has thanked the UK authorities for their response.

On October 25, the master of the Greek-operated vessel Nave Andromeda raised the alarm in connection with a group of stowaways on the vessel.

The ship was near the Isle of Wight, off southern England, when he said he was concerned about the safety of his crew.

UK armed forces were authorised by the UK government to board the ship “to safeguard life and secure a ship that was subject to suspected hijacking.”

Seven people, believed to be from Nigeria, were arrested and are being held by police.

Navios Tanker Management said the UK authorities had been advised by the master that stowaways had been found on board and that he was concerned for the safety of the 22 crew due to their “increasingly hostile behaviour”.

“Happily, no crew members were injured and all are safe and well,” the Athens-based company said on October 26. “Navios Tanker Management wishes to thank all the UK authorities involved in this operation for their timely and professional response.

“Navios would also like to pay tribute to the master of the Nave Andromeda for his exemplary response and calmness and to all the crew for their fortitude in a difficult situation.”

The vessel Nave Andromeda is currently docked at the the port of Southampton. A port official declined to comment on the case.

Local police said seven men have been arrested on suspicion of seizing or exercising control of a ship by use of threats or force.

There are no guidelines for crew to deal with unauthorised persons who have boarded a ship, so the incident at the weekend off the UK southern coast involving stowaways on a product tanker ‘raises more questions for which answers have yet to emerge’

“They all remain in custody at police stations,” a police statement said.

The UK Maritime Coast Guard Agency said that all enquiries about the vessel should be directed to the local police.

Lloyd's List understands that the vessel may have tried to disembark the stowaways at a French port in the days leading up to the incident, but the request was rejected by French authorities.

Lloyd's List Intelligence shows circling offshore Nantes between October 20 and October 21, before heading towards the UK.

A spokesperson for the port of Nantes-Saint Nazaire did not immediately respond to a request for comment.