Despite earlier media speculation that the Nave Andromeda had been hijacked, the vessel’s operator Navios Tanker Management confirmed the product tanker was under the master’s control. Seven Nigerian men are now in police custody 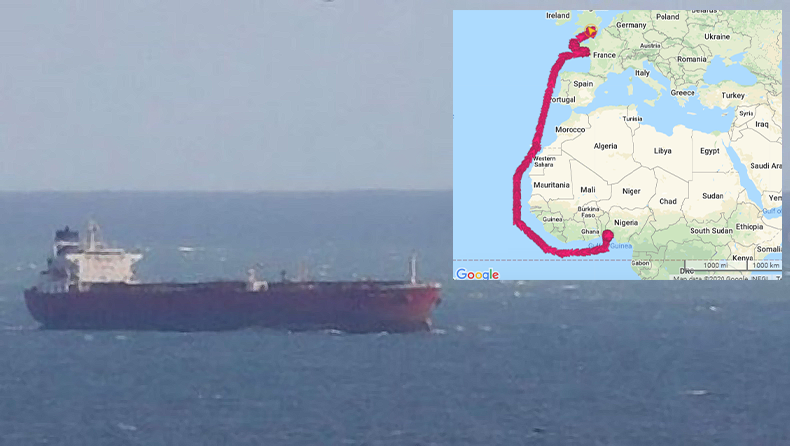 Lloyd's List Intelligence data confirms that the vessel left Lagos on October 6, where the stowaways are thought to have boarded.

SEVEN stowaways at the centre of a security incident on board the Liberia-flagged product tanker Nave Andromeda were arrested on Sunday evening after UK special forces were deployed to resolve the situation.

Local police had earlier requested military assistance after the vessel’s master had ordered crew into the vessel’s citadel when the seven Nigerian stowaways threatened them.

Troops from the Special Boat Service, a navy special forces unit whose headquarters are just a few miles away from where the vessel began showing signs of distress, boarded Nave Andromeda near the Isle of Wight off southern England after dark on Sunday evening.

Defence Secretary Ben Wallace and Home Secretary Priti Patel authorised the armed forces to board the ship “to safeguard life and secure a ship that was subject to suspected hijacking”, the defence ministry said.

Despite earlier media speculation that the vessel had been hijacked, the vessel’s operators Navios Tanker Management confirmed that Nave Andromeda had been under the master’s control.

Nave Andromeda docked in Southampton in the early hours of Monday morning.

Seven stowaways, understood to have boarded the vessel in Lagos, Nigeria became agitated towards the end of the voyage and wanted to leave the vessel. Tension flared when crew tried to lock the stowaways in a cabin, having informed them that the ship would be following protocol and informing UK authorities.

The master put the entire crew into the vessel’s citadel as a precaution.

A statement issued by Navios Tanker Management on Sunday confirmed that “the UK authorities were advised by the master that seven stowaways had been found on board when the vessel was on passage from Lagos, Nigeria. The master became concerned at the behaviour of the stowaways and requested that the authorities intervene”.

A police statement earlier on Sunday evening had confirmed that they received a report earlier this morning about “concerns for the safety” of the crew. Reportedly “verbal threats” had been made but the police say no-one has been reported as injured.

UK home secretary Priti Patel said via Twitter: “Tonight we are thankful for the quick and decisive action of our police and armed forces who were able to bring this situation under control, guaranteeing the safety of all those on board.”

Bob Sanguinetti, chief executive of the UK Chamber of Shipping, said: “We commend the swift action taken by UK personnel to secure the vessel and most importantly the safety of the crew.”

A three-mile exclusion zone was put in place around the tanker, which had been holding its position since early on Sunday morning, moving in circles at slow speed.

Nave Andromeda was originally due to dock in Southampton on Sunday morning, having departed Nigeria on October 6. The vessel had made two stops en route via the Canary Islands Las Palmas anchorage and a brief period waiting off the French coast just south of Saint Nazaire five days ago.

Officials have still not confirmed the point at which the stowaways were discovered on the voyage. However, it is understood that crew had been aware of the stowaways on board for some time.

The stowaways had no documentation when they were discovered by the crew.

An earlier version of this report stated that the vessel was managed by Inchcape Shipping Services — that is not the case.