Trade and national security are looking like increasingly uneasy bedfellows right now. Shipowners should be employing political pundits and security analysts as a priority over regular market reports the way this year is shaping up

Souring relations between China and Australia could be behind the decision to shun shipments of coal — if it is, that’s bad news for Australia and another reminder of the curveball geopolitics shunting shipping markets from one direction to another in 2020 “YOU can sell your soul for a pile of soyabeans, or you can protect your people,” US Secretary of State Mike Pompeo warned Australia last year as diplomatic relations between China and Australia continued to decline in the wake of security spats. 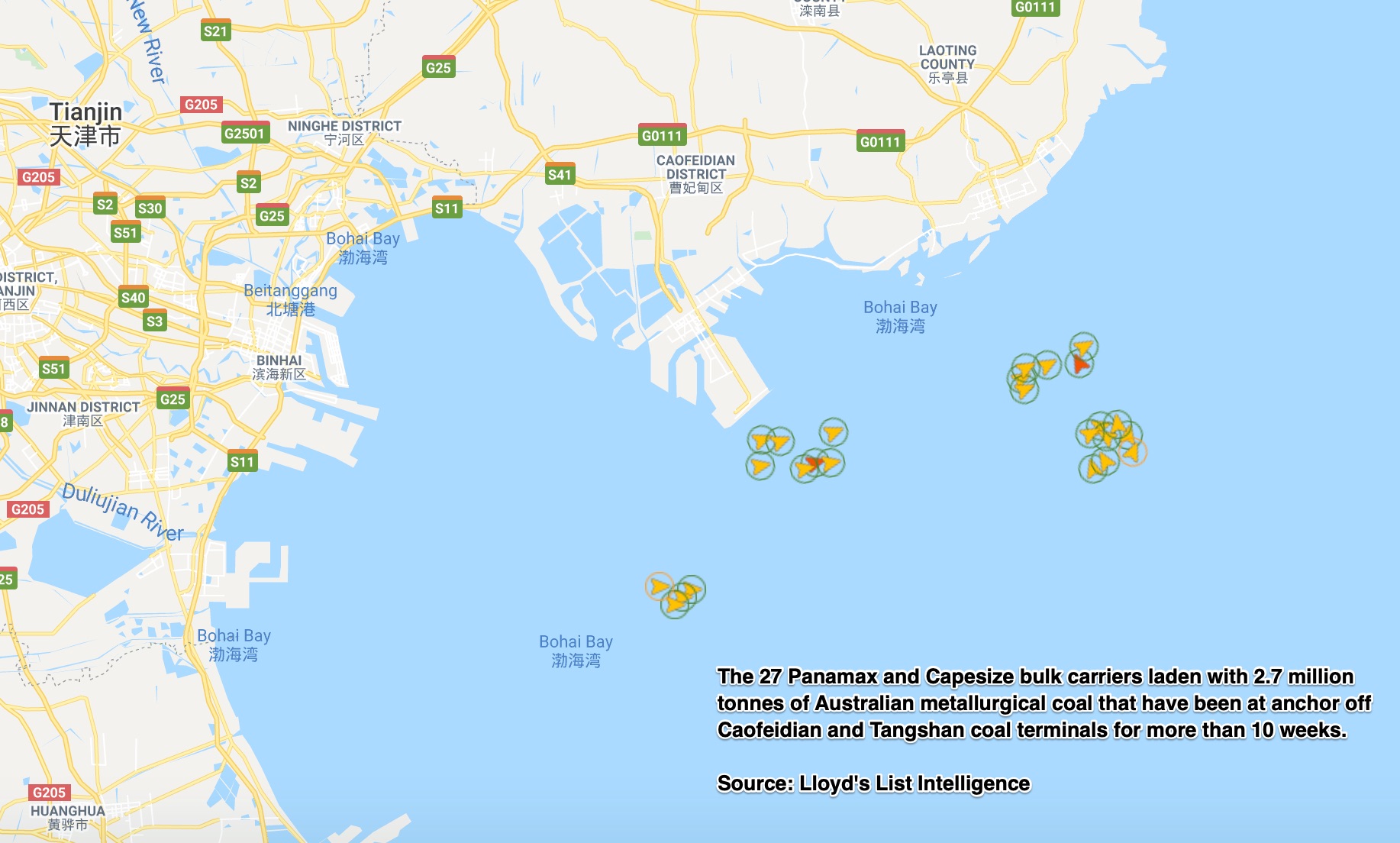 Australia does not actually sell soyabeans in any great quantity, but it does sell rather a lot of coal, $56bn to be precise, which goes way to explaining why the sight of at least 27 coal-laden bulk carriers waiting at anchorage off China’s northern Caofeidian and Tangshan coal terminals is making security analysts and economists equally uneasy.

Shipowners should also be paying attention.

Right now most are just pleased that the 10-week delay in shipments from Australia’s north Queensland coast has served as an earnings boost, briefly lending supporting to Pacific charter rates.

But these ships waiting so long to discharge serve as a reminder that the fragility of the current demand dynamics are more vulnerable to political manoeuvring than they have been for many years.

The exact reasons for delays are not clear. Initially, delays were explained away as congestion due to stockpiling and stricter implementation of coal import quotas. Then it emerged this week that Australian miner BHP’s Chinese customers have asked them to defer metallurgical coal shipments.

The security hawks immediately jumped to the conclusion that this was a clear sign of politics at play, and not without good reason.

China has already taken a range of actions against Australian exporters this year, including imposing prohibitive tariffs on barley, suspending some meat imports and launching trade investigations into wine.

Tech may have garnered the international attention when it comes to trade spats recently, but China has used trade as a diplomatic tool in many sectors before and given the anger and mistrust between the countries that has been bubbling under the surface for years, a diplomatic spat surrounding coal would not be without precedent.

Analysts have already noted a shift in political agenda that has seen China taking more coal from Russia and Mongolia over Australia, which has been very vocal about its national security concerns, voiced by politicians keen to position themselves as defending their domestic economy.

They should be wary of pushing such rhetoric too far.

More than two-thirds of met-coal Chinese imports in the first half of 2020 were from Australia, so if China is shunning Australia’s exports that is bad news for Australia.

China, meanwhile, has its own supply of domestic coal and if the increased Russian and Mongolian connections fall through, Indonesia and South Africa could easily make up for any shortfalls from Australia.

Of course, the decline in Australian coal exports might have nothing to do with diplomacy.

Slower imports could also be a signal that the strength and pace of the Asian tiger’s post-pandemic economic recovery is weaker than first thought.

Either way, these are trends that have an impact for shipping supply chains.

Such calculations are a delicate balance beyond the control of shipping, but as China prepares to advance a new export control law that would ban Chinese suppliers from dealing with specific foreign companies on national security grounds, taking a page from the US crackdown on Huawei Technologies and its peers, the shipping industry looks on with growing concern.

US foreign policy sent tanker rates soaring above $300,000 daily a year ago, oil-price wars did the same six months later.

If pandemic politics from China threatens to destabilise bulk carrier trades this could be one unexpected reconfiguration of global supply chains too far this year.