Hapag-Lloyd acquired 17 ‘LNG-ready’ containerships when it merged with UASC. One is now being converted to use LNG, but unless costs can be controlled the remainder may continue to use traditional fuels 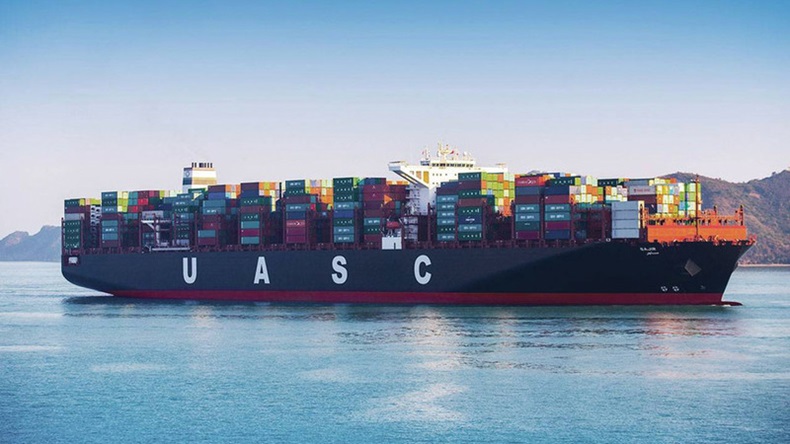 Source: Hapag-Lloyd Sajir is the first containership to undergo a conversion to liquefied natural gas.

THE conversion of existing containerships to LNG propulsion is not yet commercially viable, according to the first company to have attempted the process.

Work began last month on converting Hapag-Lloyd’s 15,000 teu Sajir at China’s Huarun Dadong yard, after being delayed by the pandemic.

However, chief executive Rolf Habben Jansen has warned that the cost of converting the ship to LNG means the decision on whether to convert any of its other vessels is on hold.

“The conversion is not trivial,” he said in a briefing.

This was despite the vessel, one of 17 it acquired through its merger with United Arab Shipping Co, being designed to be LNG-ready.

“Even then, it is turning out to be a fairly costly exercise,” said Mr Habben Jansen.

“We’ll have to see if we convert more ships. In this case, we will be looking at around $35m in investment, which we will not earn back in the lifetime of this ship.”

The cost of conversion would need to come down closer to $25m to be commercially viable, he said.

“We need to find ways to bring those costs down, otherwise it will be economically very difficult to do more ships. It has been a good pilot, but we may not be able to proceed with any more. We’re still looking at ways to get those costs down.”

The company would, however, continue to look for ways to reduce its CO2 emissions.

“We need to step up our efforts to further reduce our environmental footprint,” said Mr Habben Jansen.

“We will start making a new plan for what we will do over the next three to five years.

“It is one thing to be climate neutral in 30 years from today, but for us it is equally important that we make progress every year and that when we look back at 2020-2025, we can demonstrate that we made material progress.”

The company is already trialling the use of biofuel blends in its bunkers and would consider LNG as a power source in any newbuilding orders.

However, Mr Habben Jansen reiterated that no orders were imminent.

“We have said before that at some point, we will have to order some new ships, simply because the last order we put out was in 2015,” he said.

“We are constantly looking at that, but you should not expect that an order from us is around the corner.”

“I still think the overall picture on what future fuels will be is not yet fully clear.

“Hydrogen will definitely play a role in the future, but I think there is going to be some sort of synthetic fuel that is gas-based.”

Study examines use of hydrogen fuel cells to power containerships