Is anyone listening to the World Maritime Day sermon?

Too often shipping remains out of sight, out of mind and in the shadows, while we impotently bemoan this sea blindness internally, too few of us are prepared to put our heads above the parapet and speak out. Let’s address the real issues this World Maritime Day 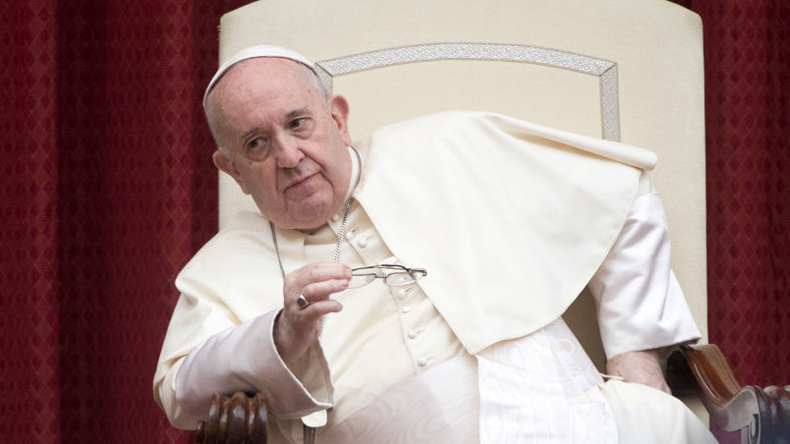 Source: Alessandra Benedetti/Corbis via Getty Images Pope Francis has felt it necessary to intercede twice this year in shipping affairs.

THE chorus of calls to resolve the crewing crisis will be sung with gusto over the next 24 hours, possibly with a few hymns to sustainable shipping tunelessly belted out for good measure.

No doubt the best of intentions will be on show for shipping’s most devout day of observance. But who exactly is this World Maritime Day display for, and will anyone be listening this year?

Those seeking to remind industry advocates of the hidden humanitarian crisis at sea will be preaching to the converted, and nobody prepared to engage with the International Maritime Organization’s holy day of celebrations will be questioning the sermon on sustainable shipping for a sustainable planet.

If this is directed at those outside shipping’s faithful, then this year more than ever it seems clear that the world is already watching and they are not overly impressed.

The fact that the Pope has felt it necessary to intercede twice this year in shipping affairs, first on behalf of seafarers stuck at sea, then with a loaded call to respect nature in the wake of the Wakashio imbroglio, is a telling indictment of where we find ourselves as an industry right now.

But divine intervention has not been sufficient to spur action it seems.

The past year has flagged up fundamental flaws in the way our industry represents itself publicly in national and internal forums, and this is much more than an internal image problem.

The alphabet soup of industry representation is fragmented and lacks unity and therefore leverage. The anachronistic regulatory oversight we do have is reactive and lacks teeth. Anaemic enforcement by shady flag registries are tacitly supported by an industry that still too often are willing and able to evade accountability.

And to those that point to progress and reform on this day of celebration, we point out that this is as much a crime of historical inertia as it is a criticism of current failings.

This crisis has been in the post for years because, as one remarkably honest owner put it recently, nobody wanted to pay tax or be regulated so we chose tiny discreet and tax friendly jurisdictions. We are still an industry living in the shadows when it suits us.

World Maritime Day is celebrated annually “to provide an opportunity to focus attention on the importance of shipping and other maritime activities and to emphasize a particular aspect of the work of the International Maritime Organization”.

“The fact that the Pope has felt it necessary to intercede twice this year in shipping affairs, first on behalf of seafarers stuck at sea, then with a loaded call to respect nature in the wake of the Wakashio imbroglio, is a telling indictment of where we find ourselves as an industry right now”

There is value in that, but let’s not sidestep the seriousness of current industry issues in favour of a promotional campaign that nobody is buying.

Those criticising the IMO for lacking the ability to resolve issues like the crewing crisis and imbue the sustainability sermons with actual progress, are missing the target. The IMO has always been an effective technical UN body, but it was never intended to be the forum within which political crises are resolved. Albert Embankment is an old temple and its arcane rituals are not the tools to fix climate change and iron out a global response to pandemics.

The IMO has many issues to resolve and in response to those calling for a move to Asia, we suggest it’s more complicated than a change of address to the highest bidder.

The perception of undue influence and infiltration of vested interests that has continued to chip away at its credibility with little more than an exasperated eye roll in response is an issue that should be given more attention.

So yes, the IMO is in dire need of reform and, yes, we could have expected a more vociferous voice beyond the diplomatic dialogues this year, but the IMO is nothing more than the collective will of its 174 member state governments.

Those governments have the agency to lead reform, so rather than carping from the sidelines and pretending they weren't complicit in the political inertia, the focus should be on national responsibilities and their accountability across the UN system.

So let’s sing loudly this World Maritime Day and preach the good news that when the world came to a standstill, the shipping industry carried on. Let’s point out that planes were grounded, trucks stopped moving, economies were shuttered, and yet the food, medicine, PPE, energy and just about everything else that keeps the world going was delivered thanks to shipping’s resilience and reliability.

Shipping had a serious image problem long before the economic tsunami of coronavirus, but it has exposed the lack of agency within the industry to leverage its role as the backbone of the global economy.

Too often shipping remains out of sight, out of mind and while we impotently bemoan this sea blindness internally, too few of us are prepared to put our heads above the parapet and speak out. This is especially, and sadly, true of those cargo interests who are most reliant on shipping and whose voices we have not heard of late.

Shipping has positive stories to tell and it is more essential than ever that we tell those stories this World Maritime Day, but it is also a time to reflect on its shortcomings and use that as the starting point to build a better future for this industry.

Time to ensure shipping is not out of sight, out of mind

Outlook: Is shipping coping with the pandemic?