Poorly packed containers have been implicated in a number of high-profile containership fire casualties. A new group has been formed in an effort to better enforce existing rules and push for better regulation 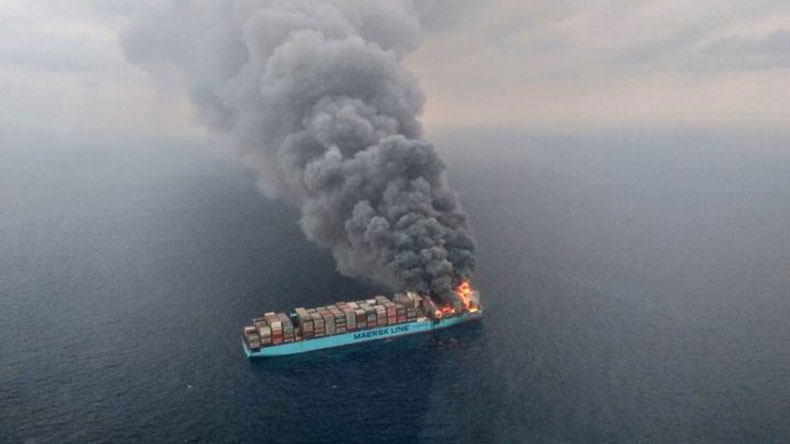 Maersk Honam was one of the high-profile casualties in which dangerous goods were implicated.

A GROUP of five organisations involved in containerised freight transport are to collaborate on new guidance on packing standards for containers and other cargo transport units in an effort to reduce the incidence of fires on board boxships.

The Container Owners Association, the Global Shippers Forum, the International Cargo Handling Co-ordination Association, the TT Club and the World Shipping Council are co-operating on a range of activities to further the adoption and implementation of crucial safety practices throughout the global supply chain, the group said in a joint release.

The joint body, the Cargo Integrity Group, has published a quick guide to the UN-sponsored Code of Practice for Packing of Cargo Transport Units (the CTU Code), together with a checklist of actions and responsibilities for the guidance of those undertaking the packing of cargoes in freight containers specifically.

“There have been several widely reported container fires on board ships, where containerised cargoes may have been the cause of, or contributed to, such fires,” the CIG said.

“The organisations believe that consistent, widespread and diligent adherence to the CTU Code by all parties within global CTU supply chains would significantly reduce these types of incidents, some of which have resulted in fatalities and serious injuries among ships’ crews and shore-side staff.”

Other casualties, such as container stack failures, vehicle roll-overs and train derailments could also be traced to poor packing practices. The organisations said that a greater awareness of the CTU Code and the packing practices and techniques it contains would help to reduce such incidents.

“A key objective of our mission is promoting awareness of the CTU Code,” said ICHCA technical adviser Richard Brough.

“We have a dedicated set of outcomes designed to achieve this aim, which begins with the publication of our CTU Code — a Quick Guide. We want the code to be as accessible to as many operatives as possible and hope this Quick Guide will encourage them to learn how the code can be applied to their own particular needs.”

Part of the challenge would be to create the necessary awareness of the CTU Code to the wide number of businesses active in the intermodal supply chain.

“Our organisations cannot do this on their own and we are reaching out to other bodies in the supply chain and in governmental agencies to join with us in promoting high standards of the packing of all cargo transport units and understanding the inter-connectedness of differing objectives,” said GSF secretary-general James Hookam.

As well as promoting the CTU Code, the CIG plans to seek regulatory changes to improve the clarity, implementation and enforcement of rules such as the Maritime Dangerous Goods Code, and supporting enhanced cargo screening processes and more effective container inspection regimes.

“Working closely with other partners, we have been able to ensure the launching of a considered review of the maritime Special Provisions in the IMO’s International Maritime Dangerous Goods Code. Such Special Provisions may today lead to exemptions from the Code’s safety and documentary requirements with the result that the carrier may not be able to take necessary precautionary measures.”