The attitude that many world leaders seem to have adopted, from China to India, to forget or ignore stranded seafarers will become slightly more difficult to maintain when the supply chains that bring food and medicine to supermarket shelves begin to shut down

While efforts have been made by international maritime groups to help facilitate crew changes, it has become apparent that seafarers are the victims of a lack of leadership and co-ordination on a global scale, says the UK’s former shipping minister 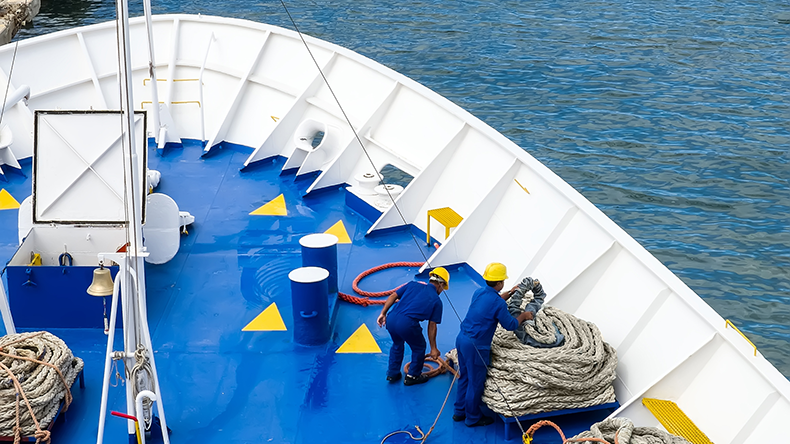 Source: Modustollens / Shutterstock.com Refusal to allow crew changes or shore leave at ports have been an all too common occurrence during the pandemic.

THOUSANDS of lives have been lost and the global economy has been set back by many years. But there is another pandemic taking place behind the scenes — a hidden pandemic that has already caused pain and suffering to many, but which may still lead to a myriad of unintended but disastrous consequences.

The issue I am, of course, raising is that of the plight of seafarers the world over.

Without our seafarers and their skills, we would be in a vastly different situation to where we are now — facing empty supermarket shelves and shortages of essential goods.

And yet, still many of them — around 200,000, no less — are still stuck on board due to the lockdown and unable to be with their loved ones — and this has been the situation for months, sometimes years, on end. I first raised this issue many months ago, and despite much progress, a minority of countries are still holding our seafarers to ransom.

This is an issue that everyone must wake up to. About 80% of world goods are carried by ships. For Britain, around 95% of our imports and exports in goods are moved by sea, including 25% of the UK’s energy supply and 48% of the country’s food supplies.

Nor is seafaring just about the ships themselves. There is an entire industry of professional services around maritime trade.

The City of London, for example, is a global leader in this area, with its unparalleled expertise in law, arbitration, shipbroking, financial services and consultancy.

Indeed, the largest share of worldwide marine insurance premiums and shipbroking transactions occur in the UK, comprising 35% and 26% of the global market respectively, and these maritime services are embedded within the City’s wider financial sector, where London also continues to be a premier hub.

Secretary-general Kitack Lim says that if the crisis is not resolved soon, ships’ exhausted crews will not be able to operate safely. The IMO and other groups are organising a side event at the UN General Assembly from September 22 to highlight their plight.

Maritime is quite simply the facilitator of free trade and our market economy, the tool that powers the global engines of prosperity and growth. Yet more than 200,000 seafarers are currently stuck at sea, due to the failure of the global diplomatic community to make an agreement on crew changes in light of the travel restrictions imposed as a result of coronavirus.

Since March, many countries have refused to allow crew changes at ports or shore leave, forcing mariner contracts to be extended. Some seafarers have been on board their vessels for over 15 months. And while some are being paid for this extra time, they are doing their jobs without the breaks they are entitled to, often working 12 hours a day, seven days a week, putting their physical and mental health at risk.

Even in a landlocked constituency such as my own of Wealden, one local resident wrote in and told me that ships are now sailing the seas in “unseaworthy” conditions due to the “extreme mental and physical stress” of seafarers. He fears that these grave health and safety concerns are only going to become worse.

The situation is already dire. At Tilbury docks, 47 mainly Indian seafarers from the passenger vessel Astoria recently went on hunger strike, after weeks of pleas to their employer for back pay and repatriation produced no results.

Tragically, a number of suicides have been reported around the world, and suicide attempts onboard ships stranded offshore or in port are now the foremost cause of deaths among seafarers.

These are key workers. They are what keeps freight travelling around the world, and some of them have not had a day’s break in months. We can only begin to imagine the horror of their plight, or how it must feel when many governments around the world simply turn a blind eye to their despair and exhaustion.

These men and women have been in this position for simply too long.

While many of us are struggling with the restrictions imposed by coronavirus, at least most of us still have a semblance of normality. Seafarers, however, have no such comfort. They do not go home every night to help with the homework and put the kids to bed — they are busy delivering all the goods that we depend on for our survival, most notably our food, medicines and fuel.

The ‘out of sight, out of mind’ attitude that many world leaders seem to have adopted, from China to India, will become slightly more difficult to maintain when our supply chains that bring food and medicine to our supermarket shelves begin to shut down.

The International Maritime Organization and the International Chamber of Shipping have done a tremendous job putting forward a 12-step plan for countries to implement safe crew changes.

But it has become increasingly apparent over recent weeks that there is a tragic lack of leadership and coordination on a global scale — and the countries who are not following the rules must be the focus of organisations such as the IMO. There are simply no room for excuses when it comes to a matter such as this.

The UK is the world’s leading maritime nation and we are also home to the IMO, which gives us a unique responsibility in leading on this crisis. And progress can be made if we put our minds to it, and if ‘Global Britain’ takes a lead in drilling home a solution.

Not so long ago, in 2018, when I was minister for maritime, for example, with the IMO on our doorstep, we did deliver a historic emissions commitment. This is of even greater importance, people must always come first — so let’s rise to an even greater challenge now and save global supply chains from crashing to a disastrous halt.

Nusrat Ghani is a UK Conservative Party politician. She is a former Parliamentary Under-Secretary of State at the Department for Transport where she was responsible for maritime