New tunnels creating a vital roadway link under the Suez Canal provide SCCT access to the previously inaccessible lucrative Egyptian market. The transhipment facility is now looking to elevate its status in the region as a dual hub, offering a new gateway proposition to customers 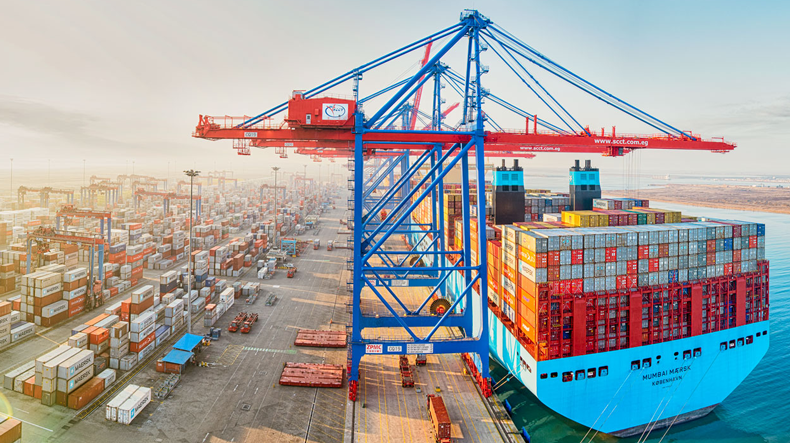 As well as being a transhipment hub, SCCT is now positioned as a key gateway for Egypt.

THE Suez Canal Container Terminal, located on the eastern side of Egypt’s Port Said, has long been established as one of the key transhipment hubs in the east Mediterranean, serving as a vital stopover for east-west cargoes transiting the famous waterway that bears its name.

However, SCCT is reinventing itself as a dual hub, or hybrid facility, off the back of a landmark infrastructure project that looks set to be a game changer for the terminal and its customers.

The Egyptian government recently opened a series of road tunnels underneath the Suez Canal, including two near Port Said, as one of the main projects under its wider ‘Egypt Vision 2030’ initiative to boost economic growth in the country.

The tunnels have created vital links between the east’s sparsely populated Sinai Peninsula and Egypt’s industrial heartland and capital Cairo in the west. Journeys that previously took hours — or even days — can now be completed in a matter of minutes, and 24/7.

For SCCT, located on the eastern side of the canal, this provides a newfound opportunity to tap into a lucrative and previously inaccessible market, according to its chief executive, Lars Vang Christensen.

“We are now extremely well connected to all the key industrial areas in and around Cairo — so as well as being a transhipment hub, we are now positioned as a key gateway for Egypt,” he says.

“More importantly from a customer perspective, they can actually leverage on both of these options by having a hybrid service.”

The option of handling gateway cargoes adds to an already impressive offering to customers utilising SCCT.

Not only does the modern terminal boast one of the highest levels of crane productivity in the whole Mediterranean, deepwater berths catering for the largest containerships on the water, ample yard space and long quay walls — but it also requires only minimal deviation for lines transiting the Suez Canal. In this case, the terminal is literally a stone’s throw away from the key trade route.

“When convoys travel through the canal, we can just bring ships out or phase them directly into the convoy,” explains Mr Christensen.

In terms of numbers, SCCT is already reaping the rewards of its unrivalled regional proposition.

The Port Said terminal has witnessed a 20% year-on-year hike in total port liftings over the past two years — and, more significantly, a 65% jump in gateway traffic in the past 12 months. This increase is even more impressive, considering this has come amid a global pandemic.

With SCCT majority owned by global port operator APM Terminals — which has more than 70 terminals under its portfolio, including a significant number handling predominately gateway cargoes — Mr Christensen says this has helped to smooth its transition into a hybrid port.

“Their expertise has been invaluable,” he says.

This goes to explain why SCCT has also embarked on a significant investment programme to upgrade terminal equipment, costing more than $60m, in preparation for an influx of cargo.

Everything is in place for SCCT to become a regional hub to envy all its rivals.

One Hundred Ports: A simpler time