Today is Merchant Navy Day, a reminder of the ships and their crews bringing commodities and goods whatever the weather or circumstances

The seven seas are an unforgiving environment and heavy seas, storms, hurricanes and danger are ever present. Over 100 merchant seafarers died last year 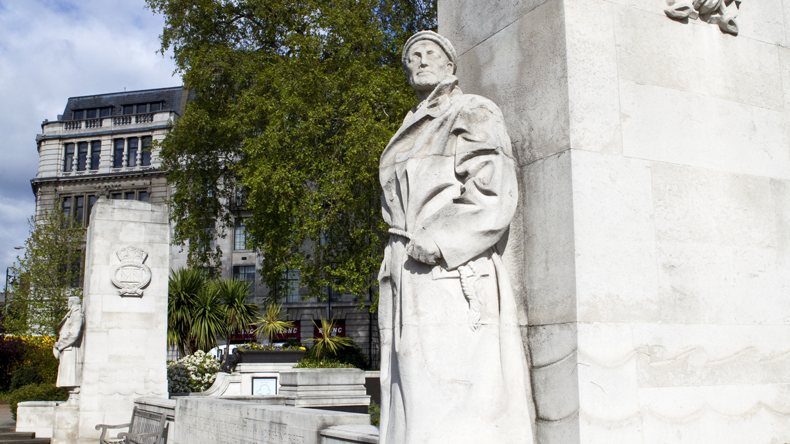 Source: chrisdorney/Shutterstock.com The Merchant Navy Memorials at Tower Hill, London, honouring seafarers who lost their lives in the First and Second World Wars.

Early lockdown panic buying caused shortages. Supermarkets and suppliers did their best to steady the ship and soon most of us could again buy essential goods.

One reason that was possible was the same reason it’s been possible for our having uninterrupted supplies of most things for most of our lives — merchant ships bring goods to our ports 24/7/365.

Some 95% of UK trade by volume (75% by value) comes and goes by ship. Merchant seafarers are often unsung heroes in our nation’s story, their ships bringing energy supplies and goods to our islands whatever the weather or circumstances.

Over 30,000 merchant seamen lost their lives in the Second World War (a death rate higher proportionately than in any of our armed forces), merchant ships carrying the food, fuel, armaments and troops essential to victory around the globe.

The seven seas are an unforgiving environment and, while sailors sometimes enjoy calm seas and a prosperous voyage, heavy seas, storms, hurricanes and danger are ever present — over 100 merchant seafarers died last year. Early this year cruiseships were at the centre of another storm — Covid-19.

Over 50,000 other ships — bulk carriers, general cargo, specialist and containerships, tankers, ferries and trawlers — have, however, continued to ply the seas, wearing our Red Ensign or Blue Ensign or flags of other seafaring nations.

Twenty million containers are crossing the globe right now. Of the world’s 1.6 million merchant seafarers some 300,000 are stuck at sea, unable to leave their ships, world travel restrictions having denied routine crew changes.

For many seafarers life is hell right now, without them your life might be hell too. Let’s salute merchant seafarers — our essential workers at sea.