Meanwhile, the coronavirus pandemic continues to accelerate investment in digitalisation

Otherwise unlikely collaborations are forming among leading companies in shipping as the sector looks for ways to solve the conundrum of decarbonisation. Meanwhile, more investments are being made in digitalisation projects, particularly in logistics 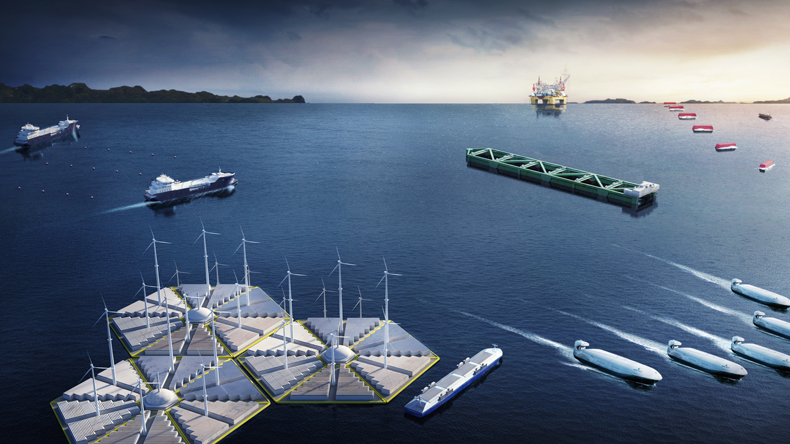 Decarbonisation is not a problem that shipping can solve on its own.

MAERSK and CMA CGM are among the container lines that are launching or joining consortia to push forward shipping’s decarbonisation agenda.

Maersk, the largest container shipping line in the world by capacity, has been a pioneer in this regard and in 2018, it announced plans to have a carbon-neutral vessel on the water by the end of the decade.

The rationale for the move was that a ship built in 2030 would still be operational in 2050. If the industry wanted to reach carbon neutrality by mid-century, it had just over 10 years in which to find a solution. It also said it wanted to work with all the constituents in the supply chain, be they current manufacturers, suppliers or competitors, and was seeking to tap into new innovations and work with governments around the world.

The seeds of those initial ambitions have resulted in the Maersk Mc-Kinney Moller Center for Zero-Carbon Shipping.

Stevedoring Services of America said its project of retrofitting some 13 gantry cranes will cut diesel emissions by 95% and eliminate 15,600 tonnes of greenhouse gas emissions a year

The centre, launched with the backing of the AP Moller Foundation, the Maersk Mc-Kinney Moller family-run fund, is a coalition of seven maritime groups, including Maersk and NYK, that will see some of the biggest names in the sector collaborating through an established institution rather than via a coalition or for the purposes of a single pilot project.

Rival French carrier CMA CGM was an initial supporter of Maersk’s moves to seek industry collaboration on carbon emissions. While it did not join Maersk’s venture, it has since launched a similar programme with the same goals.

CMA CGM has teamed up with 10 partners to form a coalition that seeks to accelerate the development of energy sources and technologies to address the challenges posed by “sustainable mobility in the transport and logistics industry by reducing emissions, fighting global warming and protecting biodiversity”.

As with Maersk, it is looking beyond the shipping sector and its members include customers, financial institutions, energy company Total and engineering group Wärtsilä.

The key to both Maersk’s and CMA CGM’s efforts is the realisation that the decarbonisation of shipping is not a problem that the industry can solve on its own.

One of the key challenges to achieving emission reductions in future will be the development of new fuels in the coming years.

But as Ed Fort, global head of engineering systems at Lloyd’s Register, told Lloyd’s List this week, the alternatives to fossil fuels will likely present new safety concerns to which the industry has very little experience.

“While all fuels pose a potential safety risk, the storage and combustion of hydrogen and ammonia — in particular within the confines of a ship — represents a significantly greater safety risk than that associated with the long-established residual and distillate fuel oils,” said Ed Fort, global head of engineering systems at Lloyd’s Register.

Like natural gas, hydrogen and ammonia are ‘low-flashpoint’ fuels that exist as gas under ambient conditions and are generally stored as liquids.

Fuel oil products with off-spec sediment content have resurfaced in the Amsterdam-Rotterdam-Antwerp region after a similar high-sediment level problem was found at the start of the year, as well as in Singapore. While concerns about off-spec bunkers have grown as more blends enter the bunker stream in the wake of IMO 2020 regulations

However, hydrogen is much more easily ignited than natural gas, with even a weak static discharge enough to ignite hydrogen in air. It is also flammable over a much wider range of air concentration and can explode under certain conditions.

Ammonia is not explosive and is easier to store, since it does not need to be kept as cold as hydrogen. It also does not burn easily, which is a trait that creates headaches for engine producers.

Another issue is that ammonia is highly toxic and even relatively low concentrations in air can harm or kill. It is also corrosive, can cause skin burns and is highly soluble in water.

Mr Fort recommends that shipping looks to other industries more familiar with ammonia and hydrogen to understand what best practice means.

“The use of hydrogen and ammonia as marine fuels is not business as usual,” he says. “The potential prize of zero-emission vessels is huge, but it will come at a significant cost to the industry, which needs to be recognised and accounted for at the outset.”

Meanwhile, South Korean shipping line HMM has teamed up with Hyundai Heavy Industries and three other local partners to test the use of bio-heavy oil on a container ship.

HMM, which has committed to carbon neutrality by 2050, will test-run one of its 13,100 teu containerships with a bio-heavy oil blend. Bio-heavy oil is produced from unused resources such as animal and vegetable oils and by-products from biodiesel refining processes.

The coronavirus backdrop has seen an explosion of interest in digital investment as companies look to streamline and update their operations, in particular around logistics.

As well as being at the front of the pack in decarbonisation, Maersk wants to also lead the way in the digitalisation of the container sector. This week it announced it has invested in Australian logistics start-up Ofload through its venture arm Maersk Growth.

Alongside another investor, Global Founders Capital, it provided A$2.8m ($2m) to the digital platform, which live-matches reliable shippers and container truckers to reduce empty miles, idle time and shipment costs for small and medium-sized businesses.

Ofload, established in February 2020, claims to have more than 700 carriers on board, with a fleet of some 15,000 trucks nationwide that shippers can “access at the click of a finger”.

“We have monitored this space for years and invested in teams around the world succeeding in bringing shippers and carriers into the digital world,” said Mr Høier. “All supply chain stakeholders will benefit from Ofload’s technology, not least shippers looking to reduce their carbon footprint, as empty truck moves will be optimised.”

The disruption to cargo demand caused by the coronavirus pandemic has been a catalyst for digitalisation in the containers space, according to Zhou Shihao, founder and chief executive of Shanghai-headquartered YQNLink, an online logistics platform that aims to provide one-stop services.

Speaking to Lloyd’s List says the changing dynamic in the sector has forced suppliers to increasingly take a short-term view on their production and logistics schedules, which has resulted in more bookings placed or cancelled at short notice.

“Digitalisation has a greater implication on those out-of-the-blue events that are likely to become part of the new norm of the future logistics chain,” says Mr Zhou. “Players who cannot cope with the changes will see their costs climb and be eliminated by the market.”

The container line shipping sector now appears to be moving in the right direction though, he argued, with the maturing of online slot reservation systems, cargo tracking solutions and the slow but growing adoption of electronic documentation, among other efforts.

Box lines set to shrug off negative impact of pandemic